Less than six months after he announced plans to release a civilian flamethrower on the commercial market, Elon Musk has actually delivered:... 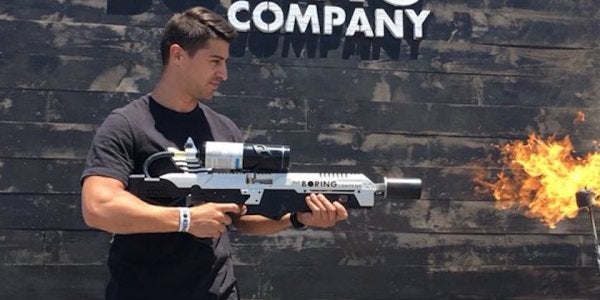 Less than six months after he announced plans to release a civilian flamethrower on the commercial market, Elon Musk has actually delivered: At least 1,000 happy campers picked up their very own Boring Company flamethrowers on June 9th at the parking lot of Musk's SpaceX headquarters outside Los Angeles.

The $800 commercial flamethrower garnered significant attention from both consumers and lawmakers, the latter of which quickly introduced legislation in the House of Representatives to effectively ban the purchase of any sort of incendiary flame cannon by civilians. Luckily, Musk thought of that … kind of!

Almost forgot! Due to recent regulatory/customs rules enacted to inhibit transport of anything called a Flamethrower, we have renamed our product: “Not a Flamethrower”.

The move may not end up making much sense given the flamethrower's unique status under the National Firearms Act, as I previously reported back in February. “If [Congress] is going to actually pass legislation on , they have to regulate them as firearms,” Rick Vasquez, a retired Marine Corps master sergeant and former weapons technology specialist at the Bureau of Alcohol, Tobacco, Firearms, and Explosives, told T&P; at the time. “And that means they need to change the definition of what actually constitutes a ‘firearm’ before they can even think about regulating them.”

But I don't blame Musk for covering his ass. Just take a look at the Terms & Conditions of the new Boring Company Flamethrower Not A Flamethrower:

Please use as directed to avoid unintentionally burning things down. For simple & concise instructions, we drew upon wisdom in great Dr Seuss book “Green Eggs and Ham”. #ThrowFlamesResponsibly pic.twitter.com/kgj8W8EOLJ

But enough about the legality of the Not A Flamethrower: How does the thing actually work as a product? Here's what some of the early reviews say, mainly this one from reliable consumer tech outlet The Verge:

I love it. Is it a Bunsen burner, a propane torch or a flamethrower? I extremely do not care. It is a surprisingly heavy gun-like device that shoots flames. It’s definitely less dangerous than a can of hairspray and a match, or less dangerous to the person shooting flame anyway. And it feels like a cohesive product, no matter how it was actually designed. This might explain why people are so fervent about Musk: he took a joke and made a real, fun thing.

I aim my fire at the marshmallow — I am not above beating a dead horse — and increase the flow of propane. The wind is blowing toward me, though, and that makes the heat from the flame also blow toward me, and between the sun and the pavement and the heat, I am let’s say a bit warm. After about 30 seconds, I screw the propane valve closed and give the flamethrower back.

Mmm … marshmallows. We'll have to give the Not A Flamethrower a once-over for ourselves, but maybe it will make a fine addition to our list of essential camping gear. Maybe.