Why The Government Can’t Stop Elon Musk’s Flamethrower, According To A Former ATF Weapons Expert

Ever since billionaire entrepreneur Elon Musk unveiled his slick new commercial flamethrower for the low, low price of $500, Americans... 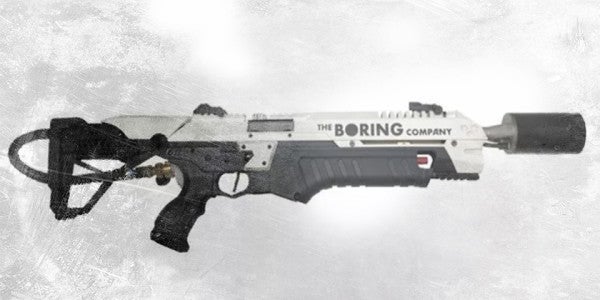 Ever since billionaire entrepreneur Elon Musk unveiled his slick new commercial flamethrower for the low, low price of $500, Americans have been scrambling to stake their claim to the incendiary gadget. By Feb. 1, Musk’s Boring Company announced it had sold a whopping 20,000 flamethrowers. “When the zombie apocalypse happens, you'll be glad you bought a flamethrower,” Musk joked on Twitter. “Works against hordes of the undead or your money back!”

Whether or not the Boring Company flamethrower actually constitutes a proper incendiary cannon is a matter of debate. Indeed, footage of prototypes in action is more reminiscent of an oversized butane-jet lighter than the fiery liquid mixture of nitrogen propellant and gasoline that defined the Army’s M2 flamethrower during the Vietnam War.

Regardless, lawmakers are already looking to rain on your future fiery parade. As flamethrower pre-orders were burning up the Boring Company website, New York Democratic Rep. Eliot Engel introduced legislation in the House of Representatives to effectively ban the purchase or possession of any sort of incendiary flame cannon by civilians.

H. R. 4901, also known as the “Flamethrowers? Really? Act,” would solve the legal ambiguity surrounding Boring Company’s new gadget by amending Title 18 of the U.S. Code to include a federal definition of a “flamethrower” as “any non-stationary or transportable device designed or intended to ignite and then emit or propel a burning stream of a combustible or flammable substance a distance of at least 6 feet.”

Related: The Tactical Case For The Flamethrower »

If passed, the legislation would effectively stick flamethrowers into the U.S. criminal code of the federal government. Sounds serious, right? Maybe not: According to Rick Vasquez, a retired Marine Corps master sergeant and former weapons technology specialist at the Bureau of Alcohol, Tobacco, Firearms, and Explosives, it’s unlikely Congress will ever manage to legally stamp out the civilian flamethrower.

“I’m very pro-gun, even though I worked for the ATF, and I’m very pro-Second Amendment, but even I don’t see any federal law going forward on this,” Vasquez told Task & Purpose. “If [Congress] is going to actually pass legislation on , they have to regulate them as firearms. And that means they need to change the definition of what actually constitutes a ‘firearm’ before they can even think about regulating them.”

It’s not that the federal government is helpless to act: As a law enforcement organ of the Department of Justice, the ATF can issue its own rules and regulations without the direct input of Congress. Indeed, the National Firearms Act, first passed in 1934 in response to the rise of organized crime during Prohibition, was designed to bring items detailed under Title 18 under the regulatory supervision of the ATF — especially in interstate cases, where the federal government had clear jurisdiction.

But the NFA is technically part of tax law under Title 26, the Internal Revenue Code, and the ATF can’t technically regulate flamethrowers until there’s a distinct legal definition of the item. And for decades, there was never a need for that, since the only flamethrowers circulated on the commercial market after World War II were the M2 variants eyed by collectors and history buffs.

A change to the NFA tax provision may require a new flamethrower definition in the U.S. criminal code, but in the current political climate, lawmakers will have a significantly easier time amending the tax code to update the NFA than getting anywhere near anything related to guns in the U.S. code. “Nothing is difficult if Congress wants to pass a new law, and according to this administration, there will be no new firearms laws,” Vasquez told Task & purpose. “Changing the NFA wouldn’t be difficult because, as we just saw, changing the tax code isn’t as difficult as amending gun laws.”

On a purely legislative level, Vasquez is absolutely right: Rep. Engel introduced virtually the exact same legislation back in January 2016, only to see the bill smothered to death in committee. “This bill is a solution in search of a problem that does not exist,” Firearms Industry Consulting Group lawyer Joshua Prince told Guns.com at the time, adding that Engel “appear completely unaware of the lawful uses of flamethrowers” like controlled burns.

The fervor around the Boring Company flamethrower appears to have challenged that calculus. While Maryland and California are the only states with restrictions on the books, lawmakers in the wildfire-ravaged Golden State are already moving to ban the incendiaries outright. “We don’t allow people to walk in off the street and purchase military-grade tanks or armor-piercing ammunition,” Los Angeles assemblyman Miguel Santiago said in a Jan. 28 statement. “I cannot even begin to imagine the problems a flamethrower would cause firefighters and police officers alike.”

NO FLAMETHROWERS IN CALIFORNIA, SAYS ASSEMBLYMAN. LOOKING AT YOU @elonmusk pic.twitter.com/qCK2iCf9eP

It’s exactly this reason that a federal ban is ill-advised, Vasquez says. If it’s a question of public safety, you can do plenty more damage with household objects than the piddling flame of Musk’s Boring Company flamethrower, and an overly broad ban would end up having unintended consequences.

His assessment of the Musk flamethrower echoes that of other flamethrower enthusiasts: You face more of a threat from a teen boy in the throes of adolescent pyromania with a lighter and can of hairspray than your local hipster with the high-tech gadget. So why adopt a ban on the former that would put regulatory restrictions on the latter.

“For one thing, what’s gonna do, run into a crowd and burn people?” Vasquez said of Musk’s flamethrower. “Why wouldn’t he just fill a Super Soaker with gasoline and spray everybody and throw a lighter on ‘em? Just think about one of those pressurized garden sprayers filled with kerosene so it doesn’t degrade the O-ring. That’s 10 times more dangerous than what [Musk] has, and there are too many other items like it.”

“When I first saw one, I just started laughing,” Vasquez said of Musk’s flamethrower. “What are these guys going to think of next?”

Want to read more from Task & Purpose? Sign up for our daily newsletter