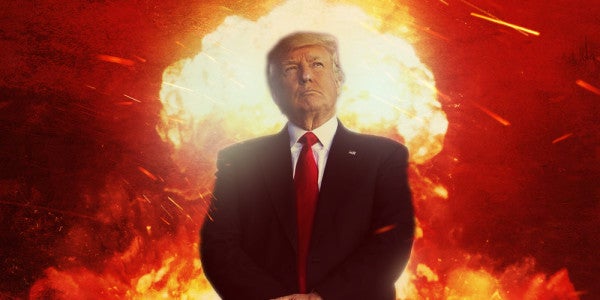 During the November 2017 Halifax International Security Forum, the Air Force Gen. John E. Hyten, commanding general of U.S. Strategic Command, responded to a question about a hypothetical order from President Donald Trump to launch a nuclear strike, saying: “I provide advice to the President. He’ll tell me what to do, and if it's illegal, guess what's going to happen? I'm gonna say, 'Mr. President, that's illegal.' Guess what he's going to do? He's going to say, 'What would be legal?' And we'll come up with options or a mix of capabilities to respond to whatever the situation is, and that's the way it works. It's not that complicated.”

The response by Hyten, who as chief of the U.S. combatant command in charge of nuclear deterrence has some unique insights on the matter, touches on a number of fundamental questions regarding the the legality of the U.S. nuclear strategy, questions that have proven to be vexing policy issues for strategic leaders since nuclear weapons were first invented. And those questions became even more relevant a few weeks later, when Trump and Kim Jong Un engaged in a tense, taunting exchange over the “nuclear buttons” that was shorthand for the destructive power of their respective nuclear arsenals and their personal authority to employ them. The terrifying prospect of a nuclear exchange probably is more likely than at any point in the past 30 years.

The legality of ordering nuclear strikes boils down to two fundamental issues: the legal authority of the president to order a preemptive or offensive nuclear strike, and the legality of the use of nuclear weapons themselves. The answer to the former is surprisingly simple and the latter is remarkably complex — and although the relevance of a nuclear strike’s legality is a different question entirely (when the fate of the world hangs in the balance, questions of legality may pale in comparison to the potential consequences), the international legal system still shapes state behavior in advance of state action.

The legal authority to order the strike

Shockingly, Hyten apparently misunderstands the issue wholesale or misstated his understanding. He is correct that “it’s not that complicated” but for the wrong reason: It’s because the president has unreviewable, unquestionable authority to launch a strike on his own constitutional authority as the commander in chief.

Indeed, Trump really does enjoy a large nuclear “button.” It is not a literal button, but rather the “button” represents the amalgamation of an enormous set of nuclear capabilities, weapons, delivery systems, and authorities for employment. To that end, he enjoys unreviewable, unlimited Article II authority to employ all the arms — including nuclear arms — in the nation’s arsenal in self-defense, including anticipatory self-defense. There are no fail-safes built in, other than a military or secretarial refusal of the president’s presumptively lawful order to launch, based on 25th Amendment/Section 4-type concerns regarding the president’s mental stability (and therefore on the lawfulness of his order). There are no approvals or consultations required. The decision literally resides, constitutionally, in his sole discretion — a troubling prospect, to be sure, no matter who is in office.

Related: The White House May Go Nuclear In Response To Future Cyberattacks — Literally »

Internal executive branch procedures offer an opportunity for “consultation” with the secretary of defense and the commander of U.S. Strategic Command, but the president has no legal requirement to conduct such consultations. For the purpose of determining whether the president has authority unilaterally take action against a national security threat, nuclear weapons are no different than conventional weapons: He can simply decline to consult and order the strike.

Similarly, there is no legislative constraint, though Congress has recently taken an interest in a statute that would purport to limit Trump’s authority. (Whether the courts would uphold such a statute in the face of an inevitable legal challenge, is an open question, but we view it as an unconstitutional usurpation of the president’s commander-in-chief power.)

Hyten’s description of the colloquy with the president is certainly a realistic possibility. If the president accepts the opportunity to consult, that is the general’s, and the secretary’s, opportunity to raise the issue of legality of the strike. But even with consultations, the orders of a superior, under military tradition and law, are presumptively lawful: The Manual for Courts-Martial, a virtual restatement of the military law binding on Hyten as a commander, notes an “order requiring the performance of a military duty or act may be inferred to be lawful and is disobeyed at the peril of the subordinate,” although “this inference does not apply to a patently illegal order, such as one that directs the commission of a crime” — including, it seems, a “war crime.” In other words, all orders are presumed lawful unless patently unlawful, including an order to commit a crime.

A military aide carries the nuclear football as he prepares to travel with U.S. President Donald Trump on Marine One at the White House, February 3, 2017.Olivier Douliery/Abaca/Sipa/Associated Press

The lawfulness of an order

So when is an order lawful? One instructive military appellate case notes a lawful order has three essential components: “(1) issuance by competent authority — a person authorized by law to give such an order; (2) communication of words that express a specific mandate to do or not do a specific act; and (3) relationship of the mandate to a military duty.” In other words, all military orders — including an order to launch nuclear weapons — are presumed legal in the absence of manifest illegality.

Hyten’s commentary, if it reflects his true understanding of the dynamic, is troubling for two reasons. First, his comments presume there is time available for such a conversation: Assuming the ordered strike is a massive counter-barrage of nuclear weapons in response to a single nuclear weapon employed against a U.S. military or civilian target, the decision cycle would be compressed. It would take time to detect the nuclear weapon launch, assess and confirm it as a nuclear weapon launch, brief the president and his principal assistant the secretary of defense, receive the order, and execute the counterstrike — insufficient time for an extensive discussion about the legality of the order.

Related: Should Presidents Be Required To Physically Murder An Aide In Order To Launch Nukes? »

This is one of the exact reasons for the presumption of legality of orders: If orders are presumptively valid, they can be instantly executed in circumstances in which prompt obedience can be the difference between life and death, success and failure. In the absence of manifest illegality — for example, a deliberate, unprompted, offensive targeting of a purely civilian target with no military necessity — there is no authority to delay the execution.

Second, Hyten presumes the authority to determine whether a particular ordered use of nuclear weapons is lawful or unlawful. “Mr. President, that’s illegal” presumes Hyten would have a better idea of the lawfulness or unlawfulness of the use of a nuclear weapon in a particular manner. This is a curious proposition, in that it implies Hyten’s military lawyers in Nebraska are more well-versed on international law than all the lawyers advising Trump at the White House Counsel’s office, the Department of Justice Office of Legal Counsel, the National Security Council staff, and the general counsels at the departments of State and Defense. Moreover, and more importantly, unless the president’s order were manifestly unlawful, it is inappropriate for the general to even raise the issue. His duty is to presume lawfulness unless patently unlawful, and execute the order.

The lawfulness of nuclear weapons in general

The issue of whether a nuclear weapon can ever be lawfully employed is potentially undeterminable. There are no treaties directly on point regarding the lawfulness of the use of nuclear weapons, and no international legal regime clearly prohibits their use, so long as they are employed consistently with the law of armed conflict, as with any other weapon or capability.

Moreover, no court has ever definitely decided the question, though the International Court of Justice gave the most helpful guidance available in a 1996 advisory opinion requested by the UN General Assembly: While the unique and horrific destructiveness of nuclear weapons is “scarcely reconcilable with respect for ,” the ICJ wrote, they remain a legitimate last-ditch tool of survival for modern governments despite the difficulties in determining factors like necessity and proportionality that govern the use of conventional weapons.

Finally, the precedent on point is minute: Two uses of nuclear weapons in all of history. There simply have not been many opportunities to examine the issue of the legality of the use of these awful, destructive purveyors of death, leaving most of the work in this field to academic commentary.

In short, the president enjoys ample, personal authority as commander-in-chief under domestic U.S. law to employ nuclear weapons. As the North Korean crisis continues to intensify, it is less than reassuring to encounter the legal realities regarding the use of nuclear weapons; yet, we must confront them as we trust our political leaders to manage the situation responsibly.