A squad-sized detachment of extra Marine security guards has arrived at the U.S. embassy in Haiti as the impoverished Caribbean... 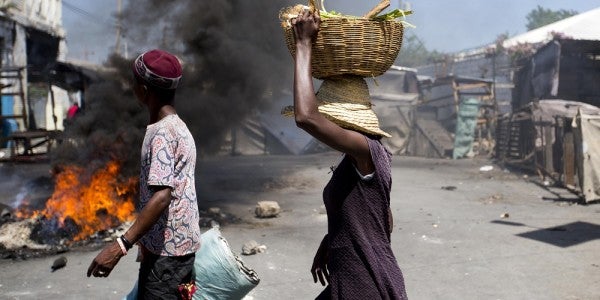 A squad-sized detachment of extra Marine security guards has arrived at the U.S. embassy in Haiti as the impoverished Caribbean nation is racked by riots over high fuel prices, a U.S. official confirmed.

CNN first reported on Tuesday that the Marines were en route to Port-au-Prince to reinforce security guards and State Department personnel already at the U.S. embassy.

The detachment comes from the Marine Security Guard Augmentation Unit in Quantico, Virginia, which can be called upon by any ambassador when a diplomatic post overseas comes under threat, a U.S. official told Task & Purpose.

Defense officials deferred comment on the Marines to the State Department on Tuesday.

Haitian street demonstrations and violence spiked on July 6 after the government tried to raise the price of gasoline by 38% and kerosene by 51% to balance its budget, according to media reports. Although the Haitian prime minister suspended the price increases the following day, unrest has continued.

At least four people have been killed in the rioting and armed groups have established roadblocks in parts of the country, according to Voice of America.