Group of American vets detained in Haiti on weapons charges brought back to US, arrested upon landing

A group comprised of former U.S. military veterans and security contractors who were detained in Haiti on weapons charges has been brought back to the United States and arrested upon landing. 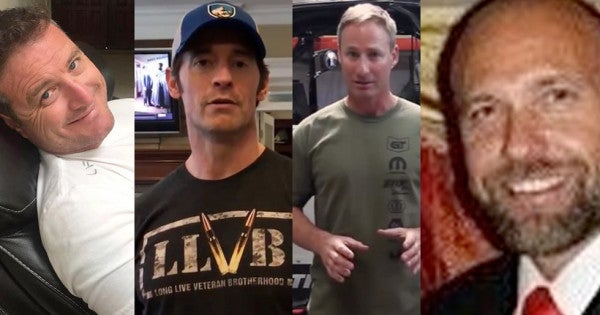 A group comprised of former U.S. military veterans and security contractors who were detained in Haiti on weapons charges has been brought back to the United States and arrested upon landing, The Miami-Herald reported.

The men — five Americans, two Serbs, and one Haitian — were stopped at a Port-au-Prince police checkpoint on Sunday while riding in two vehicles without license plates, according to police. When questioned, the heavily-armed men allegedly told police they were on a “government mission” before being taken into custody.

Just days after their arrest, however, seven of the eight men were released from custody in Haiti before they were scheduled to show up to their first court appearance. They were whisked away to the United States on an American Airlines flight to Miami on Wednesday, where they were arrested upon landing, according to The Herald.

“The return of the individuals to the U.S. was coordinated with the Haitian authorities,” a State Department spokesperson told Task & Purpose. The spokesperson declined to answer when asked if they were operating on a U.S. government contract in Haiti.

Video taken by a Twitter user named HaitiInfoProject showed the men being escorted by U.S. embassy personnel through the airport in Haiti; another video showed them as they exited the flight with law enforcement back in Miami.

Three others were identified as Vlade Jankvic, 41, and Danilo Bajagic, 37, both Serbian nationals; and Michael Estera, 39, a Haitian citizen (Estera was the only man who was not allowed to leave Haiti, according to The Herald).

Although video shows them being escorted off the plane by law enforcement, it wasn't clear which agency arrested them or whether they had been charged with a crime.

A spokesman for the Miami Police Department told Task & Purpose he had no records of an arrest; a spokesman for Miami Dade County Police — which has jurisdiction over the airport — similarly could not find any records on the men in his system, though he said it was possible the county police escorted them off the plane and turned them over to the FBI — which would not result in a police report.

“FBI is not involved,” said James Marshall, a spokesman for the FBI field office in Miami. “You may want to check with the local police.”

Task & Purpose inquired with the U.S. Marshals Service about which agency directed the men to be escorted off the plane, but a spokesperson was not immediately made available.

What the men were actually doing in Haiti or who they were potentially working also remains unclear.

Among the weapons they were allegedly carrying that were seized in Port-au-Prince, according to photos taken by police, were five AR-15 rifles outfitted with flashlights and red-dot optics. Another AR-style rifle had a bipod, long-range scope, and looked like it was chambered in the higher caliber 7.62mm round. Five of the pistols were made by Glock, three of which bore numbers on the slides, according to one photo, a common way to mark and track weapons inside of armories. A sixth pistol seemed to be a Bersa-made TPR-series pistol.

Backgrounds on the men scoured from public records and open-source information shows a range of military, law enforcement, and contracting experience. Chris Osman and Christopher McKinley both previously served as Navy SEALs and were currently running their own private businesses. McKinley previously worked as contractor for Blackwater USA as a physician assistant in Afghanistan, Iraq, and North Africa, according to his LinkedIn profile and personal website.

Kent Kroeker, who runs a company called Kroeker Off Road Engineering that specializes in truck suspension systems, is a former Marine Corps pilot with more than 20 years of service, according to a video interview with Red Bull. He's also a partner and chief operations officer with Kroeker Partners, where an about page says that “Kent served as a pilot and participated in ground operations in various capacities including Aircraft Commander, Forward Air Controller, Operations Officer, Anti-Terrorism/Force Protection Officer and Foreign Area Officer, eventually attaining the rank of Major before moving to the private sector.”

The firm said it had “no active engagements underway in Haiti” in a message on top of its website on Thursday.

On his Linkedin profile, Talon Burton is listed as the director of high threat protection for Hawkstorm Global, LLC, a company that provides “elite services ranging from Emergency Response and Asset Protection to Security Consulting and Hostage Rescue,” according to its website. A phone message left with the company by Task & Purpose was not immediately returned. Burton previously served as an Army military policeman during Operation Desert Storm and later on a personal security detail with the State Department, according to his Linkedin profile.

It wasn't clear whether Dustin Porte had any military or law enforcement experience. Public records show he has been involved in a number of businesses registered in Louisiana, including Carrolton Services, LLC and Patriot Group Services, LLC. Phone messages left by Task & Purpose with both companies were not returned. A message left for Paul Lea, an attorney and registered agent for Patriot Group, was also not returned.

Danilo Bajagic is currently employed as a contractor with a firm called K17 Security, headquartered in Rockville, Maryland, a company spokesperson told Task & Purpose on Wednesday. The spokesperson said the firm engages in consulting, training, and physical security but said, “this not a K17 operation” in Haiti. “We do not do international work such as this.” Bajagic has been with the company for nearly seven years, according to his LinkedIn profile.