Lawmakers are calling for Medal of Honor recipients and prisoners of war to receive "full military honors" at Arlington National Cemetery.  It turns out the cemetery has already made some of those changes. 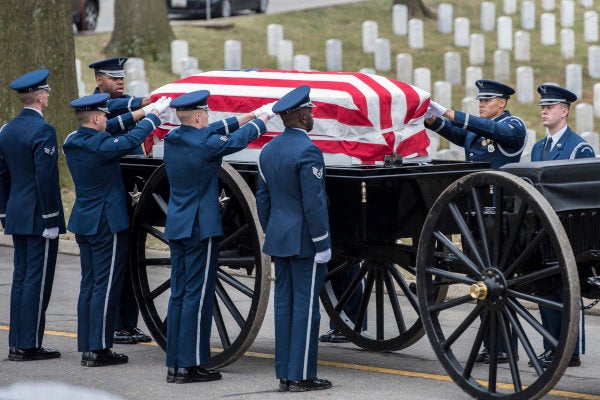 Arlington National Cemetery is the final resting place for more than 400,000 service members, veterans and their families. The hallowed ground is a symbol of national service, and a shrine to the sacrifices made by those in uniform.

In recent years, there's been a growing push to see a change in what funeral honors are rendered for some of the country's most distinguished heroes: Medal of Honor recipients and prisoners of war. As it turns out, the cemetery has already made some of those changes.

Earlier this week, lawmakers from both parties introduced legislation in the House and Senate to ensure that Medal of Honor recipients and prisoners of war receive full military honors at Arlington National Cemetery, Stars and Stripes reports.

“Full military honors ceremonies remind us of the service and valor demonstrated by those who have defended, protected, and sacrificed for freedom and democracy,” Rep. Jimmy Panetta (D-Calif.) said in a statement. A Navy veteran himself, Panetta introduced the legislation in the House on Feb. 6.

“This is a simple, but necessary fix that provides these selfless veterans with the honors they deserve,” Rep. Dan Crenshaw (R-Texas), a Navy SEAL veteran who co-sponsored the House bill, told Task & Purpose via email.

In the case of Medal of Honor recipients, Arlington National Cemetery currently offers “full military honors,” though it's a relatively new development, having gone into effect on Jan. 11, 2019. The cemetery's official website was updated “within the last seven to ten days,” to reflect the change, Barbara Lewandrowski, the director of public affairs at Arlington National Cemetery told Task & Purpose on Thursday.

Every veteran interned at Arlington can receive military funeral honors which include a casket team, a firing party, a bugler, and the folding of and presentation of the American flag. Roughly 17 active duty service members are mobilized for the detail and provide services for as many as 22 funerals a day.

Funeral honors with an escort — what's typically referred to as “full military honors” and what lawmakers are calling for in the case of Medal of Honor recipients and POWs — involves all the same elements as the above, in addition to an escort, a military band, and the option of a horse-drawn caisson, or carriage. The detail involves as many as 70 personnel, and due to the manpower requirements, can only be performed eight times a day. Previously, those honors were reserved for senior enlisted (E-9), chief warrant officers (CW-4, CW-5) field grade officers (O-4) and above, and any service member, regardless of rank, who was killed in action.

Now, Medal of Honor recipients are eligible for those full honors.

The change purportedly came at the behest of Army Secretary Mark Esper, following recommendations from Arlington National Cemetery's advisory committee on how best to reduce wait times — which can range from two weeks to a month for military funeral honors, or eight to nine months for funeral honors with an escort.

“Secretary of the Army [Mark Esper] said 'if we're going to make a modification to who receives honors, one of the modifications I recommend, is that Medal of Honor recipients will receive full honors with escort,'” Lewandroski said of a report from Arlington's advisory committee submitted in July 2018.

A spokesman for the Secretary of the Army did not immediately respond to a request for comment.

The policy change seems to have been quietly put in place. Given that it was changed with little fanfare, it makes sense that a pair of bills are calling for something that's already been done, at least partially.

“Today, we are providing military funeral honors with military funeral escort to Medal of Honor recipients,” Army Maj. Shannon Way, a strategic planner at Arlington, told Task & Purpose. Speaking of the Full Military Honors Act of 2019, Way said “this is something that has been out there before, from the standpoint of legislation, and it doesn't surprise me that it still looks like it did, say, six months to a year ago.”

In fact, the most recent bills are similar to last year's attempt to do the same thing, notes Stars and Stripes.

The recent change for Medal of Honor recipients may make the proposed bills a little redundant, though if they pass, the policy would become permanent, and prisoners of war would be eligible for full military honors.

As well-meaning as that may be, it could bring additional challenges.

Under the cemetery's current policy, prisoners of war could expect to wait two weeks to a month for military funeral honors — which include a firing party, bugler, casket team, and flag presentation, Lewandrowski said. “Now, if POWs got put into the full honors with escort queue and we only do eight of those a day, because we don't have the resources to do any more than eight a day, those POWs could wait eight or nine months to be buried, and that would be short.”

The delay, and the impact it could have on families, is one of the reasons Arlington has held off on changing the policy for prisoners of war.

“That also was part of that decision in order for that large number of prisoners of war to be buried and for families to come to closure,” Lewandrowski said. “That was another reason they chose not to have POWs in that longer waiting queue.”

Update:This story was updated to include additional information from Arlington National Cemetery on when the policy was changed to provide “full military honors” to Medal of Honor recipients.