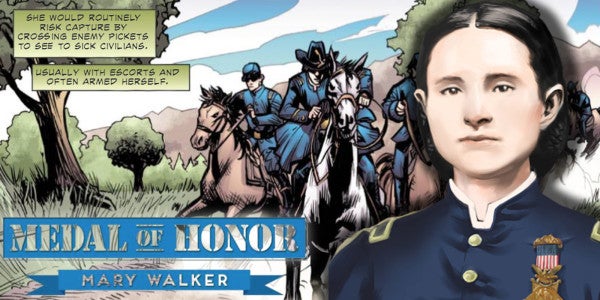 One of the first women to earn a medical degree in the United States and the only to ever be awarded the Medal of Honor is now the star of her own graphic novel.

During the Civil War, Dr. Mary Edwards Walker served as a contract surgeon for the Union Army — no small feat at the time, but just one in a long list of trailblazing accomplishments credited to Walker, who would routinely cross into enemy territory, often armed and with an escort, to treat ill and wounded civilians regardless of the flag under which they lived.

The seventh issue in the Associated of the U.S. Army's MoH series, the graphic novel chronicles Walker's adolescence growing up in a small town in upstate New York, where she challenged social norms early on, insisting she be allowed to work the family farm alongside her brothers — a trend she continued at college where she was suspended after refusing to resign from the all-male debate team.

The story follows her to the early days of her medical practice, and finally, her war-time service treating the wounded at field hospitals, first as a contract surgeon and later as a credentialed U.S. War Department surgeon — a paid position that was the equivalent of a lieutenant or captain's rank.

The graphic novel also covers Walker's capture by Confederate troops in 1864, which led to her being held prisoner for four months before being exchanged in a prisoner swap for a Confederate surgeon.

Walker's MoH was not without controversy: In 1916, the War Department began a review of past awards that, with the stated intention of correcting decades of abuse, saw the department attempt to strip Walker of her award.

Walker refused to turn in her medal, wearing it until her death in 1919 at the age of 87. Decades later, in 1977, President Jimmy Carter restored Walker's medal, which now sits on display in the Pentagon.

Following the release of the graphic novel, the AUSA will be publishing one more issue as part of its second volume, this time on Tibor Rubin, a Holocaust survivor who emigrated to America and later fought in the Korean War.

The entirety of Mary Walker's Medal of Honor graphic novel can be read below or on AUSA's website.

RELATED: The heroism of Medal of Honor recipients Audie Murphy and Sal Giunta get the comic book treatment