Rafael Peralta may not have received the Medal of Honor, but the original award request remains a detailed account of one Marine's sacrifice all those years ago in Fallujah, Iraq. 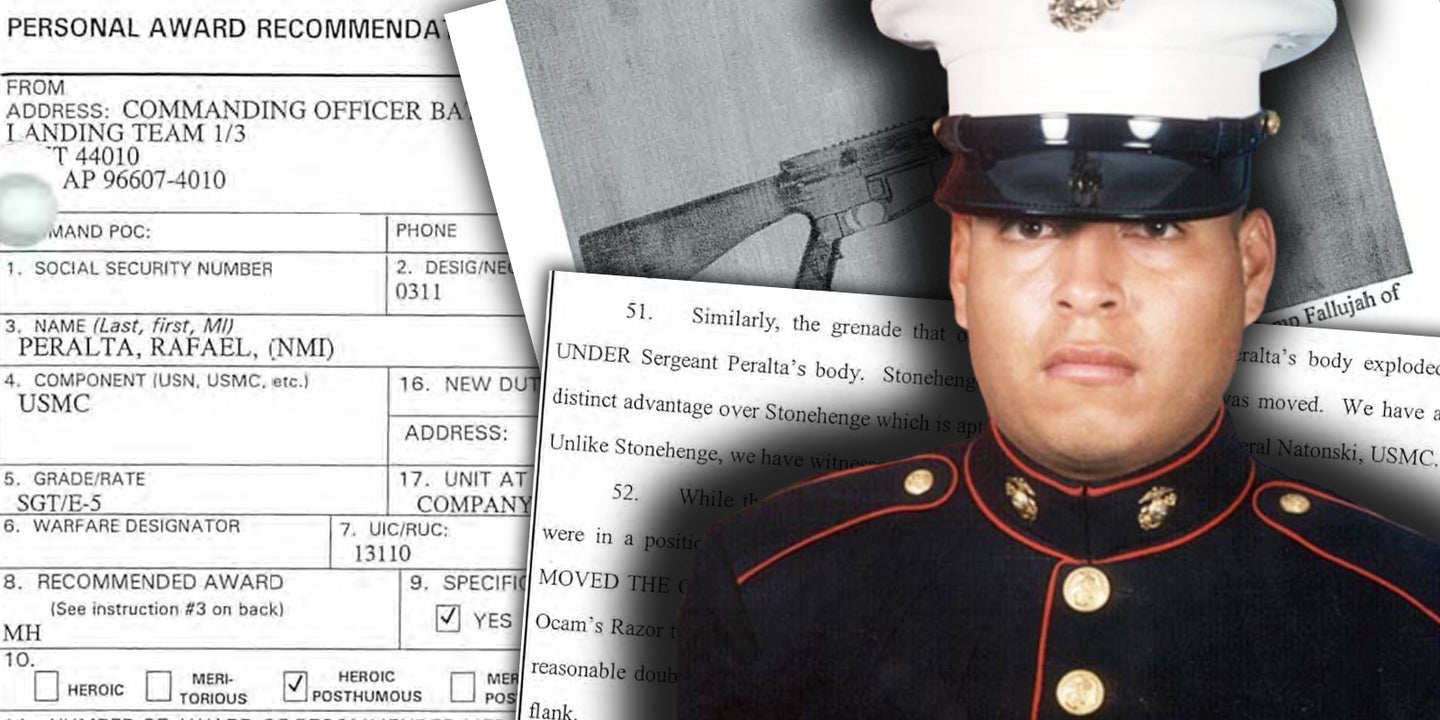 Like many who enlisted in the late 2000s, I first heard of Sgt. Rafael Peralta during Marine Corps boot camp, uttered in the same reverent tone as the names John Basilone and Jason Dunham.

His was a story of sacrifice and selfless service. An immigrant from Mexico, Peralta had enlisted in the Marine Corps the very same day he received his green card.

And on Nov. 15, 2004, as a young infantryman with 1st Battalion, 3rd Marines, he was taking part in the Second Battle of Fallujah — the deadliest urban combat U.S. troops had faced since the Vietnam War. Peralta had volunteered the night before to stand post so his Marines could rest, after they had spent the previous three days engaged in street-to-street fighting. He was leading an undermanned squad as they made their way to another house — the seventh that day.

As the Marines entered, they were ambushed by insurgents lying in wait, and Peralta was shot in the head. As he lay on the floor, dying, an enemy fighter threw a grenade, and with his last breath, Peralta pulled the explosive under his body, absorbing the blast and saving his fellow Marines.

This is the story I learned at Marine Corps Recruit Depot San Diego, and it’s the same one told in the citation for Peralta’s Navy Cross, which he was posthumously awarded after attempts to see him bestowed the Medal of Honor failed.

However, the closer Peralta came to receiving the nation’s highest award for valor, the more muddled that narrative became.

RELATED: The story behind a fallen Marine and the warship the Navy named after him

The 326-page file contains witness statements, photos, templates, maps, coroner’s findings, and narratives providing a detailed look at what happened that day, and what each level of the military’s bureaucratic awards process saw as they slowly moved his award recommendation up the chain before it was ultimately downgraded to the Navy Cross.

The reason for the downgrade revolves around the findings of a panel of experts and physicians who concluded that after being shot in the head, Peralta could not have been cognizant enough to deliberately pull the grenade under his body. Marine Corps officials later said that Peralta may have been shot by friendly fire during the engagement, and some members of his squad went on to say that they may have embellished his final moments.

And therein lies the contradiction that’s harried the story of Peralta’s sacrifice. The Pentagon saw fit not to award him the Medal of Honor because it determined he could not have deliberately pulled the grenade under his body; however, he was awarded the country’s second highest commendation for bravery for doing precisely that.

After the initial exchange of gunfire, the insurgents broke contact, throwing a fragmentation grenade as they fled the building. The grenade came to rest near Sergeant Peralta’s head. Without hesitation and with complete disregard for his own personal safety, Sergeant Peralta reached out and pulled the grenade to his body, absorbing the brunt of the blast and shielding fellow Marines only feet away.

As Task & Purpose Editor in Chief Paul Szoldra wrote back in 2014, you can’t have it both ways: Either Peralta “was shot but was still able to pull that grenade into his body and became an incredible hero to four Marines in 2004. Or he was shot and accidentally fell on a grenade, and four Marines just miraculously survived.”

As for the original Medal of Honor recommendation, in the executive summary, the author — whose name and title are redacted — goes to great lengths to argue that Peralta likely pulled the grenade under his body:

As I can fully appreciate the value of medical opinions as to what a wounded person was or was not capable of doing under a given set of circumstances. I am also somewhat familiar with the legal evidentiary standard in this area. Since a medical expert can rarely if ever, render an opinion to a “mathematical certainty,” the law requires the opinion be given to a medical certainty. “Medical certainty” is a synonym for “probability.”

In the case at hand, we have four physicians of excellent pedigree who state to a medical certainty that Sergeant Peralta was medically capable of placing the grenade under himself. We also have a physician of excellent pedigree who disagrees. While the weight of such testimony is heavily in our favor, I view this mental exercise akin to Stonehenge.

While there can be no doubt that the grenade was moved, all the witnesses who were in a position to observe so unanimously state IT WAS SERGEANT PERALTA WHO MOVED THE GRENADE. Newton’s first law of motion tells us “every action has a reaction.” Ocam’s Razor tells us “the simplest explanation is usually the explanation.’ Therefore, I have no reasonable doubt and state with certainty that Sergeant Peralta moved the grenade under his left flank.

In the end, and in spite of the arguments, witness statements, and campaigns to see Peralta awarded the Medal of Honor, his mother accepted her son’s Navy Cross during a ceremony at Marine Corps Base Camp Pendleton, California, on June 8, 2015.

Like other Marine heroes, Peralta’s name lives on. It adorns the USS Rafael Peralta; it’s emblazoned above the doors of the command deck for the 31st Marine Expeditionary Unit; and his shredded flak jacket and battered rifle are held by the service in anticipation of its future display at the Marine Corps Museum in Quantico, Virginia.

And despite how his story has changed since I first heard it all those years ago at boot camp, Peralta’s legacy remains one of selfless sacrifice.

Regardless of the findings of the review boards, panelists, or experts, that for years went back and forth, dissecting each moment and debating the worthiness of Peralta’s actions, there’s one indisputable fact: A Marine laid down his life that day, and as a direct result, four others lived.

That alone makes Sgt. Rafael Peralta a hero, and the events of that day worth reading about: