Sgt. Rafael Peralta was one of the first Marine Corps heroes of the Global War on Terror that most Marines... 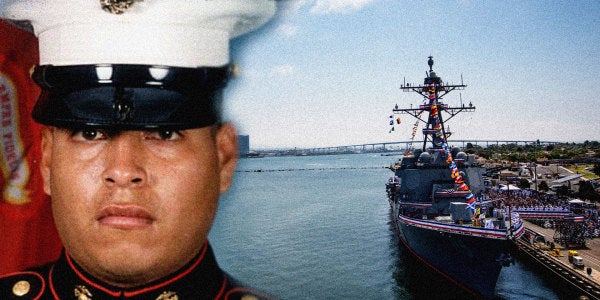 Sgt. Rafael Peralta was one of the first Marine Corps heroes of the Global War on Terror that most Marines had heard of. When I cycled through boot camp in 2008, his name was uttered along with a host of legendary Marines like Smedley Butler and Chesty Puller. Peralta’s battered rifle and body armor are part of an upcoming display at the Marine Corps Museum, and his story of sacrifice is often regarded as a testament to what it means to be a Marine. In the years since, it’s come to light that the story we were told in recruit training may not have been entirely true.

Peralta, a young infantryman with 1st Battalion, 3rd Marines, was clearing a house with his squad during the Second Battle of Fallujah in Iraq on Nov. 15, 2004, when he was shot in the head. As he lay dying, an enemy fighter threw a grenade. With his last breath, Peralta pulled the explosive under his body and absorbed the blast, saving his fellow Marines.

Last weekend, almost 14 years after his death, the Navy commissioned the USS Rafael Peralta, an Arleigh Burke-class guided missile destroyer, amid lingering questions about the final moments of the warship’s namesake. Here’s everything you need to know about Peralta and the controversy surrounding his sacrifice.

When Peralta was killed he was clearing the seventh house of the day, after volunteering to go out with an undermanned squad. The Marines entered the house with Peralta on point. They immediately took fire from insurgents lying in wait, and that’s when Peralta was shot; subsequent investigations found that he was likely hit by friendly fire.

An enemy fighter then threw a grenade, which landed near the fatally wounded Peralta — who pulled the explosive to his body and absorbed the blast. That account was corroborated by five Marines who claimed they saw Peralta pull the grenade to his body; another Marine said he saw Peralta reach for the explosive.

But over time, the story began to change.

Not long after Peralta’s death, an April 2005 medical examiner’s report stated that Peralta’s head wound would have been “immediately incapacitating and nearly instantly fatal. He (Peralta) could not have executed any meaningful motions,” according to a June 2014, Stars and Stripes report. In other words, the sergeant would have been physically unable to pull the grenade under his body of his own volition.

Photo courtesy of the National Museum of the Marine Corps

Then-Secretary of Defense Robert Gates approved Peralta for the Medal of Honor in 2008. But due to concerns raised by the medical examiner’s report, Gates assembled a panel to determine if the nation’s highest award for valor was appropriate in Peralta’s case.

Ultimately, each member of the panel — a retired general, a Medal of Honor recipient, two pathologists and a neurosurgeon, according to Foxtrot Alpha — concluded that Peralta would have been unable to pull the grenade under his body.

Following the panel’s decision, Gates instead recommended posthumously awarding Peralta the Navy Cross. The award was presented to Peralta’s mother — who, after refusing to accept the service’s second-highest award for valor for years, received the medal on June 8, 2015.

Repeated attempts have been made to upgrade Peralta’s Navy Cross. Rep. Duncan Hunter of California, a former Marine, lobbied successive defense secretaries to no avail. In February, Hunter announced that he would bring the matter up to the new secretary of defense, retired Marine Gen. James Mattis.

However, the citation for Peralta’s Navy Cross raises its own questions, which Foxtrot Alpha pointed out in a July 30 report:

“Did you catch that? “Without hesitation and with complete disregard for his own personal safety, Sergeant Peralta reached out and pulled the grenade to his body, absorbing the brunt of the blast and shielding fellow Marines only feet away.” So how could the Navy Cross citation read this way if it had been decided by the independent team of experts that Peralta could not have done this as his injuries were too severe to make a conscious decision?”

A Washington Post report further complicated the story in 2014. Two Marines who were with Peralta in the house when he died told the paper that their account of the sergeant’s heroism was a fabrication, made up on the spot amid concerns that Peralta was hit by friendly fire.

“I can remember people saying it would be the right thing to do, to say that he did more than he did,” infantryman Reggie Brown told the Post. The other Marine, Davi Allen, was wounded in the grenade blast; he told the Post that he watched the explosive detonate near Peralta, not underneath him.

“It has always bugged me,” Allen said. “I knew it’s not the truth. But who wants to be the one to tell a family: ‘Your son was not a hero’?”

On July 29, the Navy commissioned the USS Rafael Peralta at Naval Air Station North Island in San Diego. The commandant of the Marine Corps, Gen. Robert Neller spoke to the crowd about Peralta’s legacy — a young man who immigrated to the United States as a teenager, then enlisted to serve his adopted country on the day he got his green card.

“This is more than just another commissioning. It marks the commemoration of a life and the immortality of a hero,” Neller said. “Sgt. Peralta's legacy will forever be part of this ship. All he ever wanted to be was an American, to serve his country.”

The decision to present Peralta with the Navy Cross rather than the Medal of Honor remains mired in controversy, and the details of his death are muddied by conflicting reports and testimony, further convoluted by differing conclusions from physicians and experts.

What is undeniable is that the legend surrounding Rafael Peralta, one of sacrifice and courage, continues to inspire sailors and Marines to this day.