Untold Stories Of The Harlem Hellfighters Of World War I

This year marks the centennial of the United States’ entrance into World War I — a conflict that claimed millions... 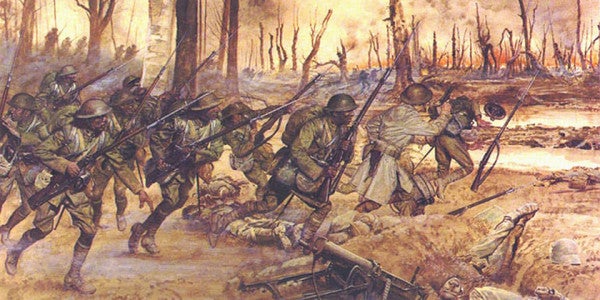 This year marks the centennial of the United States’ entrance into World War I — a conflict that claimed millions of lives, redrew the world map, and changed war forever. Countless stories of heroism and hardship emerged from the fight in Western Europe, and many of them involve the 369th Infantry Regiment.

The first black American infantry regiment to fight in World War I, the 369th spent more time in the trenches and under fire — 191 days — than any other U.S. unit. A National Guard regiment, the 369th recruited out of New York City in large numbers, and German soldiers who witnessed their battlefield prowess quickly dubbed them the Harlem Hellfighters.

Members of the 369th who were awarded the Croix de Guerre for gallantry.

Though their actions didn’t immediately alter the fight for equal rights at home, the regiment’s wartime service heightened a sense that sending African-Americans to fight for democracy abroad — while racial segregation and inequality went unchecked at home — smacked of hypocrisy.

Here are five stories of bravado and courage from the 369th — the first U.S. regiment to cross into Germany over the Rhine River, and one of the most decorated American units of the war.

1. Even the Harlem Hellfighters’ rifles were segregated.

The French certainly did love these long sticks for holding their bayonets.

By the time the United States joined the war, its allies were in desperate need of reinforcement. The men of the 369th were sent to assist the French Army’s 16th Division on the Western Front in spring 1918. It was a strategic necessity — the Western Front desperately needed reinforcement — but it was also motivated by racial bias: Many white American soldiers refused to fight alongside their black counterparts.

The decision to hand off command of the 369th to the French started with some small-arms complications. After the regiment’s limited combat training stateside, they were issued Springfield rifles, which they had to give back after being assigned to the French, along with “almost every bit of American gear” they had — including helmets, Army greens, and food rations, according to author Stephen L. Harris’ book, “Harlem’s Hell Fighters.”

In place of their Springfields, the 369th received the French Lebel rifle — which had a reputation for reliability, but was temperamental and annoying to load. Some members of the regiment, like Capt. Hamilton Fish, saw the exchange as a bit of a disappointment.

“Their Lebels were nowhere near as good as our Springfields,” Fish said in Harris’ account. “The French, you see, were great believers in the hand grenade — their rifles seemed more or less something to put a bayonet on.”

2. That’s okay: The Hellfighters had “Black Death” and bolo knives.

Turns out the Marines don’t have a copyright on stabby stares.

While standing watch in the Argonne Forest in May 1918, two 369th soldiers, Pvt. Henry Johnson and Pvt. Needham Roberts, were attacked by a 12-man German raiding party. Outnumbered and under fire, the two men fought off the initial attack, but after Roberts was badly wounded. Johnson remained with the injured soldier to keep him from being taken prisoner by the Germans.

Wounded, advancing on the enemy with only a bolo knife, Johnson killed one German soldier by stabbing him in the head and forced the survivors to retreat. Johnson’s actions earned him national acclaim, as well as the incredibly metal nickname “Black Death.” (Eat your heart out, “Bear Jew.”)

Johnson and Roberts were among the first Americans to be presented the Croix de Guerre for valor by the French military. And in 2015, Johnson became the second African-American to receive the Medal of Honor for actions during World War I, presented by President Barack Obama during a posthumous award ceremony at the White House.

3. When not kicking ass in the Marne, be-bopping Hellfighters helped bring jazz to Europe.

Don’t make them kill you with those clarinets.

Among the Hellfighters’ many distinguished members was James Reese Europe, a renowned ragtime and jazz musician who served as both an infantry officer and the regiment’s bandleader.

Europe had a hard time finding enough trained recruits to play in the regimental band in New York, so he traveled to Puerto Rico and enlisted more than a dozen black instrumentalists from the island to round out his band, according to the New York Folklore Society. “The band, which recruited up to a third of their members from Puerto Rico, introduced European audiences, particularly in France, to live jazz music and influenced the careers of notable musicians” on both sides of the Atlantic, according to the Society.

Musicians like Europe continued to play while serving abroad, touring thousands of miles to perform, according to Rod Paschall, director of the U.S. Army’s Military History Institute. This exposure to a deeply American style of music — jazz — had a profound and lasting impact in France. It also produced a corps of Latin and black musicians who found themselves in demand in New York after their service.

“While concrete proof is impossible to produce in these sorts of social movements,” Paschall writes. “It is likely that the regiment’s band performances in 1917 and 1918 had much to do with creating or accelerating the French tastes for American jazz — a phenomenon that has persisted until this day.”

4. To fight alongside the French, they had to learn to fight like the French: badass.

Because nothing says ancient warfare meets modern combat like a grenade-chucking catapult.

By the time the 369th made its way into the trenches, each member of the regiment was paired off with a French counterpart — a stab at forced harmony that would have been unthinkable in the American military at the time. The pairs then trained intensely for three weeks, near the front and amid sporadic attacks by German aircraft and artillery.

The Hellfighters quickly learned the tricks of trench warfare from their French counterparts, according to author Peter N. Nelson’s “A More Unbending Battle: The Harlem Hellfighters’ Struggle for Freedom in WWI and Equality at Home.”

Those tricks included cutting off the tails of their overcoats so they wouldn’t get weighed down with mud and water; carving grooves in the mud wall with shovels to make it easier to climb out of the trenches; or curling up balls of barbed wire during the day, so that at night they could be carried with ease and then quickly unfurled to reinforce the defenses.

Knowing when to take cover, or when to be wary of a gas attack — i.e., when the wind was blowing toward your lines — all had to become second nature for the men who survived half a year in the trenches.

5. Even in death, the Hellfighters made French friends for life.

They were still damn glad to get back home to New York, though.

Many of the U.S.-French pairs of soldiers ended up cementing permanent bonds. George Cuffee, a young soldier in the 369th, became close to his French counterpart, Ruby Garnett, who taught him to speak French — a fact that Cuffee’s wife, kids, and grandkids were unaware of for decades, until one night, when they caught him parlez-ing Français in his sleep.

When asked why he never spoke French around his family before, his sardonic reply was: “None of you all speak French, why should I waste time talking it to you?” Cuffee’s great nephew, Glenn Jones, told Task & Purpose.

One night in the days before the Meuse-Argonne Offensive — a massive battle that stretched along the Western Front, and lasted 47 days, ending on Armistice Day — Garnett took Cuffee’s place on watch. Tragically, Garnett was killed in an unexpected attack, and his death stayed with Cuffee for years.

“They were buddies, so they’d be together all the time in the trenches,” Jones said. Cuffee “vowed to name his first child” after Garnett — and he did, naming his eldest daughter Ruby Garnett after his fallen friend.

If they hadn’t traded watches, Cuffee’s great nephew said, “he felt it would have been him and not Ruby.”