Why The Wild Men Of No Man’s Land Endure, 100 Years Later

During World War I, beyond the wire and away from the confines of the trenches lived the wild men of... 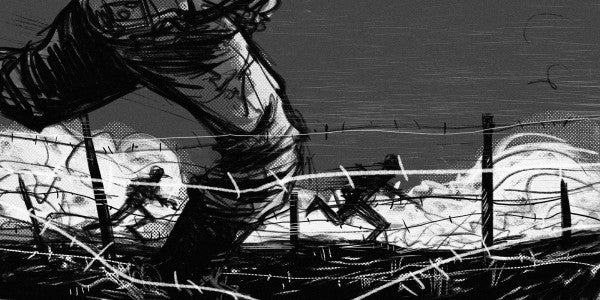 During World War I, beyond the wire and away from the confines of the trenches lived the wild men of No Man’s Land. These soldiers — stragglers from seven armies that clashed on the battlefields of Europe — came together as a band of deserters to make a home in the desolate space between their warring countrymen, slipping into abandoned trenches to scavenge for loot and food to stay alive. In the first global war, they became soldiers with no nation.

The most gruesome accounts of the so-called wild men suggest they were flesh-eating savages, while modern evocations say they might have renounced the title of soldier altogether to simply become “human beings caring for one another, no matter what uniform they were wearing.” In that literal and metaphorical space of No Man’s Land, legends of nicety and ghoulishness were born, and while some are rooted in history, others are pure fiction.

Since the war ended, military raconteurs have told many a version of this story through historical fiction, begging questions about where this tale originated and if there is any truth to it. Unlike the legendary Christmas truce of 1914, where English, French, and German troops laid down their arms for caroling and friendly soccer matches in the spirit of the season, the wild men who inhabited No Man’s Land during World War I are mere historical fiction.

According to folklorist and Smithsonian curator James Deutsch, Ardern Arthur Hulme Beaman, a lieutenant colonel in the British cavalry who penned “The Squadroon” in 1920, swore the wild men were real, comprised of “British, French, Australian, German deserters, who lived there underground, like ghouls among the mouldering dead, and who came out at nights to plunder and to kill.”

Beaman continues, “In the night, an officer told him, mingled with the snarling of carrion dogs, they often heard inhuman cries and rifle shots coming from that awful wilderness as though the bestial denizens were fighting among themselves.”

But in 1975, historian Paul Fussell deemed the tale of the wild men instead the “finest legend of the war, the most brilliant in literary invention and execution as well as the richest in symbolic suggestion.” Deutsch has been trying for years to uncover the tale’s origins, but hasn’t been able to find any reference earlier than Beaman’s.

But that’s both the beauty and the tragedy of legends: they make some of the best stories but have no roots in history, their staying power is rooted in the sense that even without concrete proof, they’re still believable.

“The thing about legends is that they’re plausible enough,” Deutsch told Task & Purpose. “They could have happened.”

Deutsch suggests that if the story of the wild men of No Man’s Land had circulated during the war, it may have been a cautionary tale for deserters. “Don’t go out into No Man’s Land, because you may be pulled down by those ghoulish scavengers, who will devour you,” he said. “It just conveys the horror of war. World War I was a turning point in combat. Never before was human life destroyed on such a massive scale.”

As for the ghoulish sounds that legends says came from the wild men, it may have been imagined, or it may have been those left behind, dying in abandoned trenches. It’s important, Deutsch added, to look beyond the text of the stories, but at the deeper meaning. “They’re not idle or trivial, which is why they endure.”

“It was horrifying,” Deutsch said. “Out of that horrifying experience comes this horrifying legend. It really conveys the madness, the chaos, the senseless horror, which is true of all legends.”

During World War I, thousands died unidentified in trenches across Europe. They may have fallen victim to the Great War, but they were resurrected in legend as the wild men of No Man’s Land, where they will remain, so long as we continue to pass on the story.