Now You Can Fight Weird Hellbeasts In WWI Trenches, Because Video Games

The Great War was a nightmare. Bodies littered across no-man’s land, clouds of noxious gas; millions maimed or killed by... 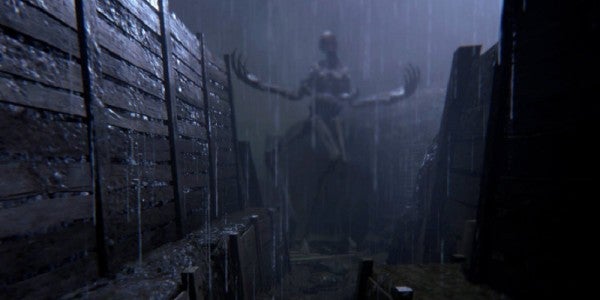 The Great War was a nightmare. Bodies littered across no-man’s land, clouds of noxious gas; millions maimed or killed by bullets, bayonets, and artillery. To serve in the trenches of World War I was to live in perpetual fear.

“Ad Infinitum,” a new PC game by German indie developer StrixLab, has found the one way to make that fight more terrifying… by pitting a lone soldier against terrifying hellspawn.

A horror survival game set along the front — maybe the Western Front; it’s unclear, one of the game’s many mysteries — the only way to survive “Ad Infinitum” is to run and hide.

The game is in development with a pre-alpha demo expected sometime this year. The developers haven’t revealed the storyline and are pretty hush-hush about everything, from the central character’s identity to what service he’s with and where the game takes place. It’s unclear whether the main character’s demons are literal hellspawn, or figments of his shattered mind.

This could be the first horror game of its kind — one where the real enemy isn’t a monster or some horrid creature, but psychosis brought on by the trauma and terror of war.

I don’t have a clue what’s going to happen in “Ad Infinitum,” but I’ll tell you one thing: When it finally gets released, there’s no frigging way I’m playing it in the dark.