I was busily pouring over maps and operations orders in my Bravo Company command post. Actually, I was probably trying... 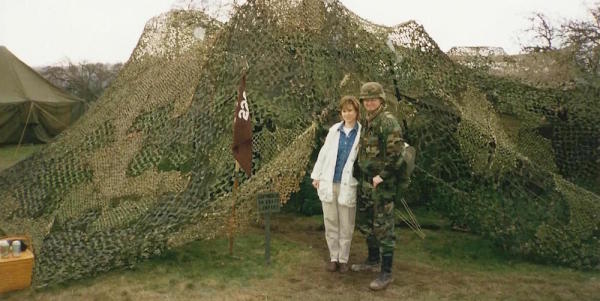 I was busily pouring over maps and operations orders in my Bravo Company command post. Actually, I was probably trying to catch up on my quarterly training brief slides and earn a coveted PowerPoint Ranger slot on the U.S. Army, Europe team. Anyway, one of my soldiers, caked in sweat and dirt, tore into the tent and announced with perplexed terror, “Sir, you’re not going to believe this, but your wife just busted through the perimeter!” Visions of our Honda Accord tearing through the German countryside in a berserk cyclone of dirt and grass were met with the sound of my wife screaming in her pronounced Southern accent, “Woody, your first sergeant just pulled a gun on me! Hey, you’re not going to shoot that thang, are you? It’s not loaded is it?”

Allow me to back up…

Before leaving home earlier that week, I awoke Lori and kissed her goodbye. I jokingly asked if she was coming to see me in the field. She responded with a very quick “heck no” and drifted back into slumber. Hours later when the rosy fingers of dawn spread across our quaint little German village, my wife felt a tinge of guilt upon the realization that I may have felt slighted. She telephoned our friend, the Alpha Company commander, to find the whereabouts of my company field training exercise. Lori asked whether she thought it would be prudent to visit the field site. The purported reply was something similar to “Of course. He asked if you were going to visit. It must be all right!”(And you thought stealing guidons was a childish prank.) Lori graciously purchased several bags of candy for the soldiers, and began the long journey toward the company’s little home-away-from-home.

Inside my command post, the scene began to unravel as my wife explained what happened. My queen painted the picture of a leisurely drive with birds singing, crickets chirping, and wide-eyed happy soldiers feverishly waving at her as the tents came into view. Lori exited her car with candy in hand and heard a booming voice telling “the forklift driver” to halt. It was really nice that the troops were stopping all their work to welcome her, she thought. She progressed further into the perimeter on foot bravely dodging all the tangle foot of tent lines and stakes. All along the trek, she wondered why “the forklift driver” did not halt when the first sergeant told him to halt three times. That’s when it happened. That’s the exact moment my top noncommissioned officer pulled out his service pistol and took aim at my wife.

The NCO described the situation from a slightly different angle. According to his account, several soldiers sounded the alarm that someone was entering the company area at a high rate of speed. Several tried to wave her down in order to prevent the destruction of fighting positions they had tenderly created with such fervor and dedication. Upon exiting the vehicle this unknown civilian was attempting to bring an indistinguishable satchel into the company area. He lamented how he unsuccessfully directed her to halt three times in the area next to a 4K forklift before reluctantly removing his sidearm from its holster. His final statement was a pleading, “Sir, I didn’t recognize her, I just didn’t recognize her.”

Well, we all made it through that day. That was a long time ago and my wife has not visited any field sites since. Following the after-action review, I gave the best picks of candy to my first sergeant. After all, the battalion commander never saw it and we had lots of candy.

Oh, the burden of command.

Scott C. Woodard is a retired U.S. Army Medical Service Corps officer who served from 1988-2013. Despite the events in this article, he’s still happily married since 1993 and is now serving as an Army historian.