Children Of Fallen Troops Come To DC To Heal And Play

On May 28, 500 children of fallen service members gathered in West Potomac Park in Washington, D.C., for Playfield in... 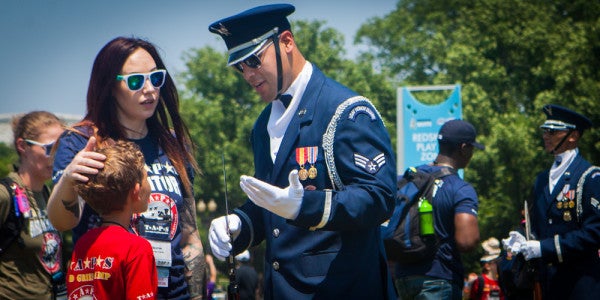 On May 28, 500 children of fallen service members gathered in West Potomac Park in Washington, D.C., for Playfield in the Park, an event put on by Yellow Ribbons United and the Tragedy Assistance Program for Survivors, or TAPS.

The day was part of TAPS’ annual National Good Grief Camp, which pairs children of fallen service members with military and veteran mentors over the course of Memorial Day weekend.

For 10-year-olds Landon and Tyler, the camp is an opportunity to create new memories and friendships with those who understand their grief and loss.

“I realized that fallen heroes, like I have, everyone here was just like me,” Landon told Task & Purpose. “Everybody here had a parent or a loved one from all the branches of the military who passed away in the line of duty.”

Yellow Ribbons United brings professional athletes and sports companies together to support American military families and was founded by Emma and Derrick Dockery, a former Washington Redskins football player. Founded in 1994, TAPS is a national organization that provides care and support to the families of fallen service members.

Landon and Tyler take turns kicking a soccer ball during Playfield in the Park, an event put on by Yellow Ribbons United and Tragedy Assistance Program for Survivors on May 28 in Washington, D.C.Task & Purpose photo by James Clark

For Tyler, he says the program has made it easier for him to talk about his father.

“My mom told me it was about grieving and I didn’t understand what grief was and she told me it was about being upset,” said Tyler. “I didn’t like talking about my dad, but TAPS showed me how to talk about it. I figured out that all the kids at TAPS went through the same thing.”

Many of the TAPS mentors currently serve on active duty, in the reserves, or are veterans themselves, and some, like Julie Carabell, knew the fallen parent of their mentee.

Carabell serves in the Air Force reserves and was friends with the father of her mentee who served in the Army.

Julie Carabell an Air Force reservist and a volunteer with Tragedy Assistance Program for Survivors, carries her mentee, Arayana on her back.Task & Purpose photo by James Clark

“I first joined TAPS because it was an opportunity to give back to the families, and later that year Aryana’s dad passed away and I had been stationed with him and her mom and two sisters,” said Carabell, who has began mentoring Aryana last year.

“I think it’s been a great opportunity, whereas we can never repay the debt, it’s been a really rewarding experience to try to keep that memory alive for them,” said Carabell.

Related: Memorial Day Doesn’t Need To Be Treated As A National Military Funeral »

During the event, the children had a chance to meet with veterans and service members who knew their parents, play field games and sports, get their faces painted, and celebrate the memory of loved ones who fell while serving their country.

Check out the photos from Yellow Ribbons United and TAPS’ Playfield in the Park below.

Good Grief Camp volunteers, children, and their military mentors are greeted with cheers and applause as they arrive at Playfield in the Park for a day of fun.

Army Lt. Gen. Bill Mayville, director of the Joint Staff at the Pentagon, talks with AJ and Jake about their dad, Air Force Lt. Col. Mark Stratton, who was killed in Afghanistan in 2009.

“I walk by their dad’s picture every day going back and forth through the office and I always wonder about his kids and how they’re doing and I got to meet his two sons today,” said Mayville. “It was really special to come to an event like this.”

Volunteers, mentors, and their mentees take to the stage to dance.

Children talk with actors dressed as Superman and Wonder Woman.