Why The Military Should Be Running In American Shoes

Anyone who’s deployed overseas knows that it’s easy to get sentimental about your hometown when you’ve been so far away... 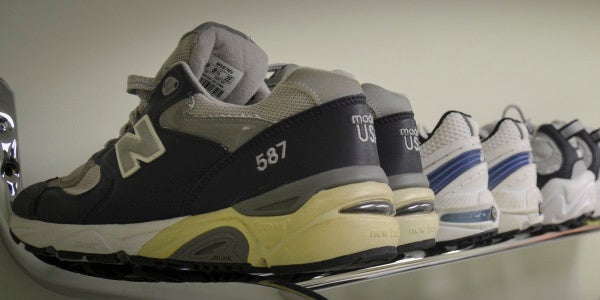 Anyone who’s deployed overseas knows that it’s easy to get sentimental about your hometown when you’ve been so far away for so long. Belleville, Illinois, where Army-issue Belleville boots are made, isn’t technically where I was born, but it’s close enough that during month 14 of an Iraq deployment I felt a very visceral connection to my home. It was as though the boots were binding me to my past, grounding me in it, and in a very real sense, providing me with strength and comfort.

The fact that Belleville has been providing boots to the military since 1917 is a financial boon for the people of Southern Illinois. Anyone with even a passing familiarity with the byzantine world of military acquisitions knows that it’s intimidatingly complicated and potentially a huge source of revenues for companies. That’s why there’s been a very muted ongoing battle being waged over the military running shoe. Simply put, the question is whether running shoes should be required to be made in America, even if it could potentially mean less choice for the individual service member.

To really understand this conundrum though, you have to know what the Berry Amendment is. As the Department of Commerce website explains it, the Berry Amendment requires the Department of Defense to only procure goods produced in the United States. It’s purpose is to maintain the “safety and security of our armed forces” by keeping production of vital material close to home. It also acts as a financial boon to certain industries, ensuring that they have a strong economic platform to develop from.

While that makes sense for much of the gear service members require to deploy, are tennis shoes necessary to go to war? Technically, they aren’t even part of the military uniform. But Democratic Rep. Niki Tsongas of Massachusetts and Republican Rep. Bruce Poliquin of Maine are co-sponsoring an amendment to the fiscal year 2017 defense budget that would lump running shoes in with the other DoD purchases that must conform to Berry Amendment “made-in-America” standards. That means that the DoD would issue them directly to soldiers rather than the current practice: providing a $75 allowance to purchase them.

The Congressional Budget Office claims that the switch from voucher to direct purchase would cost $50 million more than the cash allowance plan over a five-year period. And critics aren’t having it. One of the most outspoken opponents to the legislation is Rep. Mark Sanford of South Carolina who claims the section of the budget that deals with athletic shoes, known as Section 808, is basically a form of graft — using the highest legislative body to tailor regulations and pass laws in order to make scads of cash for prefered business leaders. As his spokesperson Scott Jeffery recently said, “Currently, all new Marine recruits get to pick their shoe of choice … but section 808 would whittle that choice down to one brand: New Balance.”

A lot of issues arise out of New Balance being the only serious contender at the table for a “big, sweet military contract,” as NPR put it back in April. The first being how they positioned themselves so advantageously. When the DoD started sending out feelers that it might be interested in issuing athletic shoes two years ago, New Balance quickly came up with a prototype that would appeal to the department. Of course, along with actual product comes the obligatory massive lobbying push that all companies engage in when competing for government money. Since 2013, New Balance, through its lobbying arm Strategic Marketing Innovations, has spent $230,000 in “defense acquisition” lobbying. That’s peanuts when compared to the $3.6 million that Lockheed has spent this year alone, but when combined with local interests of the politicians involved and the fact that New Balance agreed to cease its protests against the Trans-Pacific Partnership trade deal in exchange for the chance to compete for a Pentagon contract, it forms a pattern that suggests what Michael Needham writing in Real Clear Politics calls “revolving door politics.”

A more salient criticism of Section 808 would be that it would stymie choice. According to an Army study, there’s a strong correlation between running injuries and a lack of variety of running shoes to chose from. Limiting options in any way will almost certainly lead to an increase in injuries.

These are valid concerns, but any effective criticism of this particular proposal should also contain within in it a criticism of the Berry Amendment itself. And none of these do, which means that we should consider them obstacles to overcome rather than reasons for giving up entirely.

First of all, it isn’t cronyism that only one American shoe company currently has the ability to manufacture an athletic shoe. That would be a tragedy, but it’s also probably not true. DoD has enough economic heft to create its own demand. Other American shoe companies like Saucony have shown interest (of course, in the form of lobbying) in competing to make shoes for service members. And if global shoe companies want to compete for the contract, they would have to set up factories in America, hire Americans to staff said factories, and produce the shoes here. DoD would be creating that demand and incentivizing American manufacturing. It’s already happening with American textiles, which DoD spent $1.4 billion on in fiscal year 2014. If money is already being spent in the form of vouchers, why shouldn’t Congress fulfill the second demand of the Berry Amendment and attempt to grow our domestic production base of what is an important piece of military equipment?

And as for the argument that DoD issuing athletic shoes would hurt variety, I’m sympathetic, but not convinced. There definitely seem like ways we can creatively think around this problem: How about setting up a special program with New Balance where military personnel can custom design their own athletic shoe online? Or even just offer waivers if people can’t find the right domestic shoes for themselves, as sort of a last-ditch option?

To call the Berry Amendment “protectionist,” or an impossible workaround in a country naturally skeptical of government competence, is to misunderstand the role the military plays in making the free market possible at all. The Berry Amendment is meant to ensure that we as a nation recognize that and allocate our resources accordingly. To think that the government shouldn’t institutionalize a preference for American-made running shoes is to sell our military short. To think that the American economy can’t meet the demands of the military is to sell our industry short.