The Military Has Some Pretty Absurd Laws And Regulations

The U.S. military has its own set of laws called the Uniform Code of Military Justice, and its branches too... 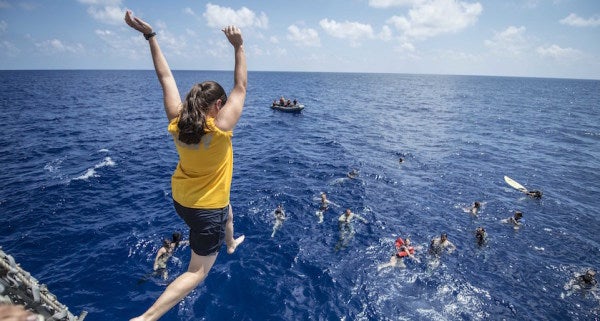 The U.S. military has its own set of laws called the Uniform Code of Military Justice, and its branches too have their own regulations. Though many of these laws and regulations are necessary, useful, or practical, others are outdated or just plain absurd.

Still, a number of these laws and regulations are still on the books and enforceable.

Adultery is punishable under UCMJ Article 134, with a maximum punishment of dishonorable discharge, forfeiture of all pay and allowances, and confinement for up to one year. However, this ruling has not proven to be absolute, especially in recent years. The adultery regulation is more circumstantial, and prohibits conduct that is of a nature to bring discredit upon the armed forces, or conduct which is prejudicial to good order and discipline. Still, cheating in your space can get you kicked out of the military.

The ban of the popular brand of sneakers known as FiveFingers is specific to the Army. Under ALARACT 241/2011 – Modifying Wear of Improved Physical Fitness Uniform pass in 2011, Army members are not allowed to wear sneakers that allow for the separation of toes. The doctrine specifically states, “Only those shoes that accommodate all five toes in one compartment are authorized for wear. Those shoes that feature five separate, individual compartments for the toes, detract from a professional military image and are prohibited for wear with the improved physical fitness uniform or when conducting physical training in military formation.” It’s probably for the best. Those shoes are more ridiculous than the regulation itself.

Jumping From A Vessel Into The Water

Also under Article 134, service members are not allowed to intentionally jump ship. If you fall, that’s fine. But the act of entering the water cannot have been willfully done. If a service member is held guilty of jumping from a vessel into a water, he can be punished with a bad conduct discharge, forfeiture of allowances and pay and six months of confinement.

The military, like as the government, has very specific requirements for its pens. Labeled “Skilcraft,” the pen consists of seven different parts and meets 16 pages of military specs — including that it be able to write for a mile with no fading and withstand temperatures up to 160 degrees and down to 40 degrees below zero, according to The Washington Post. Its use dates all the way back to the Great Depression.

Article 114 under the UCMJ prohibits the use of dueling to settle a dispute. Under this rule, service members engage others using swords, pistols, or fists. The article has four parts that allow for disciplinary action include dueling, promoting a duel, conniving at a fighting duel, and failure to report a duel. Dueling can result in dishonorable discharge, forfeiture of all pay and allowances, and confinement for one year.

If you’ve served or even know someone who has, you know that this law is complete bullshit. Still, under Paragraph 89 of Article 134, indecent language is prohibited within the military. What’s more, under Article 88, service members are not permitted to voice contempt against an official — meaning enlisted or lower ranked persons than a particular official are forbidden from using derogatory words against important officials. This includes derogation that is verbal, written, and even posted to social media sites.