How to crush your two-mile run like an Olympian

Of all the events that make up the Army Combat Fitness Test, the two-mile run generally causes soldiers the most grief 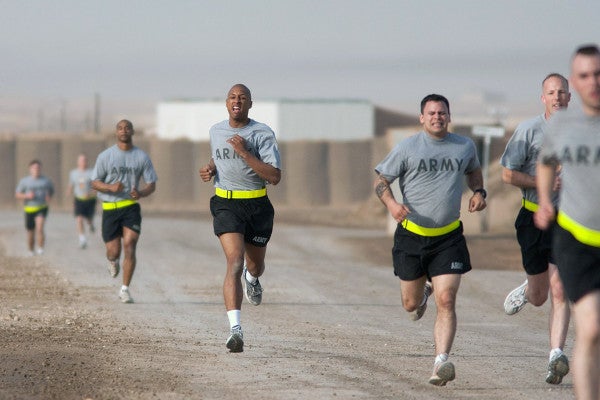 Of all the events that make up the Army Combat Fitness Test, the two-mile run generally causes soldiers the most grief. That’s because you can be in great shape but still consistently fall short of your goals. If you really want to crush your next Army Combat Fitness Test, you have to train for the two-mile as if it were an Olympic event. Which is why we asked Derrick Adkins to offer up some pro-level advice for soldiers looking to drop their two-mile run time.

Adkins won the gold medal for 400-meter hurdles at the 1996 Olympics and now trains coaches and professional athletes competing in endurance events.

“If you’re running a 15-minute two-mile right now and you want to take it down to 14 minutes, you could do that in two to three weeks,” Adkins told Task & Purpose. “But if you do this for six to eight weeks, I’d say you can take that 15 minutes down to 13.”

“Having the right shoes makes a big difference when you’re trying to do something like this,” says Adkins. “I recommend going to a specialty running shop instead of a big sports store. At these shops, the sales people are more than sales people; they’re experts who will look at your foot, your arches, and how you walk to find the right shoe for you.”

It’s never a good idea to combine the goal of dropping your two-mile run time with the goal of losing weight. Running a lot makes you hungry. So eat. “Try to consume only healthy carbs, fruits, vegetables, salads and whole grains,” Adkins says. “And there’s no need to cut down on the amount of meat and protein your body is already used to. Just stay away from fatty cuts and fried food. You can eat as much as you want as long as it’s healthy.”

A 400-meter track is the ideal venue for this because it allows you to measure time and distance accurately. To begin, you’ll want to establish a baseline by running two miles (or eight laps) around the track. This will give you a starting point. “If you can’t find a track, a measured course with mile markers will work, too,” Adkins says. “Avoid the treadmill. That’s a last resort.”

Begin with a 5–10 minute warm-up jog followed by some stretching. Then hit the straightaways for 10 100-meter sprints at 75% full speed. “After each 100-meter sprint, take your time walking back,” says Adkins. “Only do this once a week. You don’t need any more speed work than that.”

Since you’re training for a two-mile run, you’ll want to run between three to five miles two or three times a week. This will ultimately make the two-mile distance feel shorter and easier. “It’s okay to leave the track for this,” Adkins says.

“Intervals or tempo runs are paced runs a tad faster than your two-mile pace, but definitely not a sprint,” Adkins explains. The ideal interval distance is 800 meters, or two laps around the track. Run one interval at moderate pace and then rest for four minutes. Repeat three more times for a total of four intervals. Do this twice a week.

“Remember that your body actually gets stronger while resting, not while training,” says Adkins. “Training four to six days a week should be sufficient. Try not to train seven days a week. You need your rest.”

Contrary to what they used to teach us in the military, striking first with the heel of your foot while running is bad form. “If you see a pro marathoner caught in a still photo, they look flatfooted,” Adkins explains. “That’s because they’re striking mid-foot tending toward the front of the foot. That’s good form. On the other hand, if you see a still photo of a runner with his leg out in front and only his heel striking the ground with no other part of his foot touching, that’s wrong.” Good form also entails keeping your torso erect and your chin up. “If you have a slight forward lean, it should be very slight.”