7 Types Of NCOs You Deal With In The Military

Whether you serve in the military until retirement or just do four years and get out, to serve under the... 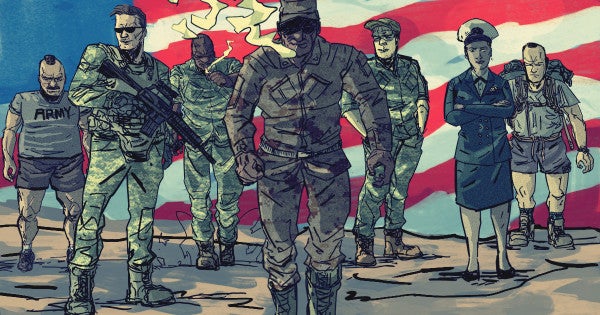 Whether you serve in the military until retirement or just do four years and get out, to serve under the leadership of a great noncommissioned officer is an experience that’ll continue to shape your personal and professional development throughout your lifetime.

But even the best NCOs are subject to criticism, especially from their subordinates. Troops like to complain, and there’s nothing they like to complain about more than the people who tell them what to do. Because, really, how else are you going to kill 14 hours in the motor pool?

Related: 7 Guys You Meet In Every Infantry Platoon »

Well, you could study for the promotion board, but, hey, let’s save the career advice for another time. Instead, here’s a totally sarcastic, illustrated list of the seven types of NCOs you meet in the military. Enjoy.

Angry, sadistic, and maybe just a little bit of a psychopath, Smokey is the bane of every private’s existence. Five minutes late to being 15 minutes early to formation? Better bring the BBQ sauce, amigo — you’re getting smoked. Forgot to shave? That’s 500 pushups. Dirty barracks room? That’s flutter kicks until you puke. But here’s the thing about Smokey: you hate his guts until you’re not privates anymore. Then you idolize him. Because now, for the rest of your life, you get to complain about how the “new military” has gone “soft.” Smokey’s abuse is the gift that keeps on giving.

These guys are a rare breed, but we’ve all known at least one. For new privates, especially the ones who joined the military to kick ass and take names, getting assigned to a Big Sarge’s squad or platoon is like showing up to your first day of high school football practice and discovering that your quarterback is not, in fact, a quarterback, but rather just a guy with crippling shin splints and a CamelBak full of Arby’s Horsey Sauce.

From a distance, Hollywood often gets mistaken for an officer. His hair is great. His teeth are pristine. He looks like he was born on a giant pile of money. When he runs he resembles a gazelle on steroids, and he always, always maxes out his PT test. But he’s dumb as rocks. It doesn’t matter, though, because he wears the uniform better than GI Joe himself. That’s 90% of the reason he got promoted. He’s a walking advertisement for the military. Also, his habit for telling anyone who doesn’t look like they were chiseled out of granite that they’re “really fat” is great motivation for everyone in the unit — a low self-esteem is the first step toward a high PT score.

Oh, you didn’t fight in the Second Battle of Fallujah? You’ve never killed an insurgent with an e-tool or strangled a Taliban commander to death with his own scrotum? Well, in that case, you’ll want to keep whatever complaints you have about the chow hall, or the mold in the barracks, or pulling back-to-back staff duty to yourself, because you haven’t earned the right to be bitter. But Salty Dog has, and you can bet your ass he’s exercising that right always. You can see it in his eyes — specifically, in the way they roll every time a lieutenant opens his mouth, or how they narrow whenever anyone below the rank of E-7 comes within 50 meters of his position. Salty Dog didn’t earn five Purple Hearts to come back home and deal with your shit.

The transition from lower enlisted service member to NCO is not an easy one. There’s usually an awkward period when the recently promoted is still figuring out how to break it to all of his old buddies in the E-4 Mafia (or, if he’s a Marine, the Lance Corporal Underground) that the dynamic of their relationship has changed. He’s no longer one of “them.” In some cases, however, that conversation never happens. Uncle Sham, despite the fact that he’s technically an NCO now, remains fiercely loyal to the lower enlisted cause, like a Sham Shield sleeper agent. That’s why his subordinates are always so happy, and well-fed, and well-rested, and for some mysterious reason never, ever around.

The only thing faster than Fast Track’s three-mile run is her ascent from the lower enlisted ranks. One day she’s the brand new soldier in the unit, and then, boom, suddenly she’s sticking a knife hand in your face and screaming about how tough she had it when she was a private (six months ago). How did this happen? Because while all of her peers were busy being privates, Fast Track was in her barracks room actually reading the books on the Commandant’s Reading List and memorizing the maximum effective range of every weapon on Earth. This made her very unpopular with her peers, but it didn’t matter, because, well, they weren’t her peers for very long.

When winter arrives and snow blankets the earth, service members don their gloves and jackets to shield their bodies from the bitter cold. That is, unless you work for this guy. Because warmth is a crutch. And so is sleep. And so is food. And so is everything else that doesn’t suck. In this guy’s platoon, you don’t just train to fight, you train to train to train to fight. Then you get back from deployment, kiss your wife, and train some more. While all of your buddies are hanging out at the bar after work, you’re cleaning gear for a field exercise scheduled for next October. And while everyone else is enjoying their Saturday, you’re rehearsing for World War III in the battalion parking lot. It’s not fun — but, hey, you didn’t join the U.S. Army Signal Corps to have fun.