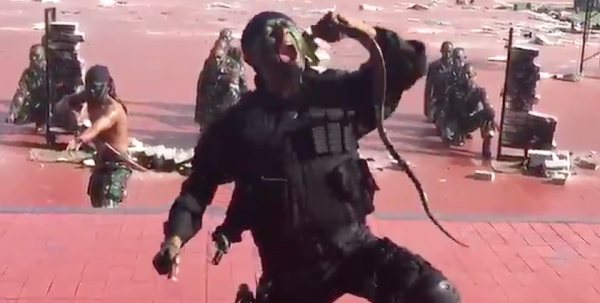 Special forces in Indonesia demonstrates to Mattis their ability to eat snakes. pic.twitter.com/I24p5adzsG

Following a massive Jan. 24 parade of Indonesian armed forces that included fire-jumping, trick shooting, and other less-than-tactical feats of strength, commandos from the country’s elite (and disreputable) Kopassus special operations group decapitated King Cobras before imbibing their sweet, sweet blood. And according to a Washington Post account of the proceedings, Mattis appeared to like what he saw:

The real show-stopper came when camouflage-streaked soldiers wrangled various snakes including King Cobras, severed their heads with knives and drank blood on the steps of the headquarters building. At least one soldier bit into a snake's neck as its tail whipped and curled and the troops belted war cries. He then knelt as a fellow soldier squeezed blood into his mouth from another snake.

Mattis clapped and grinned widely at the spectacle.

Yes, going to pound-town on some lethal snakes is a great way to make an enemy's genitals instantly retract into their torso, but don’t be fooled by Mattis’ polite applause: You’ll have to do way better than a King Cobra to impress a retired member of the U.S. Marine Corps.

The annual Cobra Gold exercise conducted by U.S. and Thai forces are part training session, part exotic buffet: As Marine Corps Times reported in February, Marines and sailors get a chance to suck down some cobra blood, among other delicacies — including spiders and scorpions. “The is more of a local tradition,” Marine Cpl. Isaac Ibarra recounted of his own blood session in 2015. “By some accounts, its intended effect is to instill bravery.”

If snake guzzling is meant to function as hype-centric boost, Marines regularly consume way, way more intense stuff than reptile blood. I mean, we’re talking about the U.S. armed forces, the military machine that chose the mysterious (and presumably illicit) energy drink Wild Tiger as its elixir of choice after the 2003 invasion of Iraq, the perfect chaser for gastrointestinal nightmare MRE candy. And if intimidation is the goal, who needs snake blood when Iraqi citizens are somehow under the impression you have to eat a baby to become a Marine?

We appreciate Indonesian special forces’ efforts to impress Mattis with their uninhibited cobra feast, sure. But we’ll be really impressed when those Kopassus simmer down, take a seat, and work their way through an entire box of crayons.