These Russian Special Forces Gunfighting Moves Are Beautiful And Ridiculous

If a modern measure of power is the capacity to dominate the attention of others, then the Russia Ministry of... 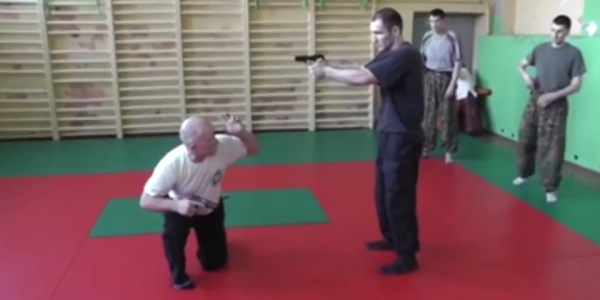 If a modern measure of power is the capacity to dominate the attention of others, then the Russia Ministry of Defense is a hot, powerful mess. Russian mercenaries rolling deep in Syria! Russian cargo planes crashing in Syria! Russian leaders pounding down popcorn while Washington spirals deeper and deeper into a pit of feverish despair. I am goddamn sick and tired of hearing about Russia doing all sorts of cool shit.

What’s that? Have you a brief video to allay my rage and lighten my spirits? Glory fucking be, tell me more:

Look, defensive handgun combatives are no joke, especially in the close-quarters of room-clearing in urban shooting galleries like, say, Mosul or Raqqa. But damn, there’s just something about a grizzled Russian, likely stinking of vodka, rolling around on the floor in search of a quick and effective dick punch. It’s very reminiscent (or so I’m told by our mustachioed commandant) of David Carradine’s bullet dodging in Kung Fu: The Legend Continues.

Anyway, Russia’ elite KSSO special operations forces turned five last week, so there’s that. But at least their regular routines are as dumb and weird as ours!