This excerpt is adapted from Max Boot’s New York Times bestseller, The Road Not Taken: Edward Lansdale and the American... 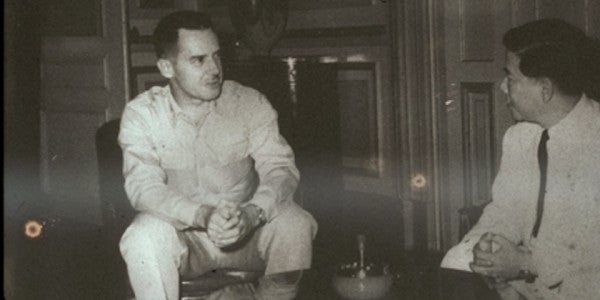 This excerpt is adapted from Max Boot’s New York Times bestseller, The Road Not Taken: Edward Lansdale and the American Tragedy in Vietnam, which was released in January.

Edward Lansdale got his first intimation of what Robert McNamara was like in the early days of 1961 when he was summoned to the Pentagon’s inner sanctum, Room 3E-880, to give the new defense secretary a ten-minute briefing—and not a second more—on his Vietnam trip. He knew that McNamara, who had come to the Pentagon from running the Ford Motor Company, had no background whatsoever in guerrilla warfare in general or Vietnam in particular. McNamara later admitted as much, conceding, “I had never visited Indochina, nor did I understand its history, language, culture, or values.”Lansdale sought to begin McNamara’s education by bringing with him a collection of Vietcong weapons, including “handmade pistols and knives, old French rifles, and bamboo punji sticks,”that he intended to donate to the Special Forces headquarters at Fort Bragg.

Lansdale found the defense secretary wearing, as always, a dark suit, his thick brown hair slicked back on his head and parted in the middle, old-fashioned wire-rim spectacles framing his mirthless eyes, his jaw clenched tight, a severe expression on his face, looking very much like the Presbyterian elder that he was. He was ensconced behind his nine- foot-long mahogany desk, which was polished to a mirror like shine and adorned, as a reporter noted, “with half a dozen in-and-out baskets brimming with problems of peace and war.”Behind him was a portrait of his tightly wound predecessor James Forrestal, who would be driven by the pressures of the post to commit suicide. It was a fitting if unconscious warning of the way that McNamara himself would crack under the pressure of the Vietnam War.

Lansdale unceremoniously dumped his cargo of dirty weapons, caked with mud and blood, on the secretary’s immaculate desk with a “great clatter.” He recalled telling McNamara, “The enemy in Vietnam uses these weapons—and they were just using them just a little bit ago before I got them. Many of them are barefoot or wear sandals. They wear black pajamas, usually, with tatters or holes in them. I don’t think you’d recognize any of them as soldiers, but they think of themselves that way. The people that are fighting there, on our side, are being supplied with our weapons and uniforms and shoes and all of the best that we have; and we’re training them. Yet, the enemy is licking our side. Always keep in mind about Vietnam, that the struggle goes far beyond the material things of life. It doesn’t take weapons and uniforms and lots of food to win. It takes something else, ideas and ideals, and these guys are using that something else. Let’s at least learn that lesson.”

“Watching his face as I talked,” Lansdale was to say, “I got the feeling that he didn’t understand me. Too unconventional. Somehow I found him very hard to talk to.”That was because Lansdale did not speak McNamara’s language—the language of numbers.

Ever since he was a schoolboy, Robert S. McNamara had been entranced by the seductive logic of mathematics. As an undergraduate at the University of California at Berkeley, in the 1930s, he began, he later said, “to talk and think in numbers.”That tendency became even more pronounced during his postgraduate studies at Harvard Business School, where he became convinced that a mastery of financial data was the key to business success. Cold, unemotional, aloof, and intolerant of those less brilliant than him, Bob McNamara began to cultivate a reputation as a human computer—an “IBM machine with legs.”During World War II, he became a statistician in uniform, helping the Army Air Forces to maximize the effectiveness of their bombing campaign against Japan. In a sign of what was to come in Vietnam, his number crunching helped kill hundreds of thousands of civilians, but he remained seemingly impervious to the human cost of his work.

After the war, he and his fellow Air Force statisticians, dubbed the Whiz Kids, moved en masse to the Ford Motor Company, where they engineered a turnaround employing quantitative methods, much to the chagrin of automobile enthusiasts such as Lee Iacocca. McNamara’s incisive biographer Deborah Shapley was to write that he became “the epitome of a bean-counting manager who understood nothing about engineering cars.”Appointed defense secretary by Jack Kennedy, McNamara began, with the help of his Whiz Kids, to apply his number-crunching philosophy to the armed forces.

“You can’t substitute emotions for reason,” he often said.He honestly believed that if only you got the inputs right, his mathematical models would unerringly spit out the right answers to such complicated questions as: How big should America’s nuclear arsenal be? What kind of next-generation fighter airplane should the Air Force and Navy buy? And how should the United States respond to Vietcong attacks? Anyone like Lansdale who tried to challenge McNamara’s “systems analysis” was given short shrift by the imperious secretary.

Excerpted from The Road Not Taken: Edward Lansdale and the American Tragedy in Vietnamby Max Boot. © 2018 by Max Boot. Used with permission of the publisher, Liveright Publishing Corporation, a division of W.W. Norton & Company, Inc.