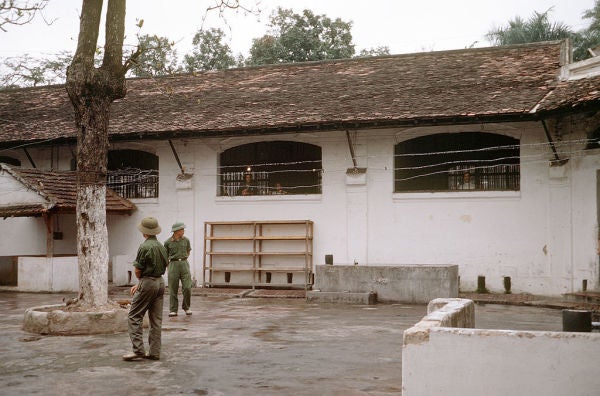 It’s worth pointing out that Hawk is the adopted stepdaughter of the book’s subject, Jim Shively. The book is based on the recorded accounts from Shively and interviews with his contemporaries. As such, it presents a very unblemished account of Shively’s life. It falls a little bit into the category of hagiography instead of biography.

That said, “Six Years” is a fast read for those with an interest in history related to the air war in Vietnam. At 229 pages, including endnotes and index, it’s an entertaining way to spend an afternoon. It begins with a concise account of the career and lifestyle of an Air Force pilot of the early 1960s. Today’s pilots will read accounts of low passes over civilians and parties both in the US and abroad and long for the old days.

This is where the fact that the book is written by a family member takes its toll — that could have greatly fleshed out the personality of young Jim Shively, but we don’t get to read it. It sounds as if he must have been an interesting young man with a lot of stories, but unfortunately, all this potentially great background story gets rolled under a broad catch-all of “what happens in Vegas…”

Military pilots will have some issues with some elements of Hawk’s account, though. A high-G turn is a “break,” not a “brake,” for example, and the responsibilities of each pilot in the formation are explained unclearly. Pilots will recognize other descriptions of aviation in the book, but they read slightly off, as if relayed from a pilot to a civilian, which they were.

The book’s account of Shively’s capture was moving. Before he pulled his ejection handles, Shively knew he faced a choice between death and imprisonment. He chose to survive. One wonders whether he ever regretted that choice during the days ahead.

The book is different than most when it discusses the early years of Shively’s imprisonment. The torture facing POWs in Vietnam is well-known. “Six Years” doesn’t skimp there. Its account of the infamous “rope torture” is extremely vivid, and will make any reader wonder how he could withstand it for minutes, let alone hours. The book’s descriptions of the diseases facing the prisoners and the camaraderie between them are as good as any of the genre. The dysentery was nearly as much of an enemy as the North Vietnamese.

“Six Years” spends much of its short length describing the POW’s conditions from 1970 on, when conditions were actually improving for them. The elaborate plays and classes the inmates of the Hanoi Hilton have been covered in other works, but “Six Years” covers them well. It does lapse into a little bit of sappiness when it comes to God, country, and the American flag that fellow POW Mike Christian improvised, made famous by John McCain’s 2008 Republican National Committee speech. Some will find those accounts as the best part of the book. Others will find them overdone and too idealistic.

And that divide summarizes the whether you will like reading “Six Years in the Hanoi Hilton” or not. If you want a tough-as-nails, kickass war story, you will be disappointed. If you want an inspirational account of a man whose faith in God and country got him through a horrible ordeal, then this is your book.

If you are history-minded and want to do a deep dive into how POWs were treated in North Vietnam, this is worth putting on your reading list, but only after “Faith of my Fathers,” “The Nightingale's Song,” “Five Years to Freedom,” and “Into the Mouth of the Cat.” What those accounts lack, though, is the everyman’s perspective. McCain’s captivity is well-known. James Rowe of “Five Years” was one of the few POWs to escape captivity. Lance Sijan of “Into the Mouth of the Cat” was a Medal of Honor-earning superman. Jim Shively represents the ordinary man becoming extraordinary through adversity. And for some readers, that’s exactly the inspiration they need.

“Six Years in the Hanoi Hilton: An Extraordinary Story of Courage and Survival in Vietnam ” by Amy Hawk (Regnery History, 2017) was released March 13, 2017.