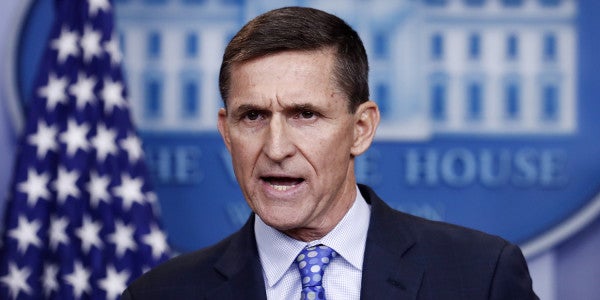 Michael Flynn, Sr., retired lieutenant general and world-record holder for the shortest-serving national security advisor, is still in trouble. Big trouble. Trouble so deep that even the Republican chairman of the House Oversight Committee is saying he broke the law.

But this isn’t about Flynn’s forgotten chats with Russia's U.S. ambassador, or his alleged ties to Russian election-tampering. This is about Flynn, a 33-year veteran of the armed services, falsifying his SF-86 application for a White House security clearance in January to conceal big sums of money he received lobbying for Russian and Turkish government interests — much of it earned while he was working on Donald Trump’s presidential campaign.

After months of prevarications that cost Flynn his job and earned him some harsh headlines, Buzzfeed’s Hayes Brown reports that even the reddest Republican and bluest Democrat on the House oversight panel are about done with Flynn’s crap:

Reps. Jason Chaffetz and Elijah Cummings, the chair and ranking member of the committee, told reporters Tuesday that following a briefing with the Defense Intelligence Agency (which Flynn once headed), they believed that the former general had not properly listed income he received in 2015 from Moscow.

“Personally, I see no information or no data to support the notion that General Flynn complied with the law, and that is, he was supposed to seek permission and receive permission from both the secretary of state and the secretary of the Army prior to traveling to Russia to not only accept that payment but to engage in that activity,” Chaffetz said. “I see no evidence that he actually did that.”

Here's video of Chaffetz and Cummings chiding the chap with the foreign cash:

Cummings pointed out that falsifying your SF-86 exposes you to prosecution and a potential five-year prison sentence. Chaffetz didn’t go that far, but he didn’t sugarcoat Flynn’s fuckups, either, saying the now-disgraced former DIA chief should at least have to pay back some of his sketchy earnings:

“If that money was received by General Flynn, and we believe that it was, that money needs to be recovered,” Chaffetz said. “That final determination, again, will have to come from the Department of the Army as well as the Department of Defense, but as a former military officer, you simply cannot take money from Russia, Turkey, or anybody else.”

“It was inappropriate. And there are repercussions for the violation of law,” he said.

On the one hand, Mike Flynn can’t catch a break. On the other hand, what’s a 58-year-old lifer doing hiding foreign payments on an SF-86? This is basic enlistee stuff… literally. My high school buddy, who wanted to be a cryptological technician, had to enlist as a Navy yeoman because he disclosed a credit-card charge-off from college on his 86. Too bad he didn’t have a Turkish or Russian sugar daddy.

Update, 2:44 PM EDT: Flynn has released a statement through his attorney:

Of course, Reps. Chaffetz and Cummings held their press conference saying Flynn had violated the law… after being briefed on Flynn's work by the DIA. This would suggest that the agency Flynn once headed is not as sanguine as he is about the allegations against him.