How Flynn Became The Shortest Serving National Security Advisor Ever

After the world’s shortest appointment to the post of national security advisor, retired Army Lt. Gen. Mike Flynn has resigned... 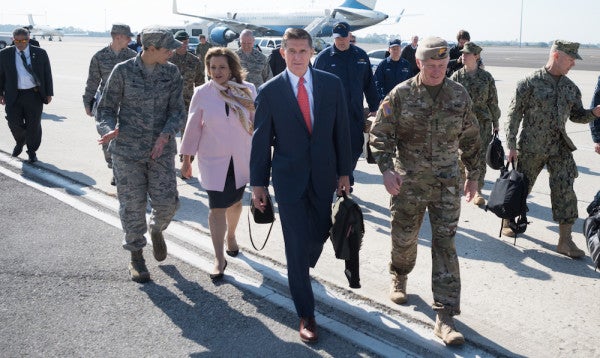 After the world’s shortest appointment to the post of national security advisor, retired Army Lt. Gen. Mike Flynn has resigned his post amid a scandal. He lasted a mere 24 days.

Retired Army Lt. Gen. Mike Flynn was a controversial choice to be President Donald Trump’s national security advisor from the beginning. There was that time a consulting company paid him to speak at the Russian news outlet RT, his history of tweeting links to stories by alt-right luminaries and fake news articles, and of course his son’s (since deleted) tweets about the notorious non-story known as Pizzagate, which got junior kicked off the transition team.

But that changed last week, when it was revealed that Flynn’s contacts with a Russian diplomat — which occurred on the same day the United States was placing sanctions on Russia in response to the interference with the election — went further than he’d admitted.

It was no secret that Flynn has close ties to Russia. But it has now been revealed that he attempted to hide the true nature of his dealings with Russian ambassador Sergey Kislyak from the rest of Trump’s administration.

As the administration struggled to deal with fall-out over news of Flynn’s pre-inauguration phone calls to Kislyak — which were placed on Dec. 29, the day the Obama administration announced the expulsion of 35 Russian diplomats in connection with the their interference with the election — Vice President Mike Pence defended him, insisting that the communications did not involve the sanctions.

“I talked to General Flynn about that conversation,” Pence told CBS on Jan. 15. “He had sent a text to the Russian ambassador to express not only Christmas wishes but sympathy for the loss of life in the airplane crash that took place…. They did not discuss anything having to do with the United States’ decision to expel diplomats or impose censure against Russia.”

Flynn denied speaking with Kislyak about sanctions as late as Feb. 8. But a day later, after The Washington Post reported that nine intelligence officials had seen evidence that sanctions were in fact discussed, he began to back away from his denial. A spokesman indicated that Flynn did not recall discussing sanctions, but he “couldn’t be certain that the topic never came up.”

Because these calls occurred pre-inauguration, Flynn technically acted as private citizen in a way that could be construed as undermining U.S. foreign policy. He could also be charged with a crime under the Logan Act — a statute that bars private interference in foreign policy disputes.

In the wake of the Post’s exposé, the White House published a statement on Feb. 10, suggesting it supported Flynn. On Meet the Press on Sunday, policy advisor Steven Miller sidestepped questions about Trump’s confidence in Flynn, leading to speculation that he was on his way out. “It's not for me to tell you what's in the president's mind,” Miller told Chuck Todd on NBC’s “Meet the Press.” “That's a question for the president.”

But yesterday, Kellyanne Conway once again spoke of the president’s confidence in Flynn, shortly before he resigned.

It remains unknown at what point Trump was made aware of the details of conversations between Flynn and Kislyak. When Todd asked Miller if the president would consider being left in the dark on this issue a fireable offense, Miller refused to speculate on a “hypothetical question.”

However, CNN reported that the Justice Department had warned the White House about Flynn’s communications with the Russians back in January — out of concern that he could be blackmailed over his false statements. That message was delivered by then-acting Attorney General Sally Yates, who was later fired by Trump over her refusal to defend the controversial travel ban.

In his resignation letter, issued yesterday, Flynn publicly apologized for covering up the conversations and expressed his remorse to Pence, who defended him.

As for the job Flynn leaves behind, that of national security advisor, Trump is said to be considering several candidates, including Gen. David Petraeus, who is expected to visit the White House today.

Read the full text of his letter below: