Ask any expert in nuclear game theory: It's not exactly mai-tais and Yahtzee. And when you’re dealing with a 100-kiloton... 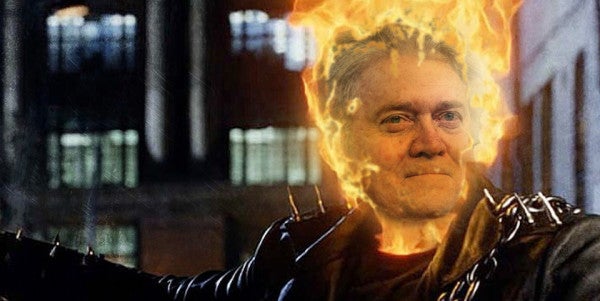 Ask any expert in nuclear game theory: It's not exactly mai-tais and Yahtzee. And when you’re dealing with a 100-kiloton hydrogen bomb, it can be hard to, as they say, put…the bunny…back…in the box. That's why President Trump recently tasked the Defense Department with drawing up a new set of military options for dealing with Kim Jong Un's nuclear threat. But Pentagon officials are apparently worried that giving Trump too many options for taking out Rocket Man will only increase the likelihood of an all-out war with North Korea. Don’t worry, Mr. President, we’ve got you covered. Here are a few suggestions:

1. Put Dennis Rodman into a coma, then surgically swap his face with that of Michael Flynn Jr., a trained intelligence operative with a decent jumpshot. Send Flynn/Rodman into Pyongyang with orders to terminate Kim with extreme prejudice.

3. Send amateur cryptographer Alex Jones to decode the Declaration of Independence and uncover the treasure of the Knights Templar. Induct Kim into the Freemasons, then team up with him to find the hidden loot. Lure him into the catacombs beneath New York's Trinity Church, and take him out. Then use the treasure to build a beautiful wall on the Mexican Border.

4. After carefully removing a plank from the Resolute Desk, and asking UK Prime Minister Theresa May to do the same to her resolute desk, have operative Sebastian Gorka scan them for secret glyphs and enlist Kim's help decoding them, following the trail to an ancient solid gold village under Mount Rushmore. When the city begins to flood, convince Kim to hold the door open and leave him to die.

5. Tempt Kim to go into business with international arms dealer Paul Manafort, supplying nukes to a brutal dictator in Sierra Leone in exchange for a cache of diamonds. When Kim and the dictator decide to wipe out a refugee camp, frag them with a few grenades, then take the diamonds and have them made into a necklace, an apology gift to Melania.

6. Dress Jared Kushner in a bear suit, and send him to attend the national feast day commemorating the birthday of Kim's father. When Kushner is captured, hobbled with a mallet, placed in a wicker helmet filled with bees and stung to death, adopt a strategy of containment and work with China to tighten sanctions.

7. Find a fearless stunt motorcycle rider with an almost supernatural ability to survive really dangerous situations and take something from him that is so precious he’ll literally do anything to get it back. Steve Bannon, the lord of the underworld, will then give the biker this ultimatum: Kill the power hungry Kim Jong Un — who, it turns out, is Bannon’s son — or spend the rest of eternity working as a fact-checker at Breitbart.

8. Sentence ex-British spy Christopher Steele to life in Guantanamo Bay for a crime he hasn’t been charged with. Then assemble a crack team of Navy SEALs and throw in a silver-tongued FBI chemical weapons specialist for good measure. Promise Steele freedom in exchange for using his knowledge of North Korea to help the team infiltrate Pyongyang and assassinate Kim Jong Un before he can blow up California. Exactly like this: