U.S. Navy unmanned underwater vehicles have been deployed to the southern Atlantic to assist in the search for a Argentine... 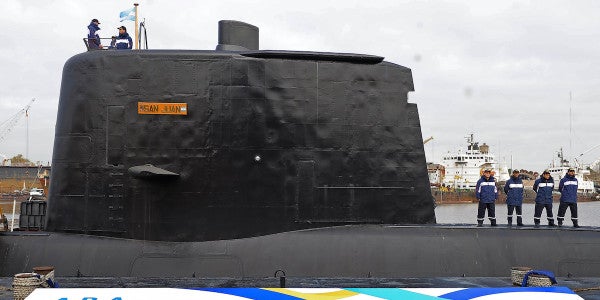 U.S. Navy unmanned underwater vehicles have been deployed to the southern Atlantic to assist in the search for a Argentine submarine that went missing last week. Rescue personnel from several countries are racing to locate the vessel, as the likelihood of the crew’s survival diminishes dramatically with every passing day.

Forty-four sailors are aboard the ARA San Juan, a German-made submarine that entered the Argentine fleet in 1985, which last made radio contact from off the coast of Patagonia on Nov. 15. The fate of the crew remains a mystery. The vessel was due to arrive at its home port on Nov. 19.

There were indications that seven radio transmissions detected over the weekend might have come from the San Juan, but hopes were dashed on Monday when an Argentine navy spokesman announced that the reports were wrong.

The situation is becoming increasingly dire. Argentine, British, Brazilian, Chilean, and American military personnel in ships and aircraft have been contending with thunderstorms and massive waves as they scour a 186-square-mile search area off the coast of Patagonia.

“These are less than favorable conditions that do make things difficult,” Cmdr. Erik Reynolds, a U.S. Navy spokesman, told The New York Times. “You’re talking about 44 sailors out there. If they’re in trouble, there’s a finite amount of time to get to them, so I think there is a great deal of concern by the international community.”

Both the Bluefin 12D and the Iver 580 are capable of searching wide areas of the ocean using so-called “Side Scan Sonar,” which the Navy says is used to map out the sea floor. The Bluefin 12D can operate at a maximum depth of almost 5,000 feet for 30 hours, while the Iver 580 can operate for up to 14 hours at a depth of 325 feet.

CNN reports that if the ARA San Juan sunk but is still intact, crew members would have somewhere between 7-10 days worth of oxygen. If the vessel has surfaced, the sailors would have enough food and fresh water to survive for at least 25 days, an anonymous Argentine Navy official told The New York Times.

The Washington Post reports that the San Juan has multiple ways of communicating, and that in the event of a communications blackout, it is protocol to surface. The worst-case scenario is that the submarine sunk as a result of a catastrophe, such as a fire or explosion.

“The fact that we haven’t had communication for so long, that it didn’t show up at port as expected, and the fact that at least the initial search effort hasn’t found anything yet all point to the fact that the submarine may well unfortunately been lost,” a retired U.S. Navy submarine commander told The New York Times.