The VA’s New Vet ID System Had A Rough Debut

People are usually surprised when I tell them I’m a veteran. They say things like, “you were in the military?”... 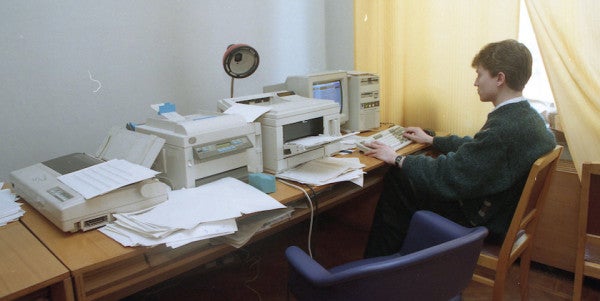 People are usually surprised when I tell them I’m a veteran. They say things like, “you were in the military?” And, “wow, I would’ve never guessed!” This is very frustrating, because I know that what they’re actually saying is, “You don’t look like you’ve ever done a push-up in your life.”(I haven’t). But it’s especially frustrating when the person casting doubt on my military credentials is a waitress at Applebee’s on Veterans Day and I end up having to pay for that bowl of Sirloin Stir Fry I earned on the battlefields of Iraq and Afghanistan.

Those days were supposed to be over. In early October, the Department of Veterans Affairs announced that beginning in November it would start issuing Veteran Identification Cards to provide vets like me a quick and easy way to prove that we served in the military. To apply, all you have to do is log in to Vets.gov, enter some basic personal information, upload a recent picture of yourself and a government-issued ID, and hit the submit button. Then, kick back, relax, and wait for your brand new vet card to arrive in the mail within 60 days.

Easy, right? Well, in theory. Although the VA kept its word and started accepting applications for the cards on Nov. 29, Military.com immediately reported that “after multiple failed attempts and error messages, reporters … were able to fully test the new application system and request an ID card using their own VA log-ins and military service credentials.”

Task & Purpose decided to take it for a spin. Seven T&P; staff members, all honorably-discharged veterans, applied. Their efforts were rewarded with a series of error messages that said things like “Warning: We cannot proceed with your request” and “We’re unable to verify you at this time.” But that’s it. After an hour of trying to submit applications, all came up empty handed.

“I followed the steps from the VA page, verified my identity with ID.me — including handing out my social, online, for the umpteenth time to some government-sourced website — only to have the VA site glitch and say I wasn’t logged in,” said one disheartened staff member, echoing complaints from his colleagues. “Stuck in the same loop,” lamented another. “I think the digital signature is the snag, but they don’t explain how to fix that all.”

Task & Purpose asked if the department knew veterans were having trouble applying for the card.

“We are aware some Veterans have experienced issues with the application process, but leaders of VA’s Office of Information and Technology are actively engaged in fixing them,” VA press secretary Curt Cashour told Task & Purpose when reached for comment on Nov. 30.“Still, many Veterans have successfully registered for the card in the 24 hours since the program was announced, and we are excited finally to begin providing this resource to Veterans, fulfilling a promise that was made to them more than two years ago under the previous Administration.”

While Cashour said that the department is releasing a patch tonight that “should address some of the challenges,” the snafu underscores the slew of challenges that have plagued the VA since it unveiled the new ID cards in, many of which appear tied to the fact that Congress neglected to allocate any funds for the initiative.

Many veterans who tried to register with Vets.gov following the announcement encountered unexpected obstacles, sending the VA’s IT department scrambling to plug loopholes and remove arbitrary barriers. Meanwhile, an early prototype of the card released in mid-October was emblazoned with the Office Depot logo. Concerns were raised. Was Office Depot sponsoring a card that the VA, a federal agency, was mandated by law to issue to veterans to make it easier for them to secure discounts from “private institutions” like Office Depot?

Cashour insisted the collaboration was not mutually beneficial, telling Task & Purpose in October that Office Depot was just “printing and providing” the cards so veterans wouldn’t have to pay for them. “It’s not a sponsorship,” he said. Military.com reported on Nov. 29 that it was shown a preview of the new card after successfully submitting the application, and there was no Office Depot logo to be found.

For those unfortunate veterans who — like the Task & Purpose staff — were unable to apply for the card, there’s hope. Cashour said that the VA’s Office of Information and Technology will be releasing a patch tonight that “should address some of the challenges.” We’re holding our breath.