As the Trump administration sought to expand private health care options for veterans, it awarded lucrative Department of Veterans Affairs... 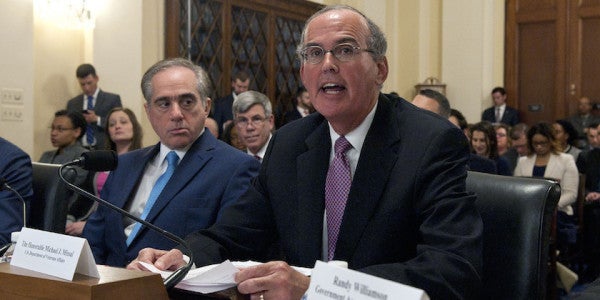 As the Trump administration sought to expand private health care options for veterans, it awarded lucrative Department of Veterans Affairs contract extensions to two companies that are under investigation for over-billing the United States government by tens of millions of dollars, The Arizona Republic reports.

TriWest Healthcare Alliance and Health Net Federal Services have multi-billion dollar contracts with the VA to facilitate private healthcare services for military families and veterans as part of the VA’s new Veterans Choice program, which was created in 2014 after Congress passed the Veterans Access, Choice and Accountability Act.

The bill allocated $10 billion to give veterans a private medical option, but has cost taxpayers upward of $12 billion to date, according to The Republic. An audit launched by the VA Office of Inspector General after anonymous comments on the employer review websiteglassdoor.com found that some of that money has vanished into corporate coffers.

The inspector general recently reported to Congress that the two companies have collected at least $89 million more than what they were supposed to. At least must be emphasized, as the audit is still ongoing (the inspector general’s office says it should be completed by the end of the year). TriWest is also being investigated by a federal grand jury for possible wire fraud and misuse of government funds.

“This was a senseless waste of resources that could have been better spent on veterans’ health care,” Republican Rep. Phil Roe, chairman of the House Committee on Veterans’ Affairs, wrote to VA Secretary David Shulkin in September, according to The Republic. “I am disappointed in the department’s continued lack of urgency to prevent these extensive over-payments.”

TriWest and Health Net have overseen the VA Choice program since it was launched in 2014 to help alleviate tremendous strain on the VA. Mounting backlogs had resulted in infamously — and occasionally deadly — long wait times for veterans seeking treatment at its facilities. In some cases, veterans had to wait months to see a provider.

Now, if the VA can’t schedule an appointment for a veteran within a month, or if a veteran lives more than 40 miles from one of its clinics, they can access a network of private clinicians and hospitals managed by TriWest and Health Net.

At least, that’s how it’s supposed to work.

The two companies were given only 90 days to set up the program, and it was plagued by problems from the start. According to NPR, “within three months, TriWest returned referral authorizations of 172 out of 192 gastroenterology cases, and 57 of those patients had to be seen immediately because they had symptoms of significant ailments, such as cancer.”

In September, VA Inspector General Michael Missal issued a memorandum that listed four major “errors” that had resulted in excess payments to TriWest and Health Net. These were:

How much all of this cost taxpayers is not yet known. Missal stated in his memorandum that duplicate payments alone racked up $89.7 million in overpayments to the two companies. He has ordered Health Net to reimburse the VA $50.8 million, while TriWest owes the remaining $38.9 million. “Our audit staff has attributed these errors to the lack of an appropriate payments process for Choice claims and an inefficient internal control system,” Missal wrote.

In an interview with The Republic, TriWest CEO and President David McIntyre insisted that his company was not at fault, and that the VA’s billing system was to blame for the overpayments. He also claimed that Tritest had been the first to notify the VA of the overpayments in a July letter to the department. “We’re the ones who actually brought it to the government’s attention,” he said. “We were seeking a process to return the funds. There was no process in place. We now have returned some of the money.”

However, VA representatives rejected McIntyre’s claims in a statement to The Republic, claiming that the excess payments had been identified prior to the July letter, which they said “did not contain new information.” The Republic notes that the letter was sent 18 months after the inspector general inquiries began.

This isn’t the first time TriWest has been investigated for mismanaging government funds. The company paid the Justice Department $10 million in 2011 to settle a lawsuit that, according to The Republic, “alleged the company ‘systematically defrauded’ the TRICARE health system for uniformed military personnel.”

Nevertheless, Congress and the Trump administration, including Shulkin, are pushing hard to expand private care options for veterans, and McIntyre told The Republic that his company is one of five bidding to oversee the expansion under a five-year contract.

Both TriWest and Health Net’s current contracts with the VA were also extended through Sept. 30, 2018. The VA explained to The Republic that the extension was granted because the agency “has no other immediate options available to perform the functions of current contracts.”