Did Congress Just Screw 7 Million Vets Out Of Their Tax Credits?

A bill to repeal Obamacare has made it through the House, again — and this time, it’s for real. But... 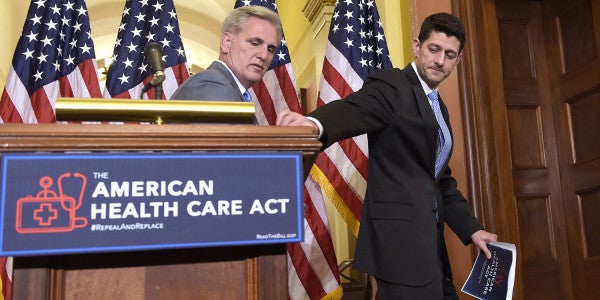 A bill to repeal Obamacare has made it through the House, again — and this time, it’s for real. But in their speed to pass a new health care bill for all Americans, House Republicans may have opened a door to screwing 7 million vets out of subsidies that could help them pay for private health care.

Rep. Phil Roe, the Tennessee Republican who chairs the House Committee on Veterans Affairs, swears that’s not the case. “No matter what verbiage you hear, nothing in this bill changes how veterans are treated under the law. Nothing,” he said in remarks on the House floor this morning. “It ain’t gonna happen.”

But it’s not at all clear that Roe is correct.

The messy, bureaucratic controversy centers around a little pro-vet provision in the Republicans’ bill, the American Health Care Act, that was removed as part of the GOP’s efforts to win a vote on the entire 126-page proposed law. And it illustrates some of the ways in which age-old legislative rules, acrimonious political debates, and the needs of real Americans can collide in Congress — with maddening results.

Among other things, the AHCA continues to offer Americans tax credits they can use to buy health insurance, similar to the subsidies offered to ease insurance costs under Obamacare.

But there’s a catch: To qualify for insurance tax credits, you can’t be eligible for “other” low-cost government health care… like VA care. In other words, if you’re a vet who’s eligible to get treated by the Department of Veterans Affairs, you wouldn’t qualify for tax credits on private health insurance.

That’s an obvious problem. By one expert estimate, some 7 million Americans are eligible for VA care, but not enrolled. Without some help, they could be barred from picking up the same insurance subsidies that other Americans qualify for.

In their initial draft of the AHCA, Republicans anticipated this problem: A small provision titled “SPECIAL RULE WITH RESPECT TO VETERANS HEALTH PROGRAMS,” on page 97 of the bill text, declared that vets who weren’t being seen in the VA system would stay eligible for insurance tax credits.

There was only one problem with that: Republicans didn’t think the bill could withstand a filibuster by Senate Democrats, so they used an arcane legislative process to squeeze the bill through to an up-or-down vote. That process — reconciliation, the same process Democrats used to pass a budgetary companion to the original Obamacare bill in 2010 — limits debate on the bill, but it also limits what Congress can do in the bill.

In this case, reconciliation meant that the bill couldn’t contain any language that required review by a non-budgetmaking committee in Congress. If Republicans wanted to keep the exception for vets, they’d have to submit the bill to the House Committee on Veterans Affairs for hearings and markups… and then it would be a regular legislative proposal, subject to slow deliberation… and a Senate filibuster. (If you’re not drinking yet, now might be a good time to start.)

So, to preserve the reconciliation process, the pro-vet language came out of the bill when Republicans first pushed for an AHCA vote in March — and news organizations noticed the change. Not just mainstream news organizations, but conservative-leaning ones, like Newsmax, which warned that the AHCA “could deny millions of veterans tax credits that are important for their healthcare.”

“It’s entirely possible this was an unintentional error on the part of staff, but it raises the larger question of what other unintended consequences are lurking in this bill because of the rushed process being used to consider and pass it,” one health policy expert told the conservative Daily Signal.

That anger quieted down when Republicans decided not to hold a vote on the AHCA in mid-March. But in the month and a half leading up to Thursday’s successful vote — AHCA passed the House, 217 to 213 — nothing was added to help veterans’ situations.

Roe and other Republicans now say vets are still protected, even without a specific provision in the AHCA bill, because their tax credits are guaranteed by existing IRS rules. “The IRS guidance – which is not changed by the AHCA -— protects veterans’ health care,” Tiffany Haverly, Roe’s press secretary, told Task & Purpose in an email.

Indeed, in 2012, the IRS generated new rules on who would be eligible for insurance tax credits under Obamacare, because the Obamacare bill left a lot to the imagination. Specifically, the IRS’s rules permit vets to draw premium tax credits as long as they’re not getting care in the VA system.

End of story, according to Roe and the GOP: Even if it’s not in the AHCA, vets qualify for insurance tax credits, because the IRS says so.

But critics tell me there’s a big problem with Roe’s reasoning: The 2012 IRS rules were written to specifically address issues of eligibility under Obamacare… and the AHCA repeals Obamacare. That means the IRS rules would be mooted, too, since the law they address would be gone — and new agency rules would need to be written for a new healthcare law.

“It is unclear when or whether that rule would be issued and what options would be available to veterans while they wait for the rulemaking process to be completed,” Rep. Mark Takano, a California Democrat on the House Veteran Affairs Committee, said in a statement Thursday. “These questions could have been addressed if the AHCA had gone through the appropriate process, which would include hearings and a mark-up in the House Committee on Veterans’ Affairs.”

Further complicating the rulemaking process is one of President Donald Trump’s first executive orders, which requires “that for every one new regulation issued, at least two prior regulations be identified for elimination.” Could that be an obstacle to new IRS rules granting vets tax credits? In short, nobody knows.

There’s another question raised by Roe’s reasoning: Why, if existing IRS rules protected vets’ insurance benefits all along, did Republicans bother putting a pro-vet provision in the original AHCA bill to begin with? I posed that question to Haverly, Roe’s press secretary, in a follow-up email. I didn’t get a response.

Roe has been an ardent defender of veterans’ rights and benefits on the Hill. But in this case, he’s also been constrained by partisan politics and the Republicans’ desire to just get Obamacare repeal done.

As a result, we have a typical case of Washingtonitis: Everyone on the Hill, left and right, agrees that vets who don’t use the VA should get health-insurance tax credits, like any other Americans who qualify. But no one’s voting on a bill that guarantees those benefits. Republicans are kicking the can down the road, saying anything they can to get AHCA passed. Democrats are screaming bloody murder to try and stop it.

In the meantime, vets are on the sidelines, getting lots of lovely compliments from their politicians — but no real answers from anyone.