Members of Congress may soon get to vote on a measure that would make it easier for “mentally incompetent” military... 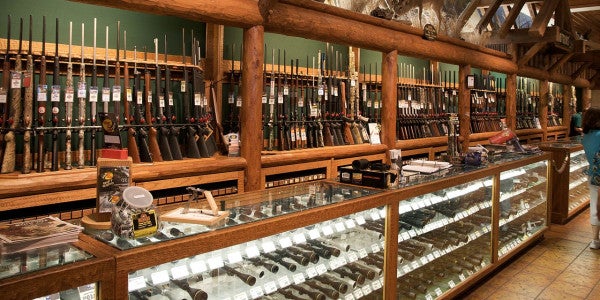 Members of Congress may soon get to vote on a measure that would make it easier for “mentally incompetent” military veterans to purchase firearms on their own — and it's probably a fair idea.

The so-called Veterans 2nd Amendment Protection Act, which sailed through the House Veterans Affairs Committee last week, would let any vet who’s dependent on a fiduciary keep his or her gun-buying rights unless a court officially rules them “a danger to himself or herself or others.” Since the late 1990s, any vet who is deemed unable to manage her own financial affairs and is assigned a fiduciary caretaker by the VA is also reported to the National Instant Criminal Background Check system, which prevents them from buying any firearms.

“The freedoms granted by the Constitution should apply to all Americans — especially the men and women who have been willing to risk their lives to protect those freedoms,” said Rep. Phil Roe (R-Tenn.), the chairman of the committee and the bill’s lead sponsor.

Related: Why Congress Was Right To Strike Down Ban On Mentally Ill People Buying Guns »

A similar bill died in the committee two years ago, but the political dynamics have changed in recent weeks. As I reported last month, Congress has wasted no time in rolling back a December 2016 Obama executive action that barred gun purchases by Social Security recipients who have been deemed mentally ill and need a friend or loved one, known as a “representative payee,” to manage their financial affairs. If you can’t handle your own finances, the Obama administration reasoned, you can’t own and operate a firearm.

Proponents of that change in Social Security Administration rules, including the National Rifle Association, had called it a victory for common sense and fairness. But they didn’t address the Department of Veterans Affairs' similar and longstanding reporting system, in which 167,815 vets’ names have been added to the national no-gun database between 1998 and 2016.

Democrats on the House’s VA panel, however, cited those numbers as evidence that many vets under a fiduciary’s care shouldn’t be allowed to buy guns.

“With more than 20 veterans dying by suicide per day, the vast majority by firearm, today's legislation would make it easier, not harder, for those veterans in crisis to get access to a firearm,” Rep. Elizabeth Esty, a Democrat from Massachusetts on the committee, said, according to Military.com. “This bill would set a nearly impossible standard for the VA to prevent a veteran who is at risk of harming themselves or others from purchasing a gun.”

Esty added that of those 167,000 or so vets on the no-buy list, 19,522 had a diagnosis of schizophrenia; 15,171 had post traumatic stress; 11,084 had dementia; 5,462 had Alzheimer's; and 3,981 had depression. By the VA’s own calculation, 6 of 20 vets who die by suicide received benefits from the department, on average; several dozen academic studies have also determined that the availability of guns is a key factor in suicide rates. The DOD estimated in 2014 that 68% of all military suicides are by firearms, the most common method.

The NRA, however, says it should be up to a judge — and not the VA’s “longstanding and shameful practice” of bureaucratic processing — to determine whether a vet is sane enough to pack a pistol.

“America’s veterans answered the call to serve for the good of all,” the lobby said in a call to action for its members. “Now is your chance to ensure their rights are protected.”

The bill is expected to be amended and marked up before going to a House floor vote later this spring.