On Nov. 14, the Bureau of Alcohol, Tobacco, Firearms and Explosives modified Form 4473 — a piece of government paperwork... 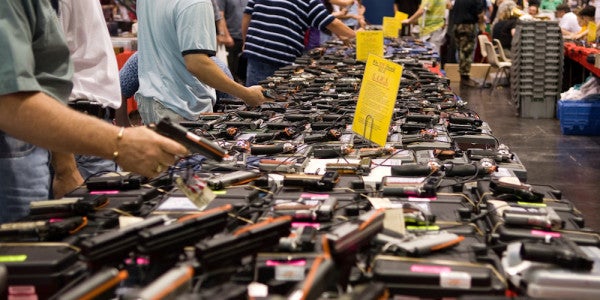 On Nov. 14, the Bureau of Alcohol, Tobacco, Firearms and Explosives modified Form 4473 — a piece of government paperwork required of anyone wishing to exercise his or her right to bear arms under the Second Amendment. One of the little tweaks involved a clarification of question 11e, the one that reads, “Are you an unlawful user of, or addicted to, marijuana or any depressant, stimulant, narcotic drug or any other controlled substance?”

Now, you, me and every man bun-wearing hipster on the planet knows that more than half of the states have legalized the use of marijuana in some capacity or another (29 allow medical marijuana, and eight have legalized recreational use). Which would suggest that the gun-toting, weed-toking denizens of, say, Washington State are well within their rights to check “no” to that question, leaving them free to (a) legally purchase their weapon of choice, (b) pop over to the local dispensary for an ounce of Blueberry Kush, and then (c) head home to blaze up and while away the weekend blowing a bunch of clay pigeons to kingdom come. Like God intended.

But not so fast, sparky. Because the ATF has added a major buzzkill to the form — offering a little more guidance on how to answer this question:

WARNING: The use or possession of marijuana remains unlawful under Federal law regardless of whether it has been legalized or decriminalized for medicinal or recreational purposes in the state where you reside.

The change came after the U.S. Circuit Court of Appeals for the 9th Circuit upheld ATF’s ban on gun sales to marijuana users, noting, that ganja “raises the risk of irrational or unpredictable behavior with which gun use should not be associated.” The court ruled that prohibiting medical marijuana cardholders from purchasing guns does not violate their Second Amendment rights.

What are these guys smoking? I know the government has had it in for marijuana users since the days of “Reefer Madness.” But it’s a new millennium. Pot heads are everywhere, and for some very valid reasons. Cannabis is considered an effective treatment for nausea (which often accompanies cancer therapies), pain, depression, and anxiety, among other things. Not to mention — it gets you high, bro.

The idea that someone who chooses to partake of a botanical substance that is legal in many states and decriminalized in many others should be suddenly ineligible to exercise his right to own and operate a firearm is asinine. What’s the big risk? That somebody’s going to pass out holding a AR-15 and accidentally shoot their flatscreen TV while watching “The Walking Dead”? That he’ll get the munchies and mistake the business end of a SIG Pro semi-automatic pistol for a sugary churro?

The health effects of marijuana are still being studied, but it mostly seems to lead to eating entire sleeves of stale saltine crackers and mild irritation due to breaking open a freshly purchased dime bag and finding it full of stems and seeds. Admittedly, there’s no doubt that actually getting baked impairs your motor coordination (indeed, for some, it’s the whole point). One 2011 meta-analysis showed operating a motor vehicle while under the influence of marijuana was associated with a heightened risk of accidents. All kidding aside, getting stoned and messing around with a firearm is not a smart thing to do. Do not do it. But there’s nothing in the research to suggest that the occasional use of marijuana makes one any less able to handle a weapon.

Meanwhile, you say you’re popping 150mg of Oxy a day? Danny, get your gun. Took a few Ambien and woke up in the neighbor’s kitchen with the remains of an Entenmann’s coffee cake in your beard? What the hell, go get you an AK-47. Taking anti-psychotic meds? As long as you’ve never been declared a danger to yourself or others, blast away, buddy.

And then, of course, there’s old demon alcohol. Any country boy worth a pinch of dip knows the best way to enjoy a little target practice is making your way through half a 30-rack of Natty Ice and setting up the empties on that beat-up husk of a Buick LeSabre out in the side yard. Then again, a 2013 study of firearm-related homicides revealed that 48% of the killers were reportedly under the influence of alcohol.

We think we know the problem: Despite the wave of decriminalization sweeping the country, pot heads still have a bad rap. They’re considered lazy, weak, poorly groomed, and even un-American. As the legendary Merle Haggard once put it, “We don’t smoke marijuana in Muskogee.” Of course, that was before old Merle started growing his own medicinal herb, recorded “It’s All Going to Pot” with Willie Nelson, and marketed his own weed strain. Times change.

To some, it may seem surprising that a pot smoker would even want to buy a gun, given the drug’s association with a chilled-out mellow vibe. But even space cadets have constitutional rights. And if we let the ATF get away with turning down stoners, what’s to stop them from adding other dangerous substances to the no-buy list, like say, whiskey, or steroids, or pork rinds?

Of course, the ATF’s decision places a particular burden on veterans suffering from post-traumatic stress disorder, many of whom have found marijuana to be a highly effective treatment. Although the VA’s National Center for PTSD does not recommend it, some veterans treatment programs do prescribe it.

So how does someone get around the prohibition? Well, in many states, it's perfectly legal to sell guns out of the trunk of your car to just about anyone, without recording serial numbers or doing a background check. If you prefer to buy from a registered gun shop, though, you’ll have to lie on the form, as long as you're cool with committing a felony offense punishable by up to five years in prison.

Because until the ATF decides to pop their heads out of their own asses, fire up a doobie and chill the hell out, you're going to be on the wrong side of the law.