Why Is The VA Buying Guns And Tactical Equipment? 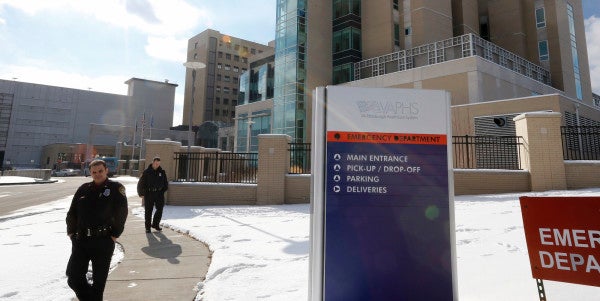 The Department of Veterans Affairs bought more than $11 million worth of weapons, ammo and other security equipment between 2005 and 2014, according to a report released last month by a nonprofit organization that tracks spending across the federal government.

The $11.6 million in weapons and gear includes $200,000 for night vision equipment, $2.3 million on body armor, more than $2 million on pistols and about $3.6 million on ammunition, the report said. A chart included with the report also shows a variety of training weapons and a night gun scope.

The VA didn't respond to Military.com's request for comment, though in a Feb. 17 email to OpenTheBooks, the agency described its police officers as “the front line response forces for our facilities” and said its personnel “receive extensive training in active threat response.

“While VA police work very closely with Federal, local and state law enforcement partners, VA police will be the first to have to deal with any active situation and are well trained accordingly,” it stated.

The department is not the only federal agency that has been stockpiling weapons in recent years, presumably against mass shooters and other security threats. The report found that non-military federal agencies spent nearly $1.5 billion on weapons and ammo from 2005 to 2014.

The report states that the IRS spent $10.7 million on guns, ammo and gear over the same period. The Animal and Plant Health Inspection Service spent $4.7 million, the Social Security Administration $417,000, and the Department of Education $412,000. The Smithsonian Institution's arms purchases totaled just over $309,000.

The arming of VA security personnel began in 1996 with a pilot program intended to extend firearms and arrest authority to the department's 2,393 officers, the report said. Two years later, only 262 department police officers had the authority to carry a weapon and make arrests.

“However, by 2008, the VA officer corps grew to 3,175 and all were authorized to make arrests and carry firearms,” OpenTheBooks' report found. Currently, it said, the VA has more than 3,700 personnel who may carry firearms and make arrests.

In a swipe at VA over its widely publicized problems with getting veterans in for appointments, the organization said it was “notable buildup occurred while the VA failed to provide critical care for thousands of veterans who would later on waiting lists.”

In its email to the group, the department said the gun purchases relate to a decision in 2008 to have VA police switch to a different firearm. It did not say what VA officers used before then.

“This change has taken place over time in a phased approach. VA facilities began replacing the older pistol as funds became available and pistol service life limits are reached,” the VA said. “Most of VA facilities have completed the transition to the new contracted firearm, with several still in that process.”

Night vision and other countermeasure equipment were acquired by field facilities to meet their local security and law enforcement needs, according to the department. The VA statement did not detail which facilities required the special gear.