Marines Show How To Dominate At 3-Gun Shooting

Sprinting past obstacles and unloading on targets with a high-powered rifle is fun — though police calling afterward isn’t —... 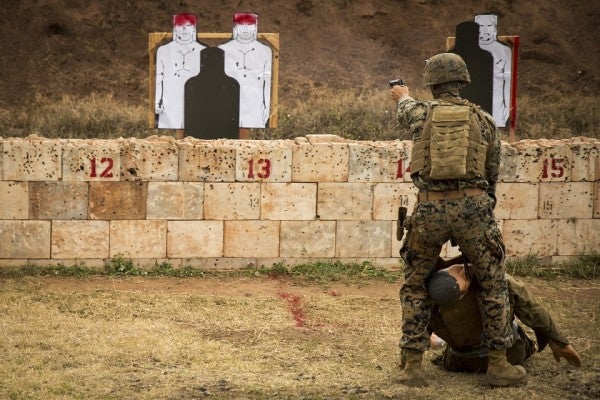 Sprinting past obstacles and unloading on targets with a high-powered rifle is fun — though police calling afterward isn’t — but what’s better than one weapon? A second one, how about a pistol, and, hey, screw it, let’s throw in a shotgun, too.

That’s three-gun shooting in a nutshell. It involves multiple firearms, fast-paced movement across a range littered with barriers, and an array of targets that must be hit in a limited period of time.

It takes an incredible amount of concentration, skill, and accuracy, which is why Task & Purpose reached out to a pro to find out how to dominate at three-gun shooting.

A head coach, instructor, and competitor on the Marine Corps action shooting team, Staff Sgt. Martin Lucero lays out how three-gun shooting works, what you need to remember when you’re doing it, and all the finer points on how to decimate a host of targets in a matter of minutes, if not seconds.

The action shooting team participates in national, international, and interservice three-gun competitions. The team was founded in 2005 as an experimental unit tasked with validating marksmanship tactics and doctrine and was limited to infantry Marines. Since then it has expanded to include shooters from a range of specialties.

A Marine fires an M9 service pistol at targets from an elevated platform during a course of fire on the Kaneohe Bay Range Training Facility aboard Marine Corps Base Hawaii, March 17, 2016.U.S. Marine Corps photo by Sgt. Matthew J. Bragg

No range is ever the same.

The weapons used vary from match to match, with the size of the range anywhere between a few meters to as many as 650 meters for rifle targets. A match will typically have between five and 10 stages, each one with their own course of fire. There will be a number of different targets: There’s steel, which you have to hit and “ding” or knock over to score; clay targets, which must be broken; and paper targets, in which a shooter needs to land a kill shot or two body shots on a silhouette target to score.

“No two stages will ever be the same,” says Lucero, who has been on the action shooting team for just over a year. “You might start with a rifle in your hand, and pistol loaded and holstered, and the shotgun placed somewhere on the range.”

A stage that lasts 30 seconds may be just 25 meters wide and 25 meters deep, while one that lasts three minutes will involve sprinting to cover, transitioning from a pistol to a rifle, or vice versa, before picking up a shotgun and proceeding to a new area.

Lance Cpl. Andrew Caudill runs with ammunition cans to the next stage in a course of fire during the Pacific Combat Shooting Match on the Kaneohe Bay Range Training Facility aboard Marine Corps Base Hawaii, March 16, 2016.U.S. Marine Corps photo by Sgt. Matthew J. Bragg

According to Lucero, the Marine Corps bases its ranges off award citations for valor, similar to how the final events in the Crucible are laid out. For example, one stage may have you shooting off-hand with a pistol, while another will have you carrying an ammo can, or dragging a mannequin to simulate a casualty, as you move through the course. For Marine Corps matches, the shooters typically wear their flak and kevlar.

The key here is that it’s always different, which means preparation counts for less. What matters are the fundamentals.

It’s all about muscle memory.

“You hear that buzzer go off and it’s a mind eraser and you’ve got to act,” says Lucero. “You fall back on the basics. In training, you can push your times out. Everyone knows when you’re on the range training, your fastest times aren’t going to be the time you put up in a competition. Now there’s pressure, people are watching, there’s stressors, and you fall back on your muscle memory.”

At each stage, before the shooters begin their course of fire, they have a few minutes to scope out the range, come up with a plan and decide where they’ll move to, what targets should be engaged first, and when and where to reload.

But that preparation can go out the window in a split second.

“As soon as you start running that stage and you miss a few shots, it changes your whole plan and you’re back to your basics of shooting and hitting the target,” Lucero explains.

You can’t lose your composure.

“First thing on your mind obviously is safety,” says Lucero. “You don’t want to do anything to get anyone hurt, but for me, being a shooter for the United States Marine Corps, I’m in the spotlight. I’m representing the Marine Corps, so I’m not going to go out there and act like a fool. If I start missing targets I’m not going to come off the stage and pout like a lot of these civilians do and leave the stage all butt-hurt, cursing and screaming.”

Instead, each miss and mistake is an opportunity to learn, says Lucero.

“Since I’m wearing the Marine Corps jersey, I come off the stage and start thinking, if I did mess up what do I need to fix, or if it went well, what did a do right and did I push my limits or could I have cut time somewhere else,” says Lucero.

There’s a real value in giving Marines, and other service members, a chance to test out techniques in a one-sided firefight, where an error results in a low score, not a tragedy. This way, lessons about what works, and what doesn’t, can make their way to the broader Marine Corps when a shooter leaves the unit.