Smashing the patriarchy isn’t as simple as flipping a switch. It’s a painstaking, persistent process of challenging the myriad ways... 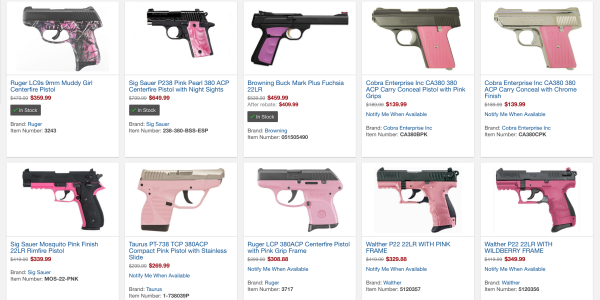 Smashing the patriarchy isn’t as simple as flipping a switch. It’s a painstaking, persistent process of challenging the myriad ways society puts women in a box. Everyone has a role to play in the struggle, from equal pay for equal work to less lofty, but equally vital, gender-equity objectives.

I have one such objective. I want an end to pink guns.

No one’s going to accuse firearms culture of progressive feminism. It’s a hidebound, man-run, dick-measuring society unto itself, and being in possession of a penis and a Ruger Mini-14, I’ve always been a little more okay with that than I should be. But you have to take a stand for your values. And the way we begin to have a more inclusive gun culture is by liberating women from the pink ghetto of their Cabela’s and Walmart sporting goods sections.

Manufacturers of guns and gun do-dads think there’s some critical segment of womankind they absolutely can’t reach unless they cute-ify their weaponry. So you get pink PPKs, pink .45s (but chambered in .22, you know, for a woman), woodland pink shotguns, pink ear protectors, hot-pink heart shooting targets, pink holsters, and, of course, the Hello Kitty AR-15.

In so doing, the industry is basically reifying an ossified construction of gender identity. That’s fancy talk for “If you wanna be a gun chick, you’ll love this pink gun, because you’re a chick.”

I’m not alone on this: Even the most die-hard gun enthusiasts have their issues with pink pistols, too. “Pink guns are just a marketing ploy to raise the demographic profile of women in the NRA,” writes Newsmax’s Alana Marie Burke. Firearms enthusiast and blogger Suzanne Wiley tells women that pink guns are a canard at best: “When looking to buy your first gun for personal defense, make your choice on what fits you best, not what color matches the majority of your outfits.” And Ben Shotzberger of The Truth About Guns recounted his qualms at a Pennsylvania gun shop when when two kids, who’d been drilled in firearms safety by their dad, started playing with a pink gun as if it was a toy.

Even YouTube’s Yankee Marshal, the ubiquitous and gleeful video gunsplainer, has some deep-seated issues with the pink-gun movement. “Guns aren’t toys,” he says, “And when you start coloring them like toys, some people are going to treat them like toys.”

So everyone agrees there are potential safety issues here, and they boil down to this: Pink’s not really a serious color, so people might not take pink guns seriously. What the hell does that say about the women to whom these unserious weapons are being marketed?

This actually speaks to a larger problem in gun culture: Firearms and outdoor corporations have fused their products and their brands to “traditional” values, personified by figureheads like the Duck Dynasty boys. Functional tools are supplanted by an acquisitive fetish for the right status objects. And campsites and makeshift ranges get plastered with more stickers than the bumper of Jimmie Johnson’s Chevy. Why bother actually hunting, mudding, or shooting when you can signal your bubba virtues with Salt Life, Yeti, and Browning window decals?

Please don't let this be a thing.

In this culture obsessed with status objects, pink guns become an “acceptable” entry point for your moms and girlfriends and sisters. A lot of them may be okay with that, because they think pink is pretty. But is their pink-thinking the result of serious contemplation, or our society’s reflexive gender norms?

You’ll never know until we smash the norm. Ban pink guns. Women deserve black parkerized Barretts and so, so much more.