Happy St. Patrick’s Day! Here’s a story about Sean Hannity getting his Irish up. First, the facts. Hannity, the ubiquitous... 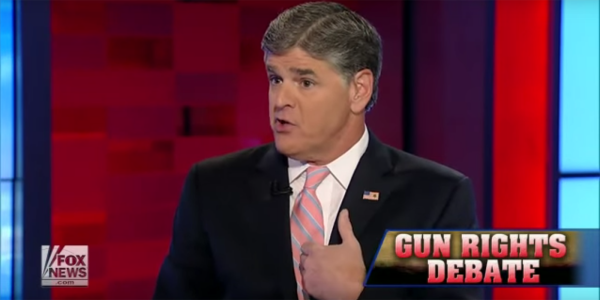 Happy St. Patrick’s Day! Here’s a story about Sean Hannity getting his Irish up.

First, the facts. Hannity, the ubiquitous conservative TV host and Trump-fluffer, loves guns. Which, hey, so do I. He has a license to carry. Me too! Also, he pulled a gun on his liberal colleague, Juan Williams, on the set of their TV show. Me… not so much.

…Hannity's version of entertainment can go too far. Last year, after ending one of his many spirited on-air arguments with liberal contributor Juan Williams, Hannity pulled out a gun and pointed it directly at Williams, according to three sources with knowledge of the incident. He even turned on the laser sight, causing a red dot to bob around on Williams' body. (Hannity was just showing off, the sources said, but the unforeseen off-camera antic clearly disturbed Williams and others on set.)

For the record: Hannity's colleagues brought the Williams incident to the attention of Fox News executives, though it's not clear whether anything came of it.

Hannity, in a statement released through Fox News Channel, says, sure, yeah, I whipped out my piece, but you’ve got it all wrong:

“While discussing the issue of firearms, I showed my good friend Juan Williams my unloaded firearm in a professional and safe manner for educational purposes only,” Hannity’s statement read. “Every precautionary procedure that I have been trained in since the age of 11 was followed. I’ve had a concealed carry permit in five states for all of my adult life. Any other interpretation of this is outright false reporting.”

Williams also released a statement, also through Fox News, saying the gunplay incident was “sensationalized,” and he and Hannity “continue to be good friends.”

(1/2) This incident is being sensationalized – everything was under total control throughout and I never felt like I was put in harm’s way.

So, even though he didn’t address the reported aiming of the weapon at a person, or the reported activation of a laser sight, let’s give Hannity the benefit of the doubt over Byers’ three witnesses, since our legal system basically gives the benefit of the doubt to the armed white guy anyway. His story is that, in a crowded television studio in Midtown Manhattan, after an adversarial on-air segment, he just happened to pull out his weapon from where it was concealed, unprompted, “in a professional and safe manner for educational purposes only.”

When I exercise my license to carry, I typically carry a short-barrel Smith & Wesson Model 19 loaded with .357 Magnum Hydra Shok. (Yes, it's heavy, big, and a revolver. Call me old school.) Mine is a concealed weapons permit. I keep my weapon concealed at all times, even though my state has basically decriminalized brandishing a gun and firing “warning shots,” because only irresponsible lunatics with no gunsense brandish their weapons and fire warning shots.

I never took out my concealed firearm, unloaded it, and “showed” it to a good friend, even at my friends’ occasional prompting. I tend not to let friends know when I’m carrying, period. My weapon is my property, and my responsibility. Impromptu, hands-on firearms familiarization in a workplace is kind of stupid. A few years ago, it was also begging for handcuffs.

Hannity is a big-ass baby who, even by his own generous and weirdly vague account, treats his firearm like an exciting toy rather than a lethal tool that he’s responsible for maintaining safely. He’s exactly the kind of gun owner who makes it hard for the rest of us gun owners to convince everyone we’re sane and safe. You own a gun, you have a responsibility to yourself and everyone around you to act like a goddamn adult who can posit causes and effects.

Most of America’s estimated 55 million armed citizens get that, and were raised like that. But most of us don’t get to be the public face of our national gun culture. That’s left to wingnuts like Hannity and the other miserable gun-gear fetishizing twits like him, the tactical wannabes who moan at the gun range about all these damn rules. The kind of boobs who, when they act like children in possession of power tools, can have their employer’s PR shop write up saccharine statements in their names about their “professional and safe” workplace show-and-tell.

Mind you, all this is what you’re left with if you give Hannity the benefit of the doubt. If he did pull his concealed gun out, point it at Williams, and paint him with a laser, well, the man’s a criminal, not a Second Amendment hero. Real gun people recognize the difference. It’s time they defended that difference aloud, rather than letting dim man-children like Hannity be their spokesmen.