A pet squirrel is being hailed a hero after risking his life to stop a burglary. The squirrel’s name is... 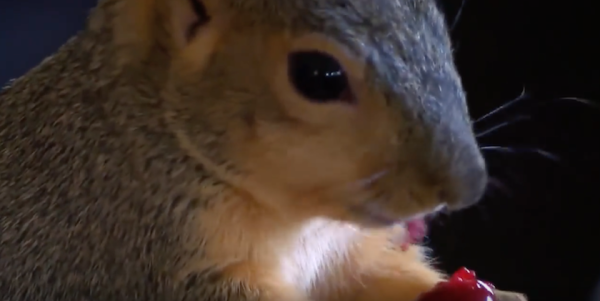 A pet squirrel is being hailed a hero after risking his life to stop a burglary. The squirrel’s name is Joey, and, yeah, he’s pretty damn cute. But don’t confuse his cuteness for kindness. Someone did, and paid the price.

Joey belongs to Adam Pearl of Meridian, Idaho, who recently arrived home to discover that someone had been trying to break into his gun safe.

“I started looking at it and saw the scratches that are around the locking area and at that point I knew somebody was definitely in here messing around,” Pearl told a local ABC News affiliate.

Pearl knew exactly what he needed to do: Call the police.

When officer Ashley Turner arrived at the crime scene, she was understandably surprised to see Joey scampering around willy-nilly. Squirrels are wild rodents who live in the trees and eat nuts. But Joey doesn’t just eat nuts. He is nuts.

“During her investigations, Joey had run in the bedroom just screwing around like he always does between her legs and kind of startled her,” Pearl said. “She says, ‘Who, what was that?’ And I said, ‘Ahhh, don’t worry about that, that’s just Joey, my pet squirrel, ya know.’”

If Joey could speak, certainly he would’ve recounted the epic battle that had just unfolded in Pearl’s bedroom. Who would’ve guessed that moments before he had fought a full-grown human man to protect his master’s precious gun collection?

The story only came to light after Turner found the suspect. There were scratch marks all over his greedy hands. Turner recalled a conversation she had just had with Pearl. “Does Joey bite?” she had asked. Pearl’s reply: “Well, he usually doesn’t bite, but you never know, ‘cause he is a squirrel.”

Turner then pointed to the suspect’s hands. Pearl explained what happened next: “She asked him, ‘did you get that from the squirrel?’ And he says, ‘Yeah, damn thing kept attacking me and wouldn’t stop until I left.’”