For every professional football player, there is no day of the year more important than Super Bowl Sunday. There’s not... 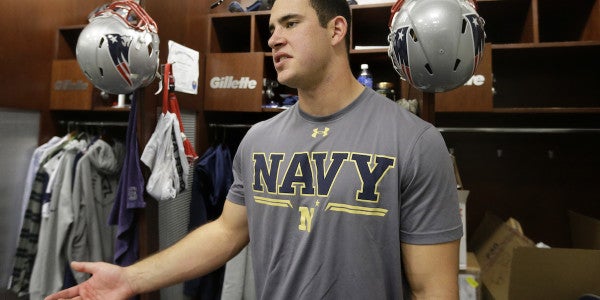 For every professional football player, there is no day of the year more important than Super Bowl Sunday. There’s not a player in the NFL who’d ever pass up the opportunity to play in the championship game. But New England Patriots long snapper Joe Cardona almost didn’t have a choice.

The second-year member of the team is also a U.S. Navy reservist and was scheduled to drill this weekend in Newport, Rhode Island.

“I had to reschedule it,” Cardona said in an interview with Yahoo News.

He’s lucky his commander gave him a pass.

Cardona graduated from the U.S. Naval Academy in 2015, and shortly after, he was drafted by the New England Patriots as a fifth-round NFL pick. During Cardona’s first year on the team, he played while still on active duty. He worked full time at the Naval Preparatory Academy in Newport, and then drove to practice in the evenings — an hour commute each way.

“The way he handled two jobs just showed a lot of maturity and that can instill a lot of confidence when you’re working with someone like that,” punter Ryan Allen told Yahoo News.

“Joe represents everything that we want to stand for,” he said at a news conference, “and he’s a great person and of course his real job, defending our freedom, is at the very top of the list.”

Belichick himself has deep ties to the Naval Academy. His late father, Steve, was a World War II veteran who coached football for more than three decades at the academy. There’s even a library at the school named after him where a collection of his historic football books is preserved, according to ESPN.

As for Cardona, I guess the Super Bowl is a pretty good reason for him to get out of drill weekend… but only if the Patriots win.