Russian Kids Can Grow Up Reading This Military Children’s Book

While America’s children are setting fires in the streets and burning calories on Bluetooth-enabled exercycles, Russian toddlers are getting schooled in … Continued 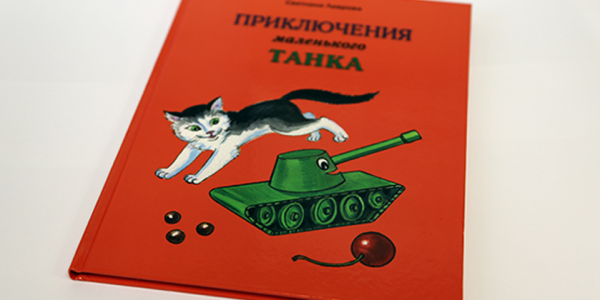 While America’s children are setting fires in the streets and burning calories on Bluetooth-enabled exercycles, Russian toddlers are getting schooled in the nation’s military arsenal.

Uralvagonzavod, the manufacturer of the Russian T90 battle tank, has gotten into the children’s book market with “The Adventures of the Little Tank,” a picture book that was the brainchild of the company’s executive director, Vladimir Roshupkin.

Written and illustrated by Svetlana Lavrova, the book is set in the defense contractor’s corporate museum, where the title character, a toy tank, has been left behind by a visitor. Overnight, the museum’s armored combat vehicles come to life, and regale the little fellow with tales of their adventures in various global conflicts. One old vet, for instance, fondly recalls his service in the deserts of India.

According to the company’s website, the book also has “an interactive page with puzzles, coloring books and labyrinths, where young readers will be able to feel part of the adventure.”

It adds that the project’s goal is to “instill a sense of patriotism and pride for the country.”

Good for them. Of course, American kids learn all about tanks, too, right?