Mattis Is Right. Here’s Why NATO Is Not Obsolete

Whatever President-elect Donald Trump may say, NATO is not obsolete. For the thousand or so years before the formation of... 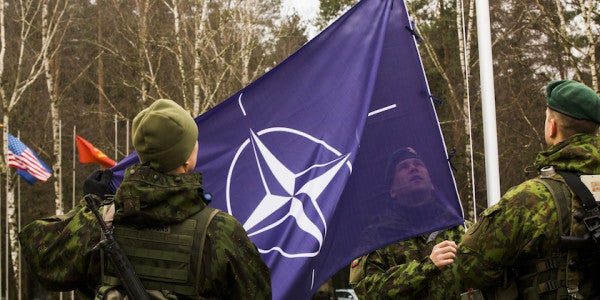 Whatever President-elect Donald Trump may say, NATO is not obsolete.

For the thousand or so years before the formation of the North Atlantic Treaty Organization, Europe was the most violent killing ground the world had ever seen. From the fall of the Roman Empire, to the continuous conflicts between small city states and formative nation-states, through the Hundred Years War, the Napoleonic Wars, the First World War, and World War II, a hundred million or more Europeans were killed, and perhaps a billion wounded, injured or displaced — not to mention a million plus American dead, missing and wounded in the most recent conflicts.

And then, with the formation of NATO in 1949, it all stopped. Nearly three-quarters of a century have passed with almost no bloodshed at all — and the violence that did occur was at a scale much smaller than Europe had routinely seen in the past.

Only two significant exceptions have occurred since 1949, both of which demonstrate the capacity of NATO rather than its limits. The first was the 1974 Turkish occupation of northern Cyprus, and the continued presence of Turkish troops on an ethnically Greek but sovereign state — precisely the kind of conflict that in other centuries might have led to much larger war. (Consider the Crimean War, for instance, best known to many through the poem “The Charge of the Light Brigade.”)

In the second case, the breakup of the former Yugoslavia in the late 1990s saw NATO step in to Kosovo, to prevent a local civil war from spilling over into a larger regional conflict, and, not coincidentally, greatly reduced (though by no means completely prevented) the kind of civilian slaughter that was the hallmark of European conflict for so long.

Before World War II, when Europe faced an existential crisis of collective security, British Prime Minister Neville Chamberlain signalled his own unwillingness to commit to defend friendly nations on the continent.

“How horrible, fantastic, incredible it is that we should be digging trenches and trying on gas-masks here because of a quarrel in a far away country between people of whom we know nothing,” Chamberlain famously said. Winston Churchill later excoriated Chamberlain’s attitude toward Nazi Germany by saying that an appeaser “hopes that if he feeds the crocodile enough, the crocodile will eat him last.”

The president-elect is quite right to point out that NATO has yet to develop a coherent, continent-wide or indeed North Atlantic-wide strategy to combat terrorism as a threat to all its members. And he is also accurate when he notes that many members fail to meet their obligations regarding defense spending. Poland, Turkey, France, Germany and Italy all contribute less than the 2% of GDP that is expected.

But these flaws do not make NATO obsolete. On the contrary, they show that NATO needs strengthening and renewal, not disparagement.

The fact that genocide was again attempted in Europe less than 20 years ago during the breakup of Yugoslavia, and that the genocide was curtailed and eventually halted by NATO, shows that the organization is far from obsolete.

Collective security requires that potential adversaries believe that those who have promised support to one another mean it.

When the Soviet Union collapsed in 1991, many former Soviet republics found themselves with various Soviet military assets on their territory. While some were returned to Russia immediately, others, such as nuclear weapons in Ukraine, had a more ambiguous status. Ukraine took advantage of the presence of these weapons to seek and receive security assurances from the West. Unfortunately, in a legal sense, a security “assurance” is a much weaker obligation than a “guarantee.”

When Russia effectively annexed portions of Ukraine in 2014, it did so correctly assessing that the United States and Europe would have little stomach to fight for Crimea, and that the “assurances” offered by the West would amount to little. It was a catastrophe for Ukraine and a black eye for the West.

Unidentified gunmen on patrol at Simferopol Airport in Ukraine's Crimea peninsula. The AK-74 carried by the rifleman on the right does not have a magazine inserted.Voice of America photograph.

The North Atlantic Treaty depends upon prospective enemies perceiving that all member states will honor their obligations under Article 5, which says that “ an armed attack against one or more of them in Europe or North America shall be considered an attack against them all.” A perception now that the North Atlantic Treaty might have little more weight than the security assurances to Ukraine, a perfect example of Chamberlain’s “people about whom we know nothing,” could lead to a serious miscalculation if Trump is merely being bombastic, never mind if he is being serious.

Trump’s use of the word “obsolete” is not the first time he has given European allies indigestion about NATO. In an interview with the New York Times in July, he couched his desire for other members to pay more for defense in language that reportedly stunned world leaders. When the Times’ David Sanger asked if “the members of NATO, including the new members in the Baltics,” could count on the United States to support them if attacked by Russia — in other words, would the U.S. fulfill its obligations? — then-candidate Trump equivocated. “Have they fulfilled their obligations to us?” he asked. “If they fulfill their obligations to us, the answer is yes.”

When the president of the United States casually suggests a conditional level of support for allies, he calls into serious question the likelihood that the United States will honor its obligations. Even as Trump backpedals from the particular word obsolete, and restricts its usage to collective security against terrorism, he undermines the most important thing about NATO, its hitherto unambiguous commitment to each of its members. Equivocation, even accidental, unintentional equivocation, can have deadly consequences.

The House and Senate can quickly shore up some of the damage and send its own statement of unambiguous commitment to NATO by approving a change to the National Security Act of 1947 that would make retired Marine Gen. James Mattis eligible to serve as Secretary of Defense. Mattis knows NATO well.

“NATO, from my perspective, and I served once as the NATO alliance supreme allied commander, is the most successful military alliance in modern world history, maybe ever,” Mattis said in a hearing before the Senate Armed Services committee last week.

The presence of Mattis in Trump’s cabinet should reassure allies and enemies alike that the United States will not merely honor its treaty obligations, but will bear the burdens necessary to maintain peace in what had until recently been a horrific battlefield for all of recorded history.

Trump, for his part, is not wrong to observe that NATO has work to do. Perhaps he believes his remarks are just a tactic to get Europe to take notice. But calling the commitment of the U.S. to NATO into question is exactly the wrong way to make NATO a stronger force against either terrorists or Russia. Preparing for defense takes time, while taking advantage of weakness can be quick work.

Trump said in London today that NATO is still “very important.” It would be nice if he could keep saying it, and with the same kind of conviction he brings to his criticisms of the alliance.