On Tuesday, Russian Foreign Minister Sergey Lavrov called out Defense Secretary Jim Mattis for being “unprofessional” after he stood by... 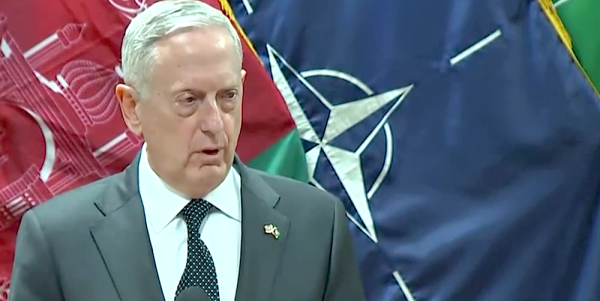 On Tuesday, Russian Foreign Minister Sergey Lavrov called out Defense Secretary Jim Mattis for being “unprofessional” after he stood by a U.S. general that claimed Russia may be providing weapons to the Taliban in Afghanistan.

“These are unprofessional declarations based on nothing,” Lavrov told TASS, a Russian news wire. “No matter what negativity might be hurled at Russia now, not a single piece of evidence to these assertions has been offered.”

On Monday, Mattis made an unannounced visit to Afghanistan to assess the state of the 16-year-old war on the heels of a major Taliban attack that claimed 140 Afghan National Defense Security Forces troops. And he was present during a press briefing when Army Gen. John Nicholson, commander of U.S. Forces-Afghanistan and the NATO Resolute Support mission, refused to deny reports that Russia is supplying arms to Taliban insurgents, according to Military.com.

ABC News reports that an anonymous U.S. military official led reporters in Kabul to believe that Russia is providing guns and other small arms to the Taliban across the Helmand, Kandahar, and Uruzgan provinces of Afghanistan. And though Mattis did not directly specify that Russia was dealing to the Taliban, he implied as much.

“We're going to have to confront Russia where what they're doing is contrary to international law or denying the sovereignty of other countries,” he said. “For example, any weapons being funneled here from a foreign country would be a violation of international law unless they were coming to the government of Afghanistan,” Mattis said during the briefing.

Lavrov alleged Wednesday that this is just a ruse. “I consider it to be an attempt to divert attention from some plots concerning the Syrian issue,” he said. “Our suspicion in this regard has been growing lately.”

The Pentagon has yet to respond to Lavrov’s comments, but if we could make a suggestion: keep your knifehand strong, Mattis.