The Department of Defense vastly overstated the number of active-duty military personnel deployed to Texas and Louisiana in response to... 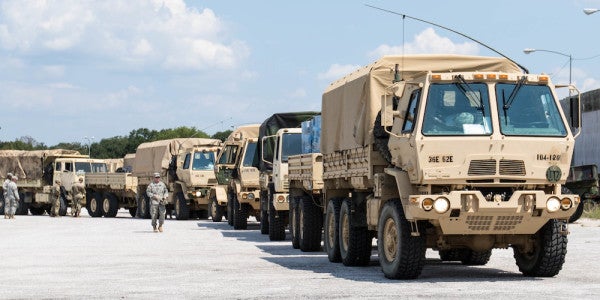 The Department of Defense vastly overstated the number of active-duty military personnel deployed to Texas and Louisiana in response to the catastrophic rain and flooding of Hurricane Harvey, the Pentagon told CNN in a statement on Sept. 1, with just a quarter of initial estimates actually sent to the Gulf Coast as part of relief efforts.

On Aug. 31, the U.S. Northern Command stated that 6,300 active-duty service members had been dispatched to bolster Texas's 12,000-strong National Guardsmen and reserve forces from neighboring states currently assisting civilian disaster response organizations with ongoing Harvey relief, evacuation, and search and rescue efforts. But the DoD told CNN on Sept. 1 that that active-duty personnel actually numbered closer to 1,638 as that morning.

“There was an accounting error in the numbers that were provided yesterday,” Pentagon spokesman Lt. Col. Jamie Davis told CNN in a Sept. 1 statement. “In a fast-moving response such as this, some people were inadvertently double-counted on a spreadsheet. We have corrected our process to ensure this doesn't happen again.”

It's understandable, sure. Anyone who's spent hours staring at Microsoft Excel knows that spreadsheets are the twisted cousin of the much-abused great Satan that is the PowerPoint, the cause of calamities from billions in business losses to accidental wiretaps.

NORTHCOM emphasized that the error ” lessen the impact of our response,” a response that included 73 helicopters, three C-130 Hercules aircraft, and eight pararescue teams. According to CNN, that active-duty personnel had rescued more than 1,200 since Aug. 30 — the same day the National Guard announced some 4,200 (and 300 pets) pulled from the flood waters.

But the error, even if accidental, comes at a weird time for the DoD's accounting of troops numbers. On Aug. 29, the Pentagon “revealed” that the number U.S. troops in Afghanistan totaled closer to 11,000 rather than the previously-touted number of 8,400, a figure designed to reflect not the number of troops committed to an enduring mission, but the Defense Manpower Data Center count of actual warm bodies. Though the new troop level doesn't indicate an actual rise in combat troops fighting in the country, the DoD' opaque explanation for the change likely planted seeds of confusion among an electorate exhausted by 16 years of seemingly endless war.

While the NORTHCOM slip-up may have been an accident, its proximity to the Afghan troop discussion may be enough to make the average citizen anxious about how the Pentagon discusses troop levels. And the fate of the War in Afghanistan — and disaster relief — shouldn't rise and fall at the whims of Microsoft Excel.