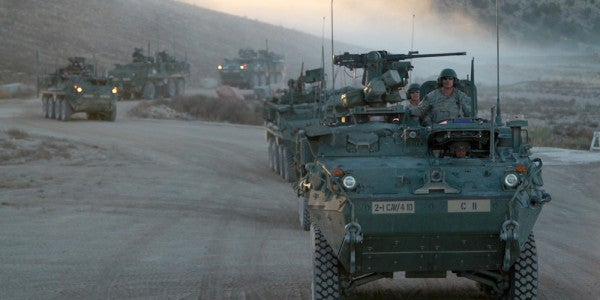 The two brigades will replace the 4th Brigade Combat Team, 25th Infantry Division and 1st Infantry Brigade Combat Team, 82nd Airborne Division respectively, according to the Army. While the new soldiers will likely arrive at the beginning of the 2018 fighting season as relief for existing combat troops, the Army said that the deployments regular troop rotation as part of Operation Freedom's Sentinel.

As a result, the two deployments are unlikely to dramatically impact existing troop levels despite the Department of Defense’s plan to increase the existing U.S. military presence in Afghanistan to as high as 18,000 troops in 2018. Indeed, the 2,2000 Fort Bragg-based 1st IBCT soldiers who the 2nd IBCT will replace in spring 2018 were quietly deployed in September 2017 as the first leg of the troop surge described by President Donald Trump in an August address on the future of the U.S. war in Afghanistan. As of Nov. 27, there are currently 15,298 U.S. combat troops in Afghanistan, according to the Defense Manpower Data Center.

The planned troop deployments also come amid a major push to position Afghan security forces to take over the bulk of counterterrorism operations: As U.S. warplanes continue to pummel militants across the country (dropping the most munitions on terror targets in August 2017 since the same month in 2012), the Army announced in October that the branch would accelerate the fielding of the security force assistance brigades to put the new elements of the branch’s “advise and assist” mission downrange by 2018 instead of 2022; on Dec. 8, the branch announced the activation of a second brigade at Fort Bragg for January 2018.

Related: The DoD Is Sending More Troops To Afghanistan Than Previously Announced »

U.S. special operations forces have played an essential role in restoring stability to Afghanistan's security environment. According to a biannual DoD report to Congress released in December, U.S. Joint Special Operations Task Force-Afghanistan conducted 2,175 ground operations over six months between June and November “in which they enabled or advised” Afghanistan’s own outstanding special operations personnel.

“The 2nd Infantry Brigade Combat Team of the 4th Infantry Division has a proud deployment history in support of operations in Afghanistan,” said 2nd IBCT commander Col. David Zinn in a statement. “Our War Horse soldiers are trained, ready, and are honored that the Army has selected our unit for the deployment.”

“Our formation of soldiers are fit, inspired, disciplined, and trained,” ist SBCT commander Monté L. Rone said. “We couldn't do this without our families and owe special thanks for their willingness to stand by our most precious resource – The American Soldier.”