The Pentagon has identified the two soldiers killed in southern Afghanistan earlier this week as members of the 82nd Airborne... 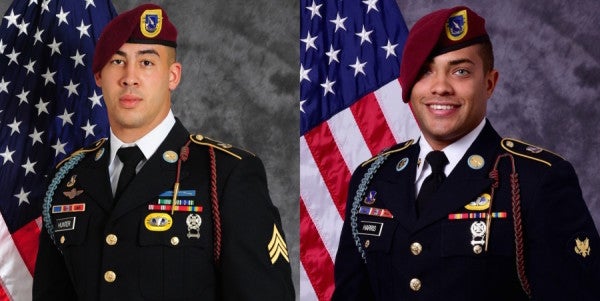 The Pentagon has identified the two soldiers killed in southern Afghanistan earlier this week as members of the 82nd Airborne Division.

The Fort Bragg-based soldiers were part of the 1st Brigade Combat Team, deployed in support of the Resolute Support Mission to train, advise and assist Afghan forces.

The soldiers were part of a convoy that was attacked south of Kandahar on Wednesday afternoon, according to officials. Four other soldiers were wounded in the attack, which involved a vehicle-borne improvised explosive device.

NATO officials in Afghanistan said the four wounded soldiers were receiving care at a coalition medical facility and that their injuries were not considered life-threatening.

“On behalf of the men and women of the Resolute Support Mission, I offer our deepest condolences to the families of our fallen comrades,” said Gen. John Nicholson, the top U.S. military officer in Afghanistan and a former commanding general of the 82nd Airborne Division. “These soldiers gave their lives in service of a mission that is critically important to the United States, our allies and partners. We will honor their sacrifice with our dedication to protect our homeland and complete the mission for which they sacrificed.”

The Department of Defense announced the names of the two soldiers killed in the attack late Thursday.

The Taliban has claimed responsibility for the attack that killed Harris and Hunter.

On Thursday, a separate attack killed another coalition soldier and injured six other personnel during a patrol near Kabul, officials said. The wounded were reported in stable condition at the U.S. military hospital at Bagram Airfield.

The patrol was struck by an IED during a partnered mission alongside Afghan soldiers.

There are about 15,500 coalition troops in Afghanistan in support of the 16-year-old war. About 8,400 of them are from the U.S. military, with more than 2,000 of that number hailing from Fort Bragg.

The 1st Brigade Combat Team alone has approximately 1,500 soldiers in Afghanistan, with troops in Kabul, Kandahar and other parts of the country. Most of the soldiers deployed in June, led by Col. Tobin Magsig and Command Sgt. Maj. Robert Cobb.

The soldiers have a variety of missions providing base security, protecting high-ranking military and government officials, serving as Theater Reserve Forces and training, advising and assisting Afghan security forces.

Harris and Hunter’s battalion, the 2nd Battalion, 504th Parachute Infantry Regiment, has been tasked with overseeing security for a tactical base in southern Afghanistan and serving as a quick reaction force to deal with nearby attacks.

“The entire Devil Brigade is deeply saddened by the loss of two beloved team members,” Magsig, the brigade commander, said in a statement released Thursday.

“Spc. Christopher Harris was an extraordinary young man and a phenomenal paratrooper,” Magsig said. “He regularly displayed the type of courage, discipline, and empathy that the nation expects from its warriors.”

“Sgt. Jonathon Hunter was the leader we all want to work for — strong, decisive, compassionate, and courageous,” the colonel added. “He was revered by his paratroopers and respected throughout his unit.”

Both of the soldiers were on their first deployment, officials said.

Harris joined the Army in October 2013 and Hunter joined in April 2014, according to the 82nd Airborne Division. Both men attended Basic Combat Training, Advanced Individual Training and Airborne School at Fort Benning, Georgia, before being assigned to the 1st Brigade.

“Chris and Jon lived and died as warriors. They will always be a part of the legacy of the Devil Brigade and their memory lives on in the hearts and minds of their fellow paratroopers,” Magsig said. “Our thoughts and prayers are centered on the families and loved ones of these two great Americans.”