Faith helped unite and drive the men of one of the Army Special Forces teams that launched the invasion of... 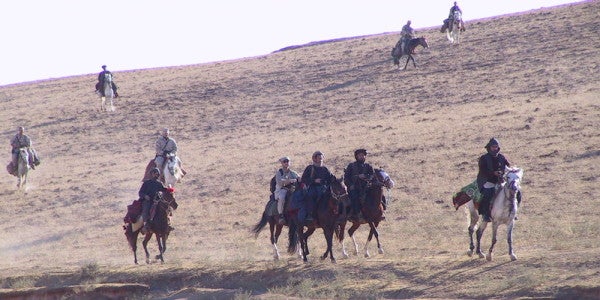 Faith helped unite and drive the men of one of the Army Special Forces teams that launched the invasion of Afghanistan in late 2001, retired soldier Will Summers told about 1,200 people Saturday night at one of Manna Church’s Easter services.

Summers was part of a team of 12 Special Forces soldiers, plus two Air Force combat controllers, who slipped into the country shortly after the 9/11 terrorist attacks. They connected to the Northern Alliance, a group of resistance fighters in the northern part of Afghanistan.

The Americans and the Northern Alliance brought war to the Afghanistan’s Taliban government.

The team is portrayed in the recent movie, 12 Strong, and in the 2009 book “Horse Soldiers” that the movie is based on. During his military service, Summers spent time at Fort Bragg and was a member of Manna Church. The church invited him to speak at Easter services this weekend.

Related: ‘12 Strong’ Isn’t The Afghan War Movie We Deserve, But It’s The One We Want »

In the initial push, the military had little hope for success, Summers said. He said the team’s supervisors told them, “We have no expectations of you all returning. So your job — your job is to get in as far as you can and then we’ll send reinforcements and we’ll pull whoever’s left out.”

The team said, “All right. Let’s do this,” Summers said.

“Here’s what they didn’t count on,” he said. “We had God-fearing guys on our team, who loved God.”

Related: The Army’s Guide To Waging War On Horseback Is Brilliant And Ridiculous »

The Afghan people were surprised that the Americans began trying to help them rebuild, Summers said. Afghanistan had been at war for many years, and when one set of bad guys were defeated, he said, they were replaced by a different group of bad guys or dictators.

“We were given an opportunity to speak to the elders of the town,” Summers said. “They wanted to know, 'Why, why are you doing something different?'”

The soldiers told them.

“We’re believers,” Summers said. “We come from a country of Godly people. We still exist. We know who Jesus is. And he’s called us to come in here. And for those of us on the team who are believers, we said, ‘Look, we’re extending the love of God to you. This is how Jesus lives through people.’”

Summers described that as “eye-opening” to the Afghan elders.

“And we had a lot of discussions about that,” he said.

“The story that they tell is that 12 — this gets me every time — 12 angels of light descended in Afghanistan,” he said. “And led us to freedom, and delivered us from those who oppressed us.”