CIA agents were on the ground before we invaded Iraq, and they knew it was going to be a clusterf*@k

"It’s not Hollywood, it’s not sexy. It’s the down and dirty — guys doing what had to be done.” 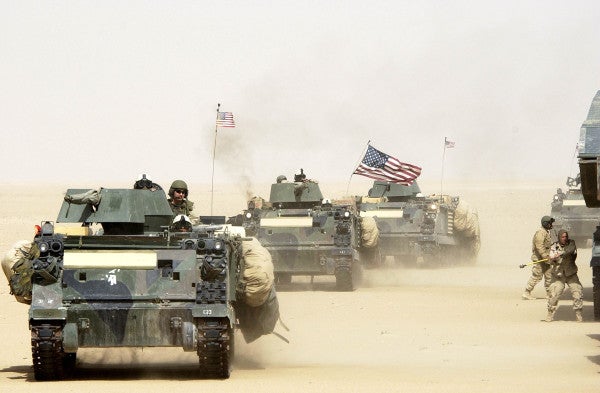 On March 20, America will celebrate — if that’s the right word for it — the anniversary of our invasion of Iraq, one of the most well-executed projections of U.S. military might in history. Despite fears that we were underestimating Saddam Hussein’s capabilities (not to mention an elaborate $250 million dress rehearsal during which the team playing the enemy quickly decimated the U.S. fleet), a coalition including American, British, Australian and Polish armed forces managed to seize control of the country within a mere 21 days, with relatively few casualties on eitherside.

Leaving aside the difficulties presented by the subsequent occupation, Operation Iraqi Freedom was an impressive feat of warfighting, arguably every bit the “cakewalk” that one widely mocked column predicted it would be.

But while military textbooks attribute the campaign’s success to careful planning and coordination, an ability to improvise, superior personnel, air supremacy, and the deployment of overwhelming force, less commonly acknowledged is the role of a minuscule advance team made up of CIA special activities division forces and special forces operators, who spent nine full months in Iraq before the Tomahawks started flying, carefully preparing the battlespace. Meanwhile, they also got a preview of the U.S. military’s misguided view of the Iraqi Army, which would later lead to the undoing of so much good work.

The invasion’s success was attributable to careful preparation, Sam Faddis, the former CIA operative who led the first team into Iraq told Task & Purpose. “In the north, the Iraqi military didn’t put up a fight,” he explained. “They left their barracks and went home. But that didn’t just happen. We had been working them for a long time, destabilizing the regime.”

Faddis ran a eight-man CIA team allied with the Kurds. Four of them, working under Faddis’s deputy, embedded with the PUK in Sulaymaniyah, while Faddis established a base with the KDP in Erbil. Each group was eventually joined by three Green Berets belonging to Operational Detachment Alpha 066 of the 10th Special Forces Group. Others followed as the invasion drew nearer.

The operation had no official title, but the participants came up with their own name, Operation Hotel California, based on the famous lodging in the Eagles song from which you can check out but never leave. “That was our dark humor,” Faddis said. Fifteen years on, it appears to have been a prophetic choice.

Much of the team’s work consisted of what Sid Crews, a former Special Forces detachment commander from the Second Battalion, called “snoopin’ and poopin’,” Vietnam-era slang for covert ops. One key goal was to determine the best routes by which the Fourth Infantry Division could come in from the north — a point that became moot when Turkey briefly denied U.S. forces use of its territory. (They later reversed the decision.) “I was focused on surveying bridges, looking at airfields. developing the battlespace, establishing the conditions, determining the arrayal of enemy forces — classic advance force operations,” Crews said. They spent their downtime holed up in a safe house, “writing reports like crazy.”

Of course, the advance team was also tasked with hunting WMDs — the administration’s primary reason for launching the war. But they mostly came up dry. While the CIA did find some modest chemical and biological weapons factories, they belonged to Ansar al-Islam (AAS), the Al Qaeda-linked insurgent group operating in Kurdistan, which had no ties to Hussein. Once it became clear AAS was a serious threat, and that a contingent of Al Qaeda fighters had snuck into the country after the U.S. invaded Afghanistan, Faddis and his team developed a plan to destroy both groups in August of 2002. But when they requested SOCOM assets, they were turned down cold, marking, Faddis says, the second missed opportunity to take out Al Qaeda (the first being in the mountains of Tora Bora, Afghanistan, the year before).

As time went on, they increasingly concentrated their efforts on picking up sources — men with information about the regime who were eager to share it with U.S. intelligence. Since no Americans were officially operating in Iraq at the time, such operations involved a fair amount of risk. Crews was fond of comparing his job to that of a rodeo clown. “The Agency guys were the ones riding the bull,” he said, and the commandos “were the ones running in front making sure they didn’t get hurt. We were the trigger pullers on the ground.”

Before long, the operational tempo called for near-daily pickups and interrogations of would-be sources. The CIA, Crews said, “was leaning really far forward, trying to get a lot of information very quickly.” In exchange, they threw around a lot of money, and as a result, the intel they got was not always accurate. Crews remembered one guy who offered information on Iraqi communications. But when they laid a map on the table in front of him and asked him to pinpoint the key sites, “It was like a hog looking at a wristwatch,” Crews said. The guy knew nothing. He was “more of a pain in the ass than anything else.” He was one of many they wound up cutting loose, which naturally entailed a new danger. “Our worst fear is that he would go back south of the line and tell someone the Americans have a safe house.”

The solution: scare the living hell of of him. “That was our job,” Crews explained. “Put the fear of God into them,” usually by threatening to turn them over to the Kurds, the Egyptians or someone else. “That was usually enough to keep folks from being stupid.”

Eventually, the Iraqi intelligence service got wise to the Americans operating in their midst. “They started running agents against us,” Faddis recalled. “The idea was, ‘We’re going to feed you so much sexy stuff you’ll agree to meet this guy some place riskier.’” Wise to the plan, the Americans successfully apprehended a half a dozen double-agents or more. “I’ve lost track of the number,” Faddis said.

The most important project of the advance team is one that was ultimately thwarted by our own military. After months of effort, one of Faddis’ team members working in collaboration with Peshmerga Gen. Babakir Zebari managed to win a verbal agreement from the commander of the Iraqi Army’s Fifth Corps as well as the mayor of Mosul and a group of tribal chiefs to make a formal surrender. Fifty thousand enemy soldiers were to defect en masse and come over to our side. The city of Mosul would be in American hands without a shot being fired. And, Faddis believed, the rest of the Iraqi Army in the north would likely follow suit. But since the CIA had been forbidden by the DOD from accepting a surrender, the job fell to Lt. Col. Robert Waltemeyer, Second Battalion Commander, 10th Group Special Forces, who insisted on a number of unnecessary terms, according to Faddis, and insulted the tribal chiefs. The senior Iraqi commander balked — indeed, he killed the Peshmerga fighter who’d delivered the request — and the deal fell apart.

Robert Waltemeyer, now the director of the office of management at the Veterans Benefits Administration, did not respond to a request for comment.

Although the Fifth Corps, like most of the Iraqi Army, ultimately dissolved anyway when U.S. forces arrived in the country, Faddis and Crews both insist that keeping key elements the military intact and using them during the occupation would have helped prevent the insurgency that emerged in the ensuing months.

“You remove the top Baathist guy, promote the guy below him and keep the structure the way it was, and you could have avoided this power vacuum that allowed ISIS and all these other folks to come in,” Crews said. “Tactically it was not that big of a deal, but operationally and strategically it was a very big deal.”

Both men saw the incident as a forerunner of the order by the Coalition Provisional Authority just six weeks later, following the successful conclusion of combat operations, to officially disband the entire Iraqi military. This move is now widely considered to have set the stage for the insurgency. “You could have reconstituted that military in our employ in a heartbeat,” Faddis said, “and instead of 160,000 Americans trying to be police, firemen and everything else, you would have had the Iraqi military running checkpoints and we never would have had all the chaos. The only job of the U.S. military at that point would have been to make sure the Iraqis would follow orders.”

Although Faddis, now an author, is hard at work on a book about the experience (a follow-up to his 2009 tome, Operation Hotel California), the story of the handful of Americans who secretly lived and worked in northern Iraq, quietly preparing the ground for the invasion, is largely unknown. In part, that’s because it remained classified for years.

But Crews admits that the tale also lacks the cinematic punch exhibited by, say, the CIA-Special Forces team that led the invasion of Afghanistan, the subject of the book Horse Soldiers and the recent film adaptation 12 Strong. “People want to see guys on horseback shooting at tanks with M-4s,” he said. “But those stories are all bullshit. It never looks like that on the ground. It’s not Hollywood, it’s not sexy. It’s the down and dirty — guys doing what had to be done.”