Not your typical air-to-air kill. 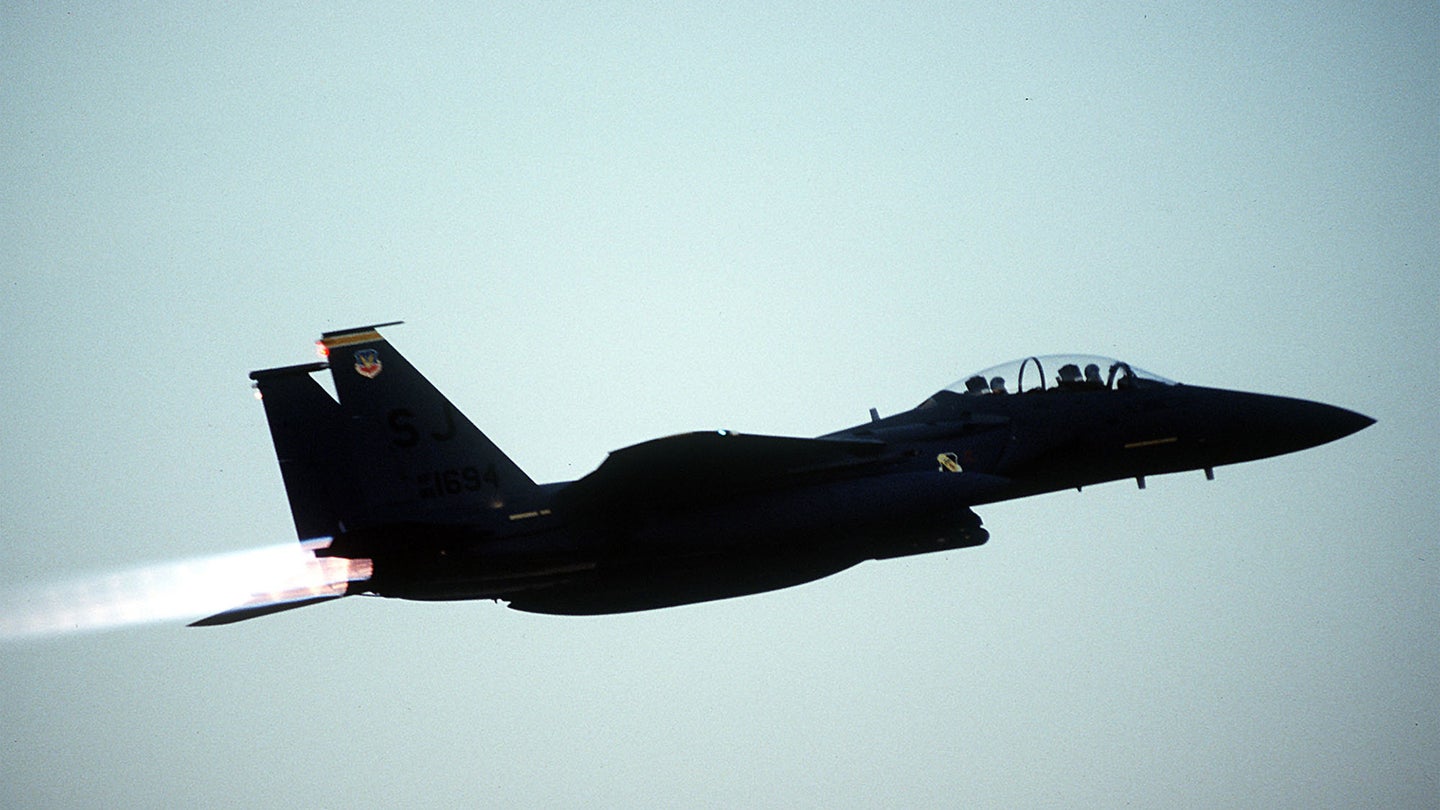 A F-15E Eagle aircraft takes off on a mission during Operation Desert Shield. (DOD).
SHARE

U.S. military aviators won several impressive air-to-air engagements during the Gulf War, but perhaps the most stunning victory happened on Feb. 14, 1991, when two airmen in an F-15 successfully dropped a bomb on Iraqi helicopter that was in the air.

Air Force Capt. Tim “Rhino” Bennett was hunting Scud missiles near Al-Qa’im in northwestern Iraq — much further north than where any other coalition aircraft were operating — when he and his weapons system officer Capt. Dan “Chewy” Bakke got word that an American special operations forces team had been discovered and was under attack from Iraqi helicopters.

It was early morning, long before dawn, and the weather was bad as Bennett took the plane low so that Bakke could find the Iraqi helicopters with the F-15’s targeting pod, Bennett told Task & Purpose. As soon as they were at an altitude between 1,500 and 2,000 feet, they could see the Iraqis and “a lot of shooting.”

“Basically, they had this group of special ops guys surrounded,” Bennett said. “And the helicopters were moving. You could see them flying around. It’s so bright up under there with all the muzzle flashes, the shooting going on, you could see there’s troops all around them.”

It looked like the helicopters were transporting Iraqi troops to attack the American special operators, Bennett said.

His plane was not armed with any long-range AIM-7 Sparrow missiles, which are guided by radar and effective up to 6 miles, because at the time F-15Es could not be configured to carry both bombs and Sparrows, he said.

“If I had had AIM-7s on board, we would have shot them with that a little bit further away,” Bennett said.

Instead, his plane was carrying four GBU-10 bombs, each weighing 2,000 pounds, and four short-range AIM-9 Sidewinder heat-seeking missiles. With those weapons at his disposal, Bennett came up with an idea.

“I’m thinking: Hey, let’s let a bomb go — because they were already danger close, and they were all getting shot up,” Bennett said. “If they’re sitting on the ground, we’ll hit the helicopter. If not, it will give them something to think about and get their attention away from these guys.”

Bakke targeted an Iraqi Mi-24 Hind helicopter on the ground with a laser-guided bomb while Bennett maneuvered the F-15 for the attack. After the bomb was released, Bennett suddenly saw on his radar that the helicopter had taken off again.

“Maybe three to five seconds later, as I’m turning in to re-execute the attack from a different azimuth, the bomb — we’re so close, you can see the resolution very well — you could see it hit the helicopter,” Bennett said. “We had delayed fuzes on those things, so that when we hit a Scud or a Scud site, it would penetrate and then blow up. I think we had a 0.25-second delay on the bombs. So, really the bomb blew up right below the helicopter as it went through it. There weren’t even little pieces of it. It was a great hit.”

By a stroke of luck, the helicopter had flown toward the F-15, allowing the bomb to find its target, Bennett explained. If the Hind had gone in any other direction, the bomb would not have had been able to reach it.

But any elation that Bennett and Bakke might have felt quickly dissipated when a U.S. service member aboard an E-3 Airborne Warning and Control System aircraft asked them if they had visually identified the target first to make sure it was not an American helicopter.

The U.S. military was flying special operators from Syria into Iraq in MH-53 Pave Low helicopters at the time, Bennett said. Since it was night, Bennett had seen an infrared image of the Iraqi helicopter. It looked like a Hind, but suddenly he started to wonder if it could have been a Pave Low instead.

Bennett said that he and Bakke marked the area where the helicopter was destroyed in case it turned out to be friendly and the U.S. military needed to launch a combat search and rescue mission for survivors, but they both knew “nobody was living in that.”

“It scared the shit out of both of us, when she asked that,” Bennett said. Thankfully, it turned out that Bennett was correct: It was an Iraqi Mi-24 Hind, not a friendly helicopter. “Within about five minutes, we knew that we didn’t have any helicopters up — it seemed like about five hours.”

Bennett left active duty after the Gulf War, but he flew F-16s with the South Carolina Air National Guard until he retired as a lieutenant colonel five years ago. His advice for young fighter pilots today is to train hard to face the highest threats that they may have to fly against.

“My personal opinion is we’ve gotten too used to flying around at medium altitude a lot and you rely on GPS [Global Positioning System] a lot and things that can help you out — but can be taken away too,” Bennett said. “That’s a long, drawn-out way of saying: Always, always try to develop your fighter pilot skills. The truth is it will always be — it should always be — a business where you’ve just got to be aggressive because your job is to max-perform the airplane.”