Santa at War: A visual history of Jolly Old St. Nick in the unlikeliest of places

Santa has been in range of snipers far more than the North Pole probably cares to admit. 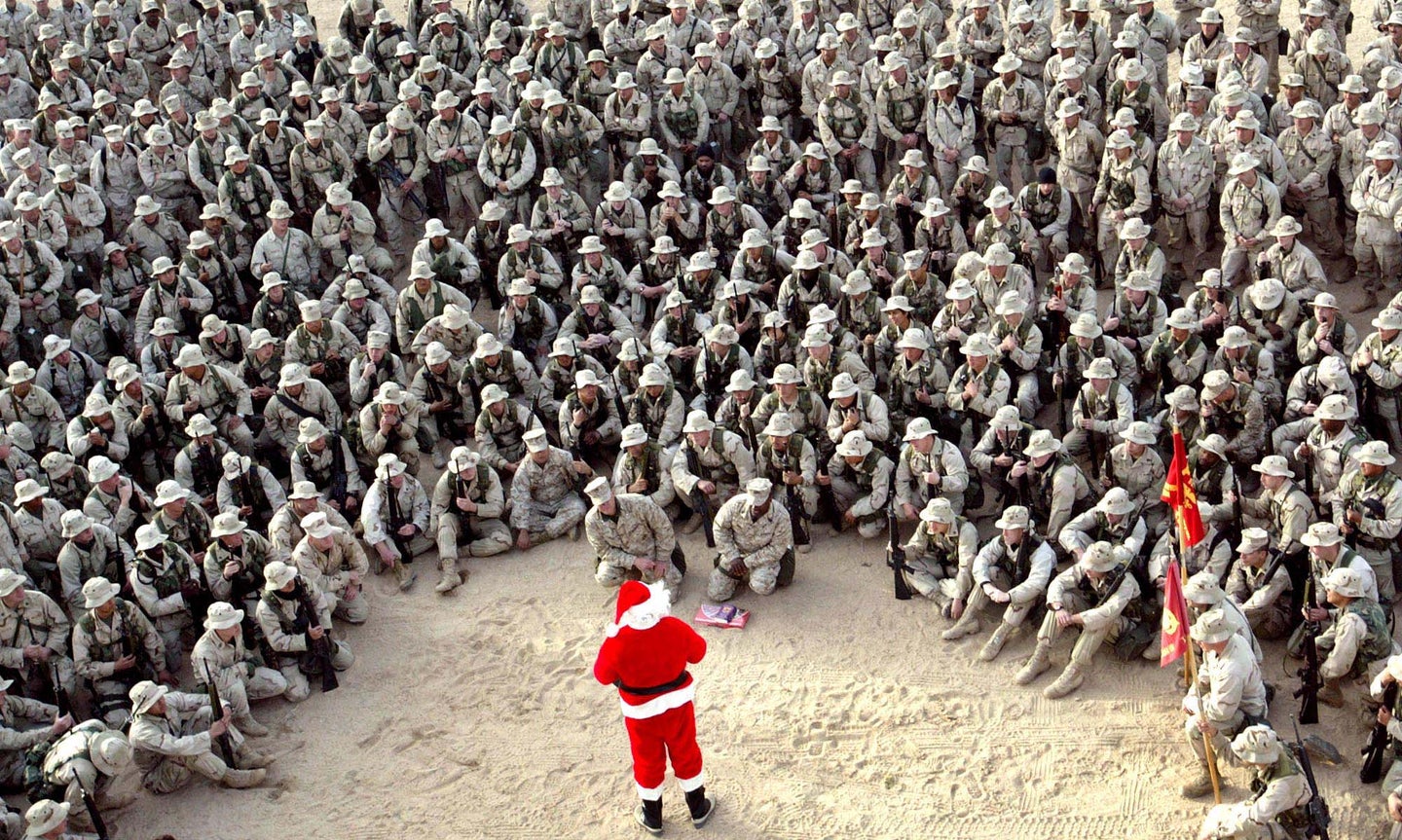 The holidays often bring a change in the weather; Christmas trees and decorations; gift-giving; and warm gatherings in a warm place. But for those in the military, particularly those deployed far away from home, this time of year can also bring pangs of longing for family and friends back home.

The push-pull of the holidays — that absence from home combined with a desire to take ‘home’ with you — has led those who are far afield to bring their traditions with them wherever they go. For generations, that’s meant decorations, lights, and festive cheer have graced overseas bases and austere outposts — often aided by a bit of rank-and-file ingenuity — like the time U.S. troops built a Christmas tree out of sandbags.

But there’s one Christmas tradition that seems particularly at odds with the environment it finds itself in, yet it persists nonetheless: Santa Claus at war.

Santa Claus’ foray into war and conflict zones date back to at least the 1800s, with Harper’s Weekly publishing an illustration of Kris Kringle giving gifts to beleaguered Union troops in 1862 — a year into the Civil War.

Father Christmas has made the rounds in the years since, with American troops posing as Santa during both World Wars, the Korean and Vietnam Wars, and other conflicts. In a dangerous place that is far from family and friends, the “ho, ho, hos” of a soldier going through similar hardship can be a welcome distraction.

In recent years, the red-suited likeness of Jolly Old St. Nick has appeared downrange in Iraq and Afghanistan, from Baghdad to Mosul and on to Sangin and Marjah. In November 2011, a kitted-out yet-beardless Santa visited Marines with 1st Battalion, 6th Marine Regiment in Sangin, Afghanistan to bring them a laugh — and hand out Gerber multi-tools, knives. Or at least, one of his helpers, Sgt. Maj. Larry J. Harrington, did, donning a Santa suit to visit Marines in remote outposts along a strip of dirt highway linking the Nahri Saraj and Kajaki Districts.

And on Christmas Day 2008, Santa appeared in red top and Army camouflage at a combat outpost in Khost Province, which no doubt lightened the mood for 101st Airborne Division grunts tense “after a mortar attack,” according to the caption by Getty photographer Jonathan Saruk.

The character has also cropped up over the years at tumultuous times and amid civil unrest; in December 2014, a Palestinian protestor dressed as Santa Claus hurled a tear gas canister back at Israeli security personnel on the West Bank. In 2003, he was in Seoul, South Korea protesting the Iraq War, and in 2019 he was in Baghdad posing with a rose alongside Iraqi security forces at another protest.

Santa has also made numerous appearances alongside U.S. allies downrange, giving out gifts to British soldiers at Camp Bastion, or with South Korean troops in 2002 shortly after the War in Afghanistan had begun. Though Santa Claus may be best known as a children’s story or the lead character in the vast majority of Hallmark movies, it’s no real wonder that his reach extends beyond — to scenes and moments where you’d least expect him. It’s not particularly surprising, wherever people go, they take their traditions with them.

Here are more photos of Santa Claus through the years and wars.