'I think this is one of the most direct examples of unlawful command influence that I have seen in a number of years.' 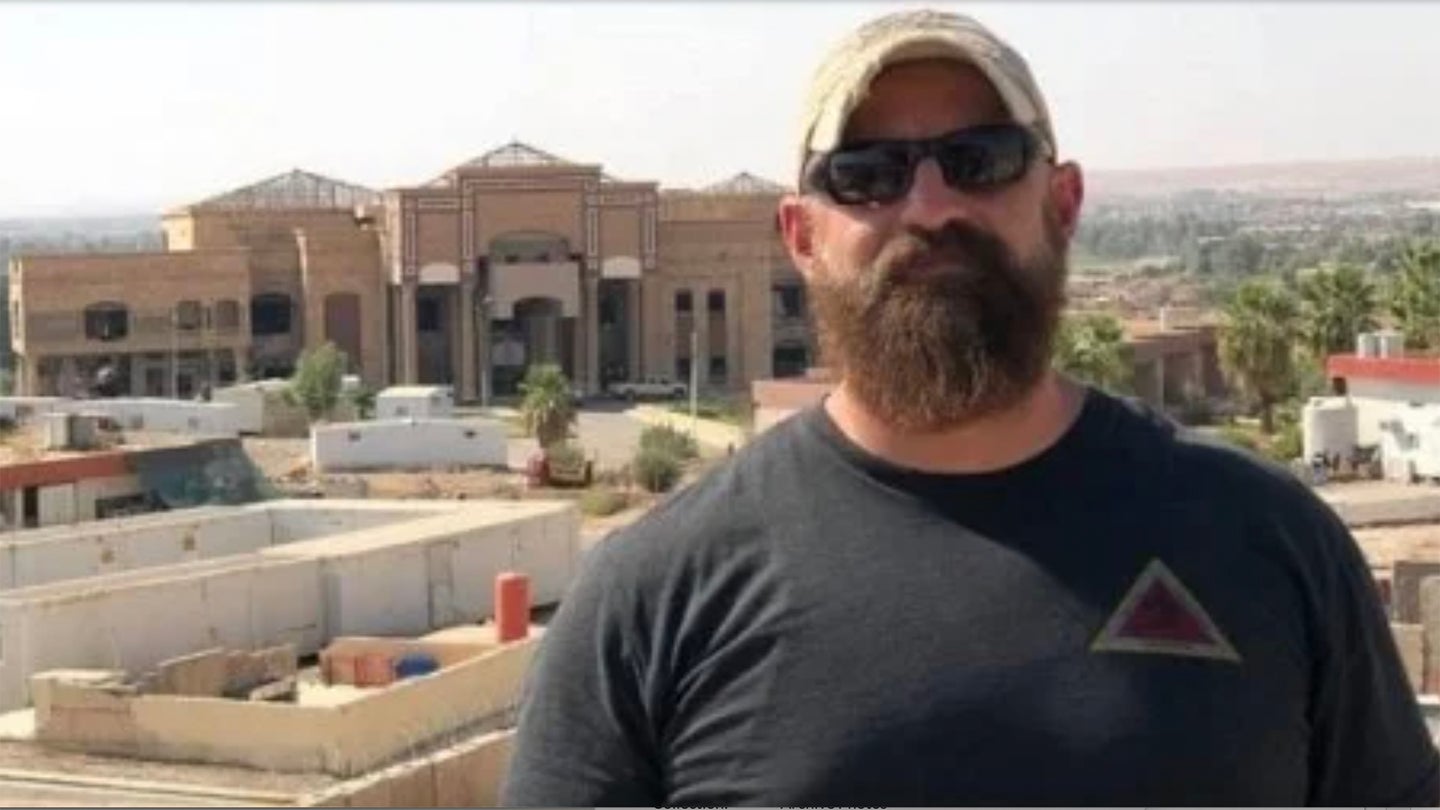 Rick Anthony Rodriguez, a former Green Beret who was working as a contractor for Lockheed Martin, died on Jan. 4, 2019 in Germany. (Facebook photo.).
SHARE

One of the Marine Corps’ top lawyers is being accused of interfering in the case of a Navy corpsman and two Marine Raiders who have been charged with the death of an American contractor after a 2019 altercation in Iraq.

The three men were charged with negligent homicide and other offenses after allegedly getting into an altercation with Rick Anthony Rodriguez on Jan. 1, 2019. Rodriguez, a former Green Beret who was working as a contractor for Lockheed Martin, was knocked out during the fight. He was taken back to his quarters and started having problems breathing. After being treated at an on-base medical center, Rodriguez was flown to Landstuhl, Germany, where he died on Jan. 4, 2019.

Now the defense attorneys for the three men are arguing that Col. Christopher Shaw, deputy director for the Judge Advocate Division, made not-so-veiled threats against Marine Capt. Matthew Thomas, who is one of the two military defense counsels representing Gilmet.

Under military law, commanders are strictly prohibited from influencing court proceedings, such as by statements that could be interpreted by subordinates as orders about whether to find accused service members innocent or guilty. When commanders interfere with the military justice system, it’s called unlawful command influence.

That is precisely what defense attorneys claim Shaw did during a Nov. 18 meeting with several defense attorneys, at Camp Lejeune, North Carolina, when Shaw allegedly told Thomas that it is a “legal fiction” to think that attorneys are protected from outside influences, Thomas later recalled in an affidavit obtained by Task & Purpose.

“Colonel Shaw then directly squared his shoulders and chair towards me and he did not break eye contact with me for a significant period of time,” Thomas said in the affidavit. “During that time, Colonel Shaw specifically stated, ‘Captain Thomas I know who you are and what cases you are on and you are not protected.’ Colonel Shaw followed up by stating, ‘…the FitRep [fitness report] process may shield you, but you are not protected. Our community is small and there are promotion boards and the lawyer on the promotion board will know you.’ Colonel Shaw reiterated comments such as ‘shielded but not protected,’ multiple times.”

Shaw then went on to warn that defense attorneys who had represented the eight Marines accused of killing 24 Iraqi civilians in Haditha, Iraq, in November 2005 were not promoted. One of those attorneys was retired Lt. Col. Colby Vokey, who now also represents Gilmet along with Thomas.

“Shaw explicitly stated that ‘some of the attorneys on those cases were good attorneys,’ and that on the promotion board our community is small enough that the attorneys ‘will know what you did,’” Thomas recalled in the Dec. 6 sworn affidavit.

Vokey told Task & Purpose on Monday that Shaw’s remarks about attorneys from the Haditha courts-martial not being promoted clearly referenced him.

When he was still in the Marine Corps, Vokey was the regional defense counsel for Staff Sgt. Frank Wuterich, the senior Marine on the Nov. 19, 2005 patrol that preceded the killing of Iraqi civilians. Wuterich eventually reached a plea agreement with prosecutors that allowed him to avoid going to prison and receive a general discharge under honorable conditions.

In contrast, several of the senior prosecutors involved with Haditha courts-martial and the Hamdania case in 2006 were promoted, Vokey said.

“The translation of this is: Capt. Thomas, you’re not protected; you’re on Gilmet with Vokey; and look what happened to Vokey – be careful, because it’s going to happen to you,” Vokey said. “We have judge advocates on promotion boards and they know what you do. That’s the unmistakable message that Capt. Thomas received, and so did all of the other judge advocates that were in the room.”

The Marine Corps is no stranger to unlawful command influence. In November 2017, an appeals court overturned the conviction of a Marine scout sniper who had pleaded guilty to urinating on the corpses of Taliban fighters after finding that then-Marine Corps Commandant Gen. James Amos had committed unlawful command influence by replacing the general in charge of overseeing the case after saying that he wanted the Marines involved in the scandal to be “crushed.”

Vokey and other attorneys representing the three service members in the Rodriguez case argue that Shaw has illegally interfered with the proceedings.

“I think this is one of the most direct examples of unlawful command influence that I have seen in a number of years,” Vokey said. “This goes to the heart of defending a service member at court-martial. It wasn’t even disguised. I’m not even sure I’d call it a threat. I think it was a promise that this will impact you.”

“As such, Colonel Shaw has direct control and sway over Captain Thomas’s career and flaunted that power during the DSO [Defense Services Organization] meeting,” according to the motion, which was filed on Dec. 10.

Now Thomas is concerned that he could be risking his career by continuing to represent Gilmet and other service members, who are accused of sexual assault, because the Judge Advocate Division decides what his future assignments and permanent change of station moves will be, Thomas wrote in his affidavit.

Gilmet has lost trust in Thomas to serve as his defense counsel because of what Shaw said, Gilmet wrote in a separate affidavit.

“I no longer believe Capt. Thomas is able to provide legal representation without consciously or subconsciously being influenced by Col. Shaw’s comments about the possible impact that his continued representation would have on his career progression,” Gilmet wrote. “I have lost faith and confidence in the military justice system.”

As of Monday, none of the charges against Gilmet, Draher, or Negron had been dismissed, said Maj. Hector J. Infante, a spokesman for Marine Corps Forces Special Operations Command. After several delays, Gilmet’s trial is slated to begin on Jan. 10, 2022.

It was not immediately clear if Shaw had faced any recriminations for his comments at the Nov. 18 meeting.

“We are aware of the allegations and are unable to provide any information at this time,” Marine Corps spokesman Maj. Jim Stenger said on Monday. “Out of respect for the legal process, we are not going to comment on pending litigation or an active investigation.”

Several other attorneys who attended the meeting at Camp Lejeune have expressed alarm about Shaw’s comments, including Capt. Steven M. Trottier, who noted in an affidavit that he inferred from Shaw’s comments that the attorneys assigned to the Haditha trials were not promoted despite their skill at litigating because they had spent so many years in the Defense Services Organization.

“I left this meeting highly concerned about the comments made by Colonel Shaw in regards to defense attorneys,” Trottier wrote. “To an extent, it makes me worried my representation of clients, especially in cases with media attention or other hot button issues, such as sexual assault, will carry a negative connotation for me personally and professionally.”

Capt. Michael E. Blackburn wrote in an affidavit that Shaw said as if it were a matter of fact that there was pervasive “deviant behavior” in the Marine Corps that defense attorneys could not understand unless they had served as staff judge advocates or prosecutors.

Capt. Thomas Persico was struck by Shaw’s implication that the reputations of the defense attorneys from the Haditha courts-martial suffered as a result of their work on the cases.

And Capt. Jonathan M. Bunker was concerned by Shaw’s comments about attorneys who have spent “more time in defense than JAD [Judge Advocate Division] believes reasonable” or those assigned to high profile cases.

“The meeting highlighted that those who represent the Constitutional rights of the accused are, at the highest levels of this organization, viewed in a negative light and their careers are likely to suffer because of it,” Bunker wrote.