“I was made to feel like I was a second-class citizen and a piece of shit for things outside my control.” 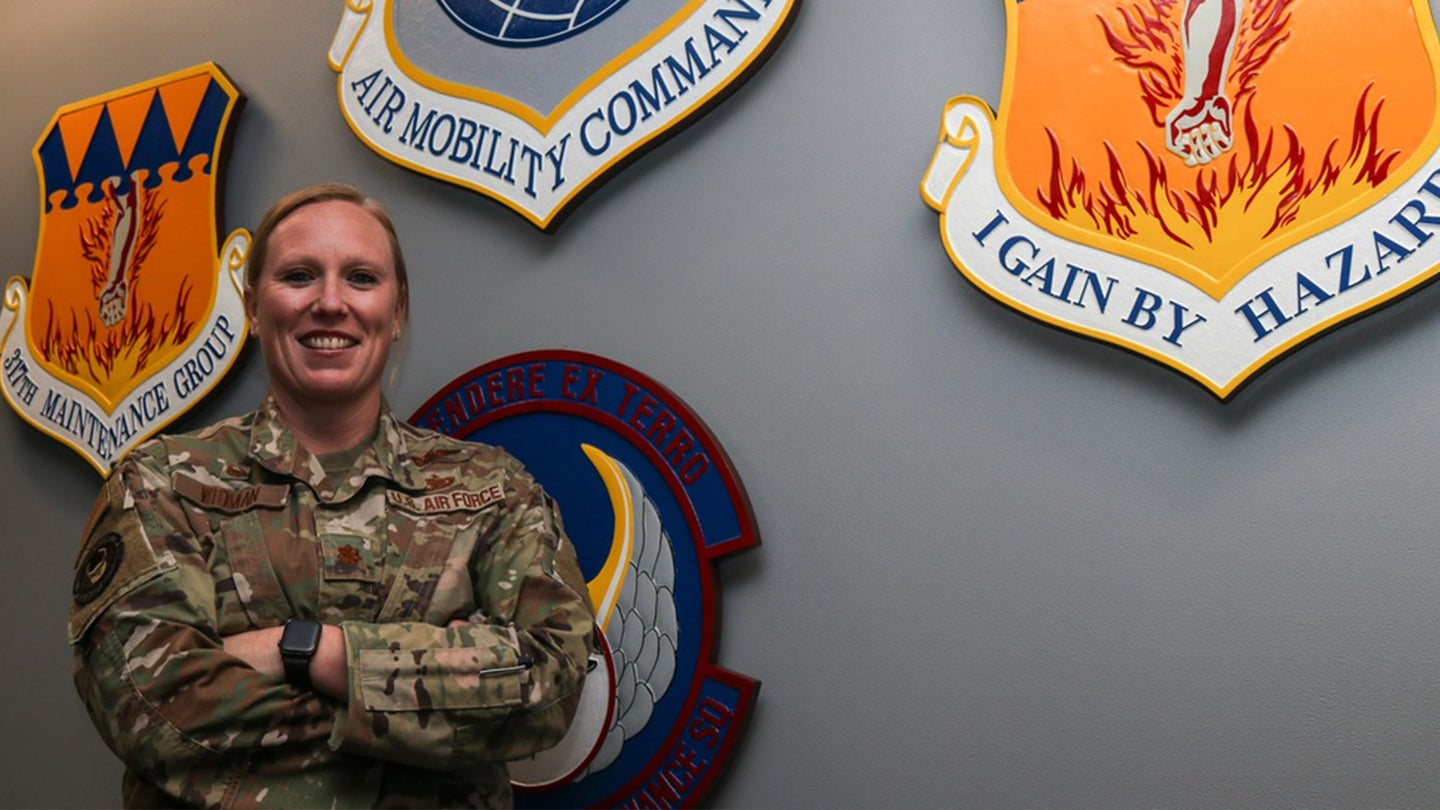 The Air Force relieved an officer of command who served separation paperwork to an airman in a mental health clinic for treatment after a suicide attempt, made one airman feel like “a piece of shit” for going through a medical evaluation board, and retaliated against an airman’s spouse.

Maj. April Widman, the commander of the 317th Aircraft Maintenance Squadron at Dyess Air Force Base, was fired at 9 a.m. on Dec. 2, after the commander of the 317th Airlift Wing, Col. James Young, “lost confidence in her ability to lead” the squadron, said 1st. Lt. Kaitlin Cashin, public affairs officer for the 7th Bomb Wing at Dyess. Maj. Charles Schulz temporarily assumed command of the squadron the following day.

“Command of an Air Force unit is a position that requires trust, both up and down the chain of command,” Young said in a statement. “When that trust is lost it affects good order and discipline, unit cohesion and ultimately risks mission accomplishment.”

The service began investigating Widman on Sept. 29 “to ensure Air Force standards for professionalism and culture are upheld by leadership while affording all members due process,” Cashin told Task & Purpose.

Though the investigation of Widman is still ongoing, two airmen who served under her spoke with Task & Purpose about their experience under her command. Both spoke under the condition of anonymity out of fear of professional retaliation. Widman declined to comment.

“She was very unfair and unethical to members going through medical treatment and those who sought mental health,” said an airman who served with 317 AMXS for five years who agreed to speak with Task & Purpose under the pseudonym “CL.”

CL felt that unfair treatment personally when he was recovering from injuries suffered while deployed. CL was undergoing medical treatment and started a medical evaluation board (MEB) when Widman took command of the 317 AMXS in the summer of 2020. Medical evaluation boards help the Air Force determine if an airman is still physically able to continue serving in the branch.

CL soon realized that his physical wellbeing and the wellbeing of his family were a low priority for Widman, who told him that he would have to come back to work and fit his medical appointments around workdays. He was also told to make up for time absent from work as a result of the Air Force directed-med board appointments. This made life more difficult for CL because he was already unable to drive due to his medical issues. His command team said they would not help him with transportation due to “manning and operations issues,” he said.

“Coming out of treatment, I went to this meeting with her, the shirt [Air Force term for first sergeant], and squadron chief,” CL said. “Looking back, I realize that instead of being asked how we can make this happen, I’m basically told what is going to happen. Bear in mind this is one of my first interactions with her. I thought things were going to be good, I was coming back to work and was still looking to prove my value to the Air Force and that I could still continue to serve at this point. But I quickly learned that the folks at the top of my chain did not care.

“Right out the gate she was extremely un-empathetic towards what I and my family were going through,” the airman added. “I was made to feel like I was a second-class citizen and a piece of shit for things outside my control.”

Luckily, CL was saved by a few good senior non-commissioned officers in the unit who “care about their troops and saw what was happening,” he said. “Those guys got me into a place where I could work within my limitations at the time and be a productive contributing member to the unit, without compromising my recovery.”

CL also recalled an incident when Widman retaliated against another airman’s wife for trying to help the spouses of other airmen. The wife was a member of the Key Spouses organization, where spouses of service members volunteer to help out the families of deployed airmen and anyone that could use a hand. It’s a commander-run program that fell under the oversight of the Airmen and Family Readiness Center, CL explained.

In this particular instance, the 317 AMXS had a large deployment ready to go, but for whatever reason Widman authorized them to leave early for pre-deployment training, according to CL, which caused a bunch of logistical issues. To make matters worse, their spouses needed support from base agencies, but the commander did not allow their deployment orders to be distributed to the members, which would have allowed the spouses to get that support. The member of Key Spouses managed to get those orders on her own, and she worked with the Airmen and Family Readiness Center to make sure the other spouses had access to the right resources. But the fact that the spouse got access to the orders set Widman off, CL recalled.

“Widman was mad … the unit was already trending at this time due to those logistics issues,” CL said. The spouse then stepped down from the Key Spouse organization, but Widman continued to target her husband, CL said.

“I can’t give names but I can say that I witnessed the results of her trying to break him,” he went on. “This was unfortunate because they’re both wonderful people, but they’ve continued to persevere despite it. This whole incident sparked an investigation and we know what came from that.”

Though Widman declined to comment for this story, when asked about the accusations that Widman had retaliated against subordinates, the 7th Bomb Wing replied: “Retaliation is illegal and not in alignment with our Air Force core values for integrity,” Lt. Cashin wrote. “If reports from members are made, they are taken seriously through due process.”

CL said at the end of all this, “I got burnt out and no amount of optimism could change the reality of the situation,” he said. “I was done, no more dreams of commissioning and doing 20” years in the service.

A second airman said he experienced similar treatment. The airman said he was “completely open” with his leadership about mental health issues he was going through in the fall of 2020 and spring of 2021. For example, he kept his supervisors aware that he was taking medication to treat his depression. However, the medication was not working for the airman, which led to him oversleeping during a duty day and he was demoted from senior airman to airman first class as a result.

“I talked to my supervisor and he said that was pretty extreme,” the airman said of the demotion.

The airman’s mental health continued to deteriorate until one day in March 2021, when he attempted suicide. He survived and was checked into a mental health clinic in San Antonio, about a four-hour drive south of Dyess. But the distance did not stop Widman and the assistant first sergeant of the 317 AMXS from making the drive down to the hospital to serve the airman separation paperwork.

“So they wasted a whole day and ruined my treatment,” the airman said. “I don’t know why they had it out for me so bad.”

Unfortunately, this airman may not the first to be served paperwork after a suicide attempt. In January, the top enlisted leader in the branch, Chief Master Sgt. of the Air Force JoAnne Bass, said she was looking into an incident of an airman in Colorado who was sent a Letter of Reprimand and a Letter of Counseling shortly after attempting suicide.

“This situation gives us an opportunity to reflect on the culture we need, where airmen understand their responsibilities as both leaders and wingmen,” she said at the time. “A culture where respect, trust, accountability, and compassion guide our actions.”

Other airmen shared negative experiences regarding Widman on social media.

“We had more than 2 dozen people reach out and tell us about how she, the first shirt, and other [senior enlisted leaders] were abusing folks going through issues that required treatment (both with mental health and other medical),” wrote The Salty Crew Chief 2.0, an Instagram page popular among Air Force maintainers, in a Dec. 3 post about Widman’s firing.

“We applaud leaders like those in the 317th [airlift wing] and [maintenance group] that opened channels and empowered people to come forward,” they added. “We want to again thank all those that came forward, knowing the risk if you were found speaking out.”

Widman’s removal from command comes as the Air Force struggles to confront a mental health crisis within its ranks, especially in the maintenance and security forces (the Air Force equivalent of military police) career fields. Members of those fields are widely understood to be the most depressed members of the service, and data leaked to the popular Facebook page Air Force amn/nco/snco in 2020 showed a higher suicide rate among those career fields than the rest of the branch.

CL’s experience was especially painful for him, considering how airmen are told from day one to “be a good wingman, seek help if they need it, and to trust their first sergeants and chain of command,” CL said. But the system has been broken for a while, he felt.

“Careerism and cronyism are a cancer in the Air Force that is causing retention issues,” he said. “We see it in the aircrew community and in several high-demand career fields like maintenance. People do not want to work for assholes who play favorites.”

The problems are compounded by a lack of effective prevention and intervention from mental health, he added.

“After 20 years of war you think the Air Force would’ve figured it out by now,” he said.

No matter what becomes of the investigation into Widman, wing leadership emphasized the value it places on leadership accountability.

“Our team is committed to instilling professional leadership characteristics not only for leadership at the squadron level, but for every airman” Col. Young wrote in his statement. “At the end of the day, our Air Force culture is one of professionalism, safety, and success achieved only through teamwork and accountability.”

Correction: This story has been updated to reflect that an Air Force spouse was not fired but instead stepped down from a Key Spouse organization.