"We need leaders at all levels to step up." 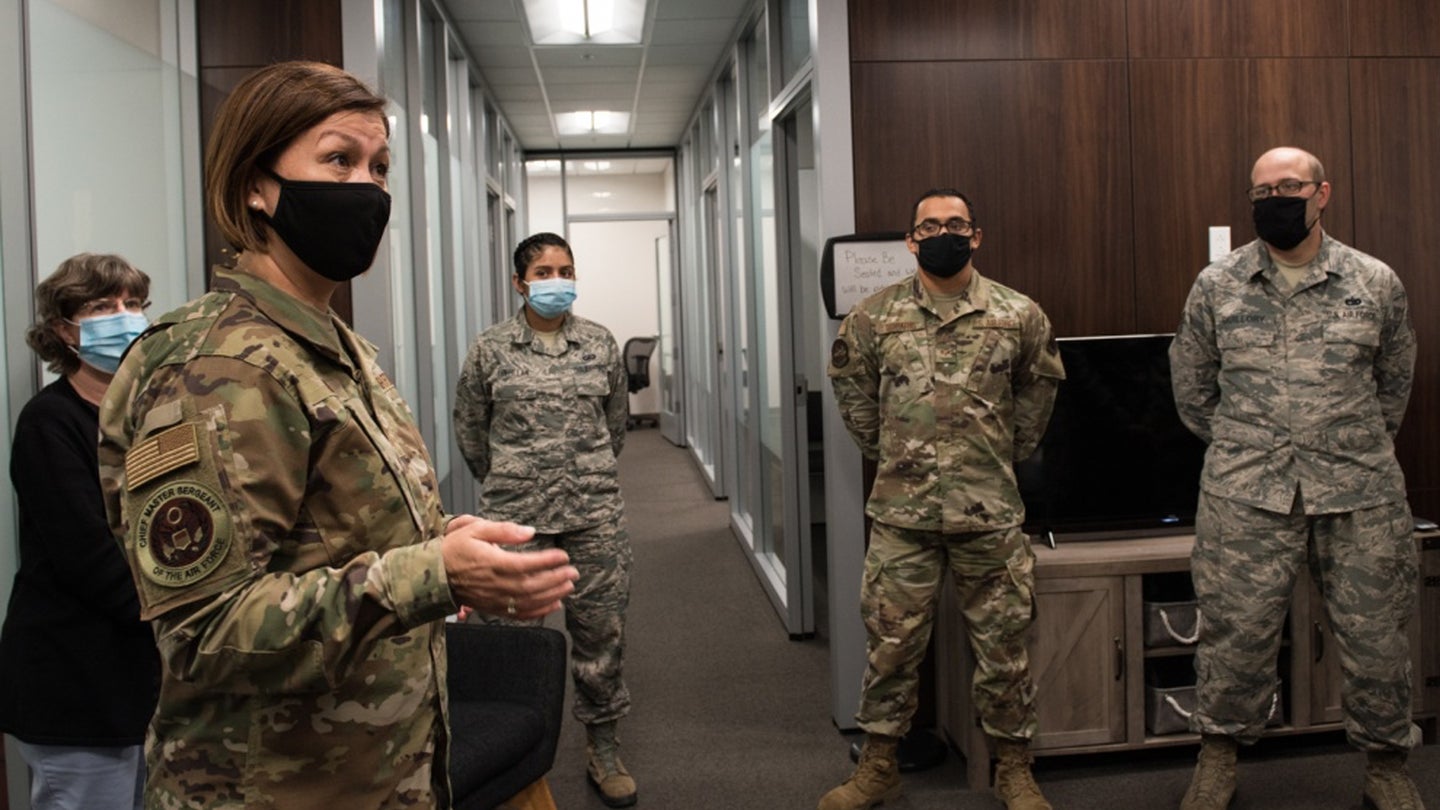 The Air Force’s top enlisted leader is looking into an incident involving an airman who was sent a Letter of Reprimand and a Letter of Counseling shortly after attempting suicide.

The airman said their unit, the 460th Space Wing’s Dental Flight based at Buckley Air Force Base, Colo., was plagued by toxic leadership problems and a hostile work environment, and other airmen stepped up on Facebook to share their own horror stories from the unit.

Chief Master Sgt. of the Air Force JoAnne Bass told Task & Purpose that, while the incident took place last year and the airman involved has since left the service, “this situation gives us an opportunity to reflect on the culture we need, where Airmen understand their responsibilities as both leaders and wingmen,” she said. “A culture where respect, trust, accountability, and compassion guide our actions.”

The situation came to light on Friday, when the popular Facebook page Air Force amn/nco/snco shared a message from an airman who was sent to a psychiatric facility for a week after attempting suicide with an IV catheter needle. The airman said they were sent to a facility by unit leadership not because they had attempted suicide, but because they showed up to work seven minutes late the day after the attempt.

After a week at the psychiatric facility without word from their leadership, the airman said their supervisor and first shirt stopped by to give them a Letter of Counseling for showing up late to work and a Letter of Reprimand for stealing the needle from the clinic where they worked.

The ‘first shirt,’ as the Air Force calls its first sergeants, is a special duty where senior enlisted members are charged with the health, morale, and welfare of the airmen serving under them.

“I never heard anything from them after that incident,” the airman wrote. “Never even asked me how am I doing after I was discharged.”

The Facebook post occurred a day before a Washington state newspaper reported that a suicidal Navy sailor was demoted by his commanders after seeking mental health treatment.

“Yup, that sounds familiar,” wrote one commenter on the Air Force subreddit reacting to the article.

The reprimand at the 460th Space Wing taps into two widespread, interconnected issues that many airmen think are undermining the Air Force. The first issue is a mental health crisis that saw a record number of suicides in the Air Force in 2019, and possibly a similar number in 2020. The second issue is a toxic leadership problem that many airmen say is crushing morale and mental health across the service.

After the original 460th Space Wing airman’s post was shared, the Air Force amn/nco/snco Facebook page shared messages from other airmen from the unit who described the dental clinic as a “hellacious work atmosphere” filled with bullying, unprofessional relationships, adultery, and favoritism.

“This place took every ounce of hope or faith I had for the military,” said one airman. “This place was the cause of my mental breakdown … Had I not been medically retired, I can guarantee I would not be alive today.”

Another airman shared an Inspector General complaint they had filed in the hopes of starting an investigation of the dental clinic. The airman did not specify when they filed the complaint, but they said an ensuing investigation resulted in no changes to leadership there.

“This is still going on, trust me, I’ve only been out a couple of weeks,” they wrote in a post shared to Air Force amn/nco/snco on Friday. “The ones who remain are very unhappy and want out by any means.”

Specifically, the airman who filed an Inspector General complaint said the master sergeant serving as flight chief of the 460th Space Wing dental flight allowed male airmen serving beneath her to make sexist, homophobic, or ableist jokes; sexually harass their female peers; or have inappropriate relationships with other airmen or with patients. Because of a climate of favoritism, enlisted leaders overlooked the expiration dates on emergency medical supplies which “could have resulted in loss of life if the items weren’t discovered in time,” the airman wrote; illegally shredded patient records; drank with underage clinic members; blew off appointments with patients, or even assigned undertrained employees to treat patients.

“The patients are made to believe they have received the proper treatment when they have not,” reads the complaint. Furthermore, airmen were afraid to stand up to the master sergeant in charge because “we have all faced a form of repercussion and backlash from her,” the complainant added.

The posts seem to have gotten some powerful eyes on the issue. In the comments section for a New Year’s Day post on Bass’ Facebook page, a Facebook user asked the chief to comment on the letters of reprimand and counsel.

“Appreciate you bringing to my attention,” Bass wrote. “We are looking into this.”

In a telling detail, dozens of Facebook users responded with a single period in their comments, which means they will be notified when the comment thread is updated. The fact that so many posters left periods indicates strong interest in the results of Bass’ probe of the issue. Commenters praised the Facebook user, Warren Mazanec Jr., who asked Bass for her thoughts on the matter.

“This needs to be addressed, please,” one wrote. “This is not how we take care of our airmen.”

In her message to Task & Purpose, Bass said the Air Force will need better leadership if it hopes to win future wars.

“We are in an era of contested domains and how we recruit, train, retain, treat and off-board our people will determine the readiness of our force,” she said. “As such, we need leaders at all levels to step up, care about the issues impacting our Airmen, and meet the responsibilities of their position with compassion, and commitment to those they are charged to lead.”

Related: 98 airmen have died by suicide so far in 2020, Air Force chief says